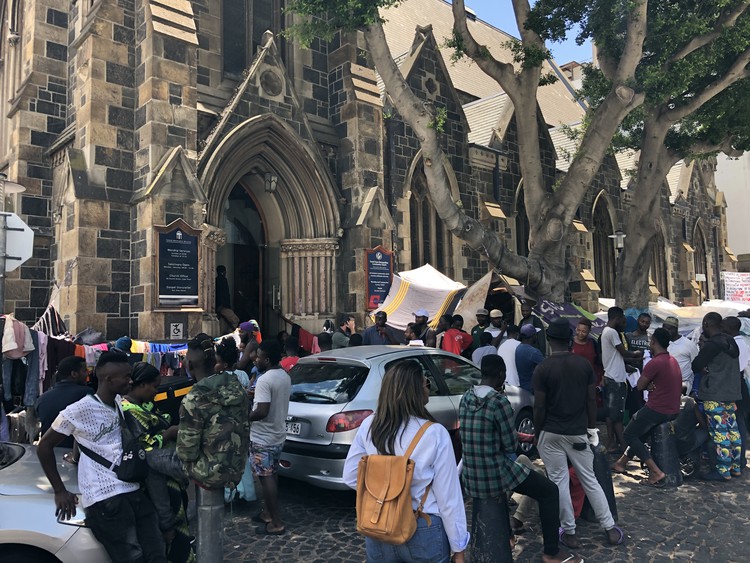 The City of Cape Town will soon begin “enforcement operations” against a group of refugees camping outside the Central Methodist Church in Greenmarket Square. Photo: Lucas Nowicki

The City of Cape Town says it will soon begin “enforcement operations” against the group of refugees camping outside the Central Methodist Church in Greenmarket Square. This is according to JP Smith, Mayco Member for Safety and Security.

This comes after two meetings this week with representatives from the refugees, SAPS, Home Affairs and the United Nations High Commissioner for Refugees (UNHCR).

The refugees have been protesting for months — previously outside the UNHCR offices on St Georges Mall — before they were forcefully removed in a chaotic scene on 30 October. They have been demanding to be resettled in another country. Since then, most of the families have been living inside and outside the church.

The meeting on Wednesday was to address the demands put forward by the refugees which included the provision of a safe temporary shelter as well as for the UNHCR and Home Affairs to process their documents. After the closed meeting at Cape Town Central Station, we spoke to Aline Bukuru, founder of Women and Children at Concern (WCC) and leader of the refugee group that protested in Pretoria. Bukuru told GroundUp that she was “hopeful” that the City would meet their demand for a temporary shelter, adding that they “were working together”.

But Smith painted a different picture, accusing leaders of the refugee group of spreading misinformation. He said that providing a temporary shelter was “not on the cards” because the City fears that it would become permanent. Smith said that the City was planning to make space available where the families could be interviewed and screened individually by Home Affairs and the UNHCR, but “not for any kind of bulk relocation” to other countries.

Smith said having refugees living outside the church in Greenmarket Square was “simply unsustainable” and that it was up to SAPS and metro police to intervene.

The UNHCR and Home Affairs offices could not be reached by time of publication.