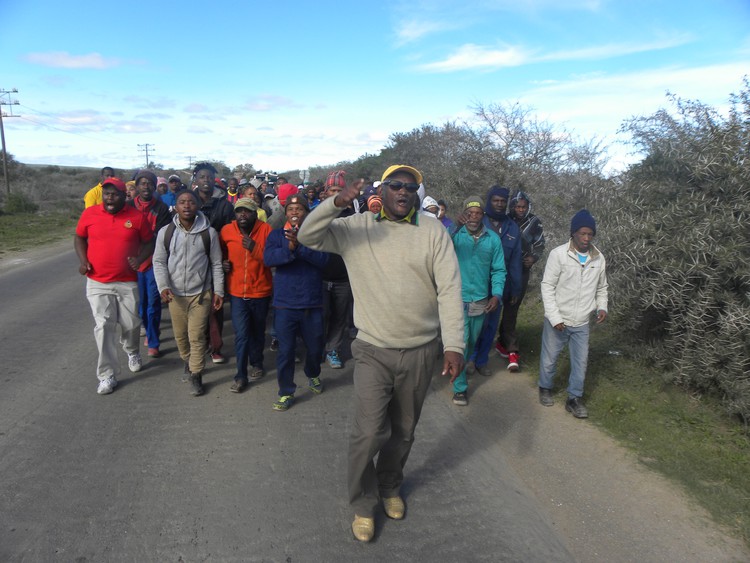 Farm workers in Addo and Kirkwood went on strike for a day on Tuesday, demanding farmers pay them the minimum wage of R20 an hour. Photo: Joseph Chirume

Farmworkers in Addo and Kirkwood in the Eastern Cape went on a day’s strike on Tuesday, accusing some employers of refusing to pay them the recently agreed minimum wage of R20 per hour.

They also demanded the reinstatement of workers expelled during a previous strike in June and the withdrawal of a High Court interdict against officials of the South African National Civic Organisation (SANCO).

Hannes de Waal, spokesperson for the Sundays River Citrus Producer Forum, said the march was a violation by SANCO of a High Court interdict which his organisation had obtained.

He said “a number of individuals with their own agendas” were working against the interests of both producers and employees.

“An interdict was issued against such individuals as they do not have the right to threaten workers and farmers, nor do they have the right to access workplaces. They are therefore expected to stay a minimum of 500 metres away from such places and respect the fact that they have nothing at all to do with the relationship between employer and employee.”

He said the Forum was in contact with SANCIO leadership and had come to the conclusion that SANCO was “a great organisation with fine principles” and that this was a breakaway group.

Vuyisile Sikani,who is the regional chairman of SANCO and chairperson of the Sundays River Workers Forum read the petition to the protesters before handing it over to Mark Keun, the human resources manager of Sundays River Citrus Company.

Sikani said employers should withdraw the court interdict against SANCO, reinstate workers expelled after the June strike, and apply “with immediate effect” the minimum wage of R20 per hour.

“The employers should also stop victimising employees,and workers should be transported in safe and covered vehicles to and from work.”

He said if these demands were not met in 48 hours “we will embark on a mass action resulting in a total shut down. We will stop production on every farm and factory.”

SANCO regional treasurer Zoliswa Scritch said seven people in Kirkwood and one in Addo were facing charges of public violence and malicious damage to property as a result of the June protest.

“We want their cases withdrawn because there is no evidence that they were involved in the destruction of property.”

Scritch said some employers were still paying “a slave wage” of R17 an hour.

A seasonal worker who did not want to give his name told GroundUp he was still earning R17 an hour and his employer was threatening to withdraw the end-of-season bonus if the workers insisted on a pay increase.

De Waal said, “We need to study the demands received and will certainly reply to them. It is our view that all growers are complying with the R20 minimum wage, unless anyone can prove that fact to the contrary.”