Citrus strike ends as farmers agree to R20 an hour 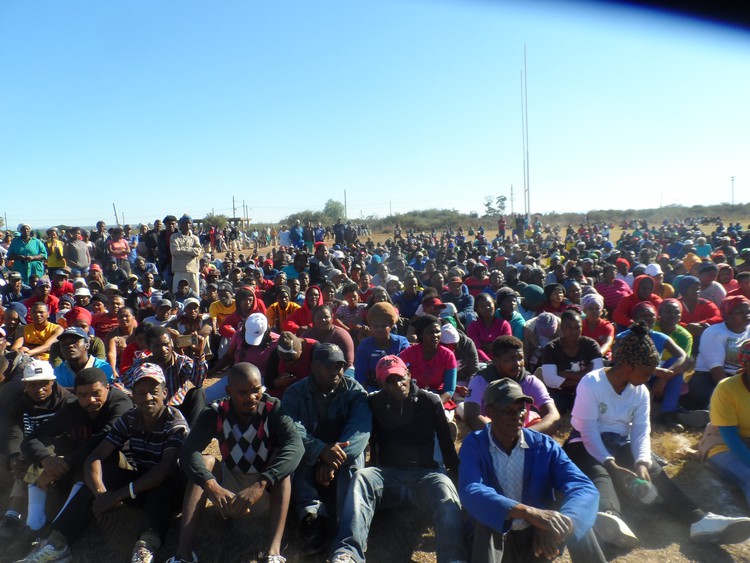 About 2,000 farmworkers gathered on Wednesday at the Valencia sports field in Addo where MEC Xolile Nqatha addressed them before going to talk to farmers. Photo: Joseph Chirume

Workers in the Sundays River Valley in the Eastern Cape called off their strike on Thursday after reaching an agreement with their employers.

The strike started last week with workers demanding a minimum wage of R20 an hour. Most were earning R16,80 an hour.

Yesterday Nqatha abandoned a rally in Kirkwood after protesters who had gathered to listen to him threatened his delegation. The MEC eventually left Kirkwood without addressing the workers.

He went on to Addo where he addressed about 2,000 workers gathered at the Valencia Sportsfield.

He told them he was talking to farmers to persuade them to agree to the R20 an hour wage, and to stop employing workers from other countries at lower wages.

“We don’t hate our African brothers but we encourage them to accept government set wages. We don’t want them to be exploited when there are platforms to engage with the farmers to improve their living conditions,” said Nqatha.

On Thursday the Sunday’s River Valley Citrus Producers Forum agreed to pay a minimum wage of R20 per hour, for two years, effective from 7 June, 2018.

Chairman of the forum Hannes de Waal said the forum regretted the violence and damage to the farms but looked forward to “welcoming all our workers back to the farms tomorrow, Friday, 8 June.”

He said the new statutory minimum wage for farm workers - to be effective soon - was R18 an hour but citrus workers had demanded the national minimum hourly wage of R20 recently passed by Parliament.

De Waal said farmers did not recognise the South African National Civic Organisation (SANCO) as the official representative of farmworkers because there were trade unions and forums established by employers and employees already in the area.

As a result the MEC had worked with the forum and SANCO to find a solution.