“We are part of Sea Point. We want to live here.” 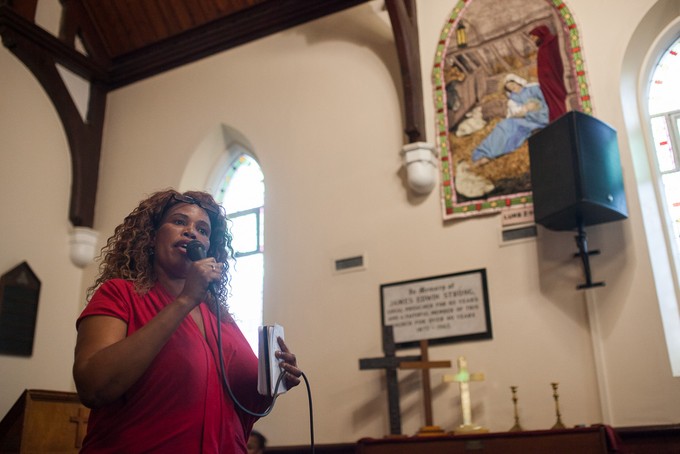 Over two hundred people filled the Methodist Church in Sea Point on Wednesday night: black, white, domestic workers, some with babies, blue collar workers and the well-to-do. They came to discuss whether affordable houses should be built on the nearly two hectare Tafelberg property, the last sizeable state-owned land in the suburb.

“We don’t want to live in luxury apartments,” said Elizabeth Gqoboka of Reclaim the City. But she explained that because “we are part and parcel of Sea Point. We want to live here. We take care of families here. We have children here who attend school. But [property] prices are so high and we cannot afford them.”

Gqoboka explained that she has been living in Sea Point for 22 years. She worked first as a domestic worker and now she is a carer. “We working class people like Sea Point for us and our kids because it is accessible and has good hospitals.” She described the difficulties domestic workers currently have if they want to live with their families in the suburb.

Gqoboka was one of several speakers that put forward the case that Tafelberg, which used to be the location of Ellerslie school, should include affordable housing. The property was going to be sold to the Phyllis Jowell Jewish Day School (PJJDS) but following pressure by housing activists, the province held up the sale.

The province is currently deciding the future of the property. In November it released a feasibility study that considers a mixed use development that includes 270 rental units for people earning less than R7,500 per month. It would also contain shops. The old school building, which is a heritage site, could become a community facility (which could be used as a school according to some speakers at the meeting). The province has asked the public to comment on this by 30 January.

On Tuesday the vice-chair of the PJJDS, in a widely circulated email, discouraged members of Sea Point’s Jewish community from attending the meeting — called by activist organisation Ndifuna Ukwazi — warning that their participation “may be detrimental to the community’s interest”. But many Jews attended the meeting, and nearly all who spoke expressed support for the mixed-use development.

The meeting was chaired by Andrew Boraine of the Western Cape Economic Development Partnership. Ndifuna Ukwazi researcher Julian Sendin explained the details of the feasibility study to the meeting. Giving statistics on the housing backlog in the city, he argued that state-owned land needed to be used for affordable housing and this is why Ndifuna Ukwazi opposed the original sale of Tafelberg. He said the sale of part of the property could be used to subsidise the affordable rental units.

Martin Kearns, a property developer originally from Ireland, explained how in Dublin and London you find low-income and wealthy people living in the same neighbourhoods. He said that if done well, low-income housing doesn’t affect property values. This point was emphasised by Sea Point resident Barbara Southworth who has worked on a number of schemes for the Tafelberg site. She said that the alternative to Tafelberg being used for social housing is that more people will have to live in places on the city’s margins like Blikkiesdorp. This means more people have to travel to the city, congesting the roads and increasing infrastructure costs for government.

Southworth argued that it is in everyone’s interests to rather densify the city and not spread it further. “If designed properly,” she said, a mixed use development at Tafelberg “can work.”

“We’ve looked into it,” Southworth said.

After the official speakers, members of the audience gave their views. A man who identified himself as a worker in Sea Point since 1980 said he agreed with one of the speakers that both the ANC and DA governments had failed to provide affordable housing in the city. (A much repeated fact at the meeting was that no new affordable housing has been built in Cape Town’s inner city since the onset of democracy.)

There was some debate as to whether a school would be feasible on the property under the province’s feasibility study. Some of those who supported having a school called for it to be open to all.

Borraine and others emphasised that Tafelberg would just be the start of affordable housing in the inner city, and that it could be a model for further developments. Sea Point resident Lorna Levy called for a property at Rocklands Villa, a dilapidated apartment building owned by the SABC, also to be turned into affordable housing. In 2006 this was the site of a sit-in by Sea Point’s blue collar workers who demanded decent housing. Gqoboka, who was part of that protest, described her disappointment that nothing came of it. “For once we want our voices heard,” she said.