Woman is now being treated in Groote Schuur 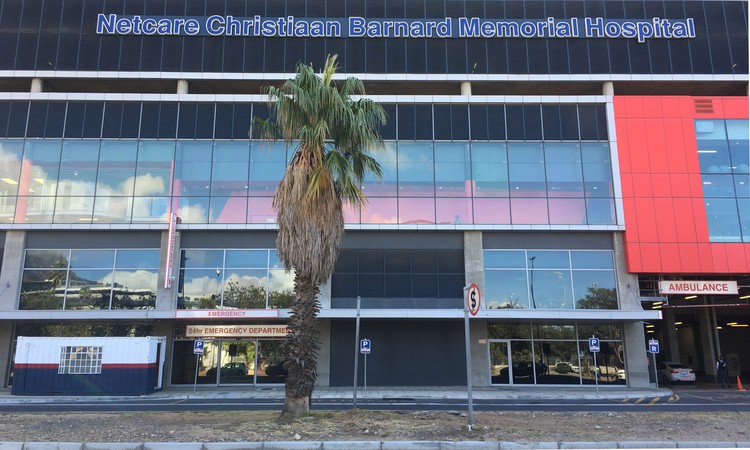 Sheila Moore, 71, and her husband, Richard Moore, 73, returned from the United Kingdom on Tuesday 10 March healthy. A few days later both she and her husband had tested positive for the new coronavirus, and Sheila was developing a worrying shortness of breath.

On her healthcare advisor’s recommendation, she asked the Netcare Christiaan Barnard Memorial Hospital on Cape Town’s Foreshore to admit her, but the recently built “state-of-the-art” “world class healthcare facility” turned her away, saying it hadn’t prepared quarantine facilities at the 248-bed hospital. While the hospital later recanted its decision, Sheila didn’t want to put its patients at risk.

The Moores are retired. They live in Sea Point for half the year. Sheila and Richard are very active. They typically work out with a personal trainer daily and walk at least 10,000 steps a day. Richard is in remission from cancer, and Sheila has a history of poor lung function and renal issues.

Here’s how their story unfolded:

On Thursday, 12 March, two days after getting back, Richard started feeling unwell, with a high temperature and other symptoms of Covid-19. They called the coronavirus hotline, which recommended that he get tested the same day. Sheila and Richard, who have private medical aid, chose Christiaan Barnard for the testing because it is near to home, and because they had an existing relationship with the doctors there following Richard’s cancer treatment last year.

The Moores, well aware that they might have Covid-19, went to Christiaan Barnard in masks and entered through a back entrance to minimise their proximity to other people. Richard was tested, and the couple went home to isolate themselves and wait for results. The next day, Friday 13 March, the laboratory called them to confirm that Richard had tested positive for Covid-19.

From then on, both she and her husband were being monitored remotely by doctors manning the provincial emergency phone line, with check-up calls at least three times a day.

On Saturday 14 March, Sheila began to feel sick. Her initial symptoms were a dry cough, headache and sore throat, though she did not have a high temperature. Sheila was told to get tested, and so made another appointment at Christiaan Barnard. She was tested on Sunday, and the laboratory confirmed that she had Covid-19 on Monday.

On the morning of Tuesday 17 March, Sheila’s condition had worsened. She was short of breath and had an upset stomach. Her healthcare advisors were particularly concerned due to her medical history. She needed to be assessed by a doctor and possibly hospitalised.

Sheila called the hospital for assessment and possible admittance under the advice of her healthcare advisory team. The hospital told her that they could not admit her, as they lack the isolation or quarantine facilities needed to deal with Covid-19. Instead, they recommended that Sheila go to Tygerberg Hospital. Confused about what to do, she called her healthcare advisors.

Sheila was then told by a healthcare advisor that they had been contacted directly by an emergency doctor at Christiaan Barnard and had been told that management had instructed them to direct confirmed Covid-19 cases to Tygerberg Hospital. Sheila herself was contacted by a doctor at Christiaan Barnard, who apologised profusely, and repeated that the hospital was not prepared for admitting Covid-19 patients. He said that he would be taking the matter up with senior figures at the hospital.

Groote Schuur was then contacted, and the hospital agreed to assess and accept Sheila without hesitation.

Later on Tuesday, Sheila was called again by her healthcare advisors, who had been told that Christiaan Barnard officials had changed their minds and decided that she could present herself there. But Sheila did not want to put other patients at that hospital at risk given that they weren’t ready, and decided to go to Groote Schuur on Wednesday morning.

Sheila was admitted to Groote Schuur on Wednesday, where she is in a stable condition.

A doctor at Groote Schuur who wished to remain anonymous said that Christian Barnard’s decision was unacceptable. The doctor said that private healthcare has an important role to play and can’t step back. The doctor said that if Sheila was blocked because the facility was not prepared, then it spoke to negligence, or possibly incompetence. By comparison Groote Schuur had been fully prepared to accept Covid-19 patients for the last ten days and had begun preparations three weeks ago.

Another doctor speaking on condition of anonymity said that while many private hospitals have prepared for Covid-19, Christiaan Barnard had been lagging, and that a “little bit of pressure would be warranted” to ensure the hospital can serve a potential influx of patients.

Richard Moore remains in isolation and recovering at home. He uses a grocery delivery service to stay fed, taking strict precautions to ensure that he does not transmit the virus to any visitors.

Sheila faces a few weeks in isolation as she recovers, but once she is healthy, hopes to be able to contribute to the aid efforts that will be required. Well aware of the spread of the virus while she was in the UK, she and her husband were practising intensive hygiene. Nevertheless, she thinks that they may have been infected while in London.

UPDATE on 22 March: Christiaan Barnard was repeatedly asked for comment. On Sunday 22 March we received the following statement:

“At no stage were people in need of emergency medical assistance, including COVID-19 positive cases, refused care at our hospital’s emergency department, and we sincerely apologise to the couple who were kept waiting for further advisement, for any inconvenience and anxiety that this has caused them,” says NCBMH general manager, Chris Tilney.

“A misunderstanding may have arisen when the independent doctor who is responsible for the running of the emergency department, quite correctly, and in accordance with the protocols regarding our response to suspected or confirmed COVID-19 cases, requested the couple to wait while he consulted with clinical colleagues.

“Since this was not an emergency admission the doctor involved was confirming protocols and clinical and collegial support to ensure that all safety measures were in place to ensure the safety of staff and other patients, before accepting the patient. During this time the doctor at NCBMH remained in discussion with the Department of Health representative and advised that NCBMH was ready and awaiting the patient. The DoH representative advised that Groote Schuur Hospital’s clinical team had agreed that they could also assist and that the choice of facility should be left to the patient.

“We wish to assure the public that NCBMH is fully prepared to accept COVID-19 patients with the necessary dedicated, appropriate facilities and trained staff in managing COVID-19 patients safely, should they require admission. We have implemented all necessary precautionary measures in close consultation with the DoH and National Institute of Communicable Diseases as part of the national response to the unfolding COVID-19 outbreak.

“We extend our best wishes to the patient and trust that she will recover fully and speedily,” Tilney concluded.