Learners sit on the floor at overcrowded Masiphumelele school 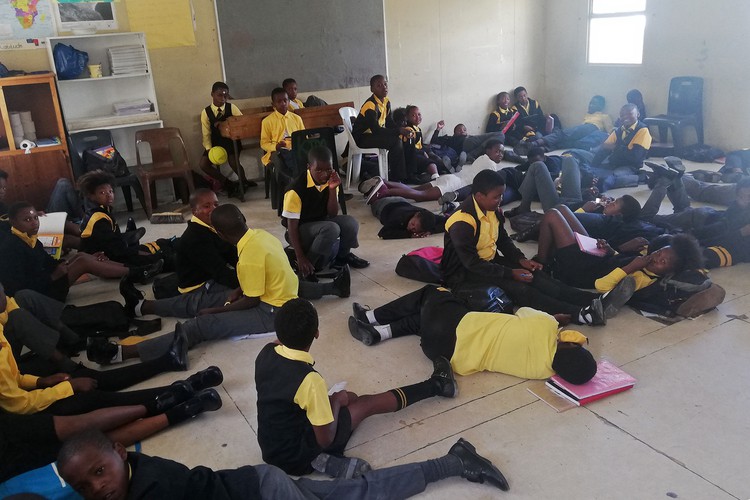 Learners have to sit on the floor at Ukhanyo. One asked GroundUp not to show her face because she was afraid her friends in the Eastern Cape would laugh at her because she has no desk. Photo: Thembela Ntongana

Some learners at Ukhanyo Primary School in Masiphumelele are sitting on the floor because the overcrowded school does not have enough desks and chairs.

Principal Phuthumile Tyhali and members of the School Governing Body (SGB) say they have been asking for a second primary school in the area for years.

“This community is growing every day and can no longer cope with just one primary school,” said Tyhali.

“We would like to be able to accommodate more learners but it is just not possible. There is no more space in the school even to put more prefabs.”

Currently the school has 1,916 learners with 47 teachers. Most of the learners are from Masiphumelele, with some from Red Hill, Simon’s Town, Westlake and Capricorn. Ukhanyo is the only primary school in these areas that offers Xhosa as a first language.

In one class there are no desks while in others the learners are squashed together with little or no space for movement. Some classes have 50 learners.

Tyhali said the school had applied for more school furniture from 2013.

“The classrooms are too small and cannot accommodate the number of children we have in a class. We have had some desks and chairs donated by other schools. I have to go around asking,” said Tyhali.

But spokesperson for the Western Cape Department of Education Jessica Shelver said the school was given furniture in 2016.

She said schools are afforded an opportunity to apply for furniture on an annual basis, and applications are prioritised by the Education District Office based on the needs of the schools which applied and the availability of funds.

The SGB had asked for a second primary school in the area but because there was no land available in Masiphumelele, the school was built in Ocean View, she said. Shelver said the new school would relieve some of the pressure at Ukhanyo, but SGB chairperson Themba Sontundu disagrees.

“The other school does not do Xhosa,” he said, “and the majority of these children come from Eastern Cape where Xhosa is a first language and cannot cope with Afrikaans. Hence parents are coming back to the school and we are forced to accommodate them.”

Sontundu said transport to Ocean View was also a problem.

Transport to Ocean View would cost around R400 a month. “Most people in the community are unemployed and can not afford to pay transport,” said Sontundu.

“The School and District are in the process of submitting an application for learner transport,” said Shelver. “We need to complete a detailed list of all learners that will make use of this transport. Transport can only be requested and recommended based on detailed information on each learner and where they live, once they have been registered at the school,” said Shelver.