“We are fed up! Enough is enough!” 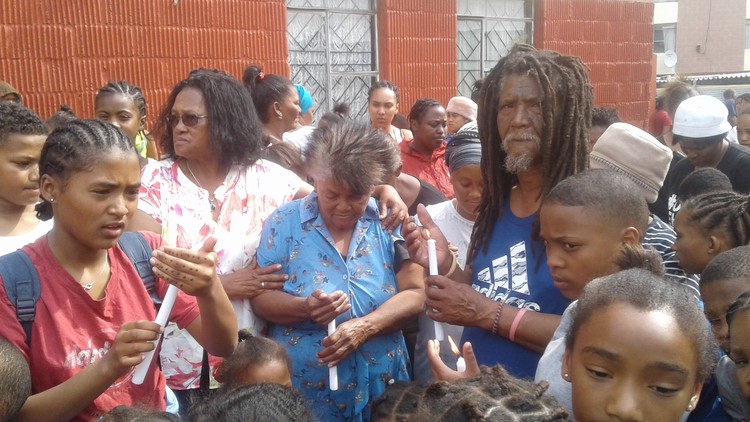 Rachel Kayk, grandmother of Adrian Alexander who was murdered on Tuesday night, is assisted at a vigil in Elsie’s River on Thursday. Photo: Sandisiwe Shoba

Activist group #UniteBehind held a children-led march in Elsie’s river on Thursday to the home where three children and a teenager were killed in a gang-related attack on Tuesday night.

“Ons is moeg! Genoeg is genoeg!” [We are fed up! Enough is enough!] The group of around 30 chaperoned children shouted while holding placards that read: “Stop killing us” and “Let there be peace”.

They gathered outside a small Wendy house - attached to the home in Clarke Estate - where a 9 year-old girl, Toslin Samuels, and two 12 year-old boys, Malcolm Samuels and Adrian “AJ” Alexander, were shot in the head as they slept. The target for the attack was a 19-year-old man who was an alleged gang member.

Two women were also injured during the shooting.

According to members of the community, the injured family members have been discharged from hospital, but are being kept in a secret location for fear that they may be harmed if they return to the area.

A brief prayer and vigil was held outside the home where a cardboard poster with images of the three children was propped above the entrance as a memorial.

Adrian Alexander’s grandmother Rachel Kayk was present at the vigil. She was still reeling from the murder and declined to be interviewed.

Her grandson was a grade 4 learner at Holy Trinity Primary School. A group of his classmates were among the protestors. They held a poster that read “RIP Adrian Grade 4B. Love you”, and a black and white image of him.

GroundUp did not enter the home but was told that the walls were still covered in dried blood.

#UniteBehind has been active in the area since 2017. The organisation released a statement on Wednesday condemning the murders and expressing disappointment at the inefficiency of SAPS and the army on the Cape Flats.

“The army cannot solve these problems and the murders [on Tuesday] demonstrate that it is the failure of SAPS to predict and prevent gang violence through evidence-based policing. The army is not a long-term solution to the problems faced in some of Cape Town’s communities. It is still not clear what the mandate of the army is.”

The activist group also highlighted the need to “redistribute police resources” to address the current neglect of areas such as Elsie’s River.

The three suspects arrested for the murders will appear in Goodwood Magistrate’s Court on Friday 20 September. #UniteBehind and residents plan to deliver a signed petition to the court demanding that the suspects be denied bail.