Children locked out of school for late-coming

MEC says action will be taken against schools, but principals have limited options available to fix the problem 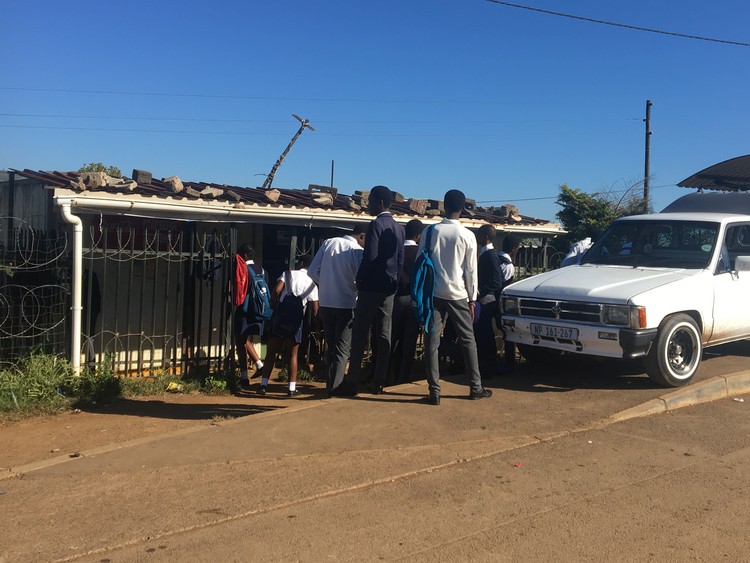 Learners who arrived late on Monday at Ikusaselihle High School in Imbali Unit BB, Pietermaritzburg, found themselves locked out of classes.

“We are told that it is the school code of conduct,” said a grade 12 learner.

About 20 learners told GroundUp that they have been locked out of school for weeks and some have missed tests. The majority are in matric. They said they travel long distances on foot.

A learner in grade 11 said, “I can’t walk before dawn because it is dangerous. We have robbers all over the township. It is scary to walk in the early hours of the morning. They rob and mug people … Some are capable of rape. We all have different reasons for arriving to school late. It is not intentional.”

“My parents would kill me. You can’t tell a parent that you don’t attend learning classes,” said the grade 12 learner. “Some of us have been locked out for two weeks. The school starts at 7:30am. The security guards lock the gates at 7:50am. Today, some of the matriculants were writing a math test.”

“The principal was asked to at least come with another form of punishment. Locking us out doesn’t do us any good … We are left behind,” said the learner.

The locked out learners hang around a shop. Thokozani Sibisi, who lives next door to it, said on some days they can be over 50 or more learners locked out.

“They sit on the side of the road with their backpacks. Boys and girls smoke cigarettes the whole day. Some would knock on our gates and ask to use the toilets. They have become regular buyers of cigarettes. It hurts because there a young girls. They stay hours waiting for the school to come out. Their parents are not aware of what is going on. It is a sad situation that needs to be attended to. We can’t have learners spending hours doing nothing. It is killing their future,” said Sibisi.

Education MEC Mthandeni Dlungwane said the Department of Education is totally against learners being locked out for late arrival at the school. “There is no code of conduct that allows the principal to do that. There are other parts of disciplinary process that the school can use. We have raised it with principals and teachers. They have been told that if any of the school is found doing that, the principal or a teacher will be charged.”

The MEC said he will make unannounced visits to schools that are reported for locking out learners.

Despite repeated attempts, GroundUp has been unable to get comment from the school.

Late-coming is a serious problem at many South African schools, and many principals are looking for ways to eliminate the problem. In 2010 Equal Education in Cape Town ran a campaign against late-coming.

According to the organisation’s website: “Equal Education members gathered outside their schools by 7:30am. They sang, displayed posters about punctuality, and handed out information about the damage done by late-coming. … Learners enforced the campaign by confronting teachers and their fellow learners who arrived late. The campaign made late-coming the subject of discussion and debate within schools and drastically reduced the number of late learners. At a high school in Khayelitsha, the number of later learners decreased from 121 at the beginning of the campaign in early May to just one person by the end of the month.”