Children in rural areas struggle to get to school 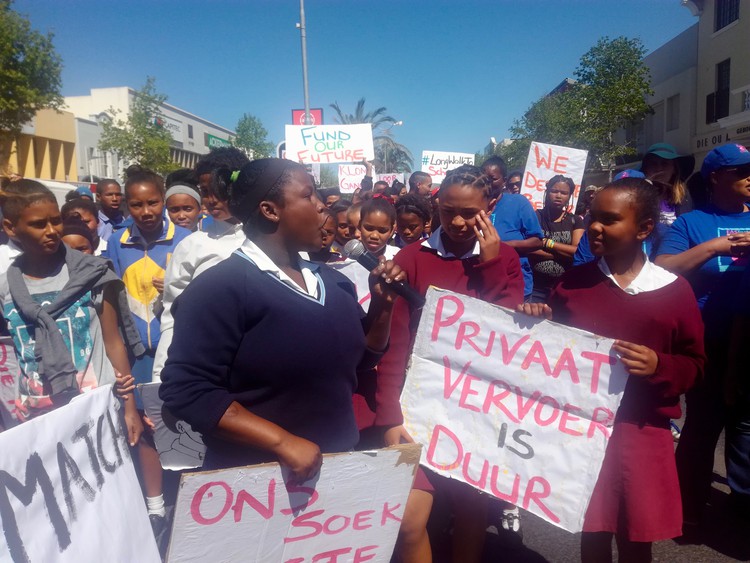 Frederika Moses (centre) from Wellington says her mother spends up to R600 on private transport so that she can get to school every week. She was among 100 learners marching for scholar transport on Thursday. Photo: Barbara Maregele

“My dad told me I had to stop going to school last year because he didn’t have money to pay for transport,” says Leandrea Petersen. She lives on Weltevrede Farm more than 40 kilometres from the nearest high school, which is in Worcester.

Petersen said she and six other learners would often hitchhike to school and back, because they couldn’t afford it. She is currently not attending school. She would like to return to grade 8.

Petersen was among over 100 learners from the Cape Winelands district who brought lunchtime traffic at busy intersections in Worcester’s centre to a standstill on Thursday.

Supported by the organisation, Women on Farms Project, the learners were demanding that scholar transport be provided for learners who live on farms around Wellington and Hermon.

According to the Western Cape Education Department spokesperson Jessica Shelver, the department provides transport for about 57,000 learners on over 500 routes in the province. Shelver said the policy was to only provide learner transport in rural areas where learners live more than five kilometres from the nearest school and where there is no public transport or hostel accommodation.

On Thursday, the learners marched through the streets of Worcester, holding up posters and chanting, “Ons wil ’n bus hê!” (We want a bus!). At the education department district office in Durban Street, several learners were given the opportunity to voice their concerns before handing over a memorandum to officials.

Frederika Moses, who lives at Kanaan Farm near Wellington, said her mother pays as much as R600 a week to hire private transport to get her to school. “My father is unemployed. My mother is the only one working; so it’s very hard. When there’s extra classes after school, we miss our lifts and have to walk home. It’s not safe. We want busses,” she said.

Elizabeth Frager, a parent from Hermon, about 45 kilometres from Wellington, said, “The only transport for our children is a train. It arrives at 6am in Hermon and returns from Wellington again at 6:20pm. This means our children have to wait all afternoon on the station, which they don’t like doing because they want to get home. So they hitchhike back.”

“Our children are at Bergrivier and Wellington High – so many of them stay at the hostel for R200 a month. And if the parents can’t afford it, then the child is sent home … People in Hermon are farmworkers with low salaries.”

Colette Solomon, director of the Women on Farms Project (WFP), criticised the department’s transport policy, saying it only calculated distances from the farm gate and did not “take into account the three to four kilometres children walk from their farmhouses to the main road”.

WFP’s Chaleen Arendse said, “There is no transport for high school learners on the Hermon (R44) and Oakdene Road. There are more than 30 farms along that route.”

Arendse said WFP was shocked to discover that none of the schools they visited had applied for scholar transport. “It’s not meant to be Women On Farms responsibility to come asking for busses. The school and the department must do their jobs. The children are being attacked and robbed along the road. Their parents can’t afford the private transport fees.”

Juan Benjamin, director of the Cape Winelands Education District, accepted the memorandum. He thanked the group for “showing interest and support” for the learners’ education. Benjamin promised to respond by 18 October.

“Bus transport is one of the biggest [budget items] in our district. We spend over R60 million a year for about 15,000 learners. We are prepared to address these points,” said Benjamin.