Two years after we reported the “moving coffin” school bus, things are worse

Children drop out of school because of scholar transport chaos 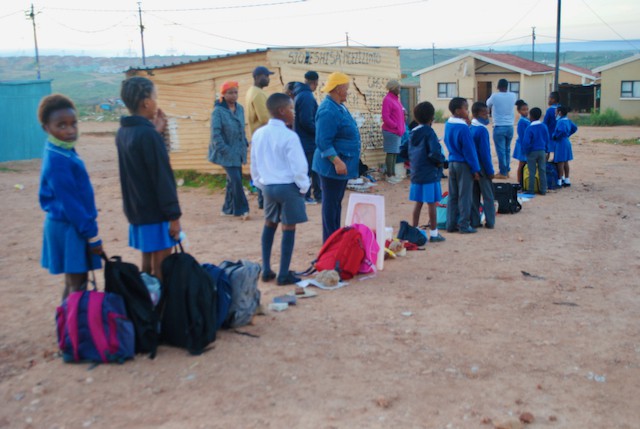 Parents from RDP houses and seven informal settlements in Nkandla township, Gqeberha, say the community is big enough and ought to have its own primary school. They are also fed up with the Eastern Cape government’s unreliable transport.

The education department says it has no money to build a school and has promised to make sure all the learners are ferried to Spencer Mabija Combined School in KwaMagxaki, three kilometres away.

Parents say they have to wake up as early as 3am on school days. They carry knives, sticks and whistles for their protection as they set off in the dark on foot for the bus stop to queue for their children. They go early, hoping to ensure a place for their child on government’s scholar transport. But many learners are left behind and miss school.

On Tuesday, at 5am there was already a row of about 40 school bags and stones used to mark places in the queue. At 6am learners from grade R to 7 started to claim their positions in the line. Some parents rushed off to catch taxis for work; others remained behind, many still in their pyjamas.

But the 56-seater bus never arrived. Instead, we saw learners crammed like sardines into minibus taxis that were in poor condition. There were two 15-seater taxis for about 60 children. It was after 8am. Parents say the bus is almost always late and in the current school year didn’t come at all for three weeks.

“Single parents are the most affected ones because they can’t wake up early and walk about four kilometres to come and queue. Only those who have husbands or male siblings are always able to secure seats for their children,” said Phila Veto, a father of three learners who volunteers as a queue marshal.

“We then decided to accommodate them. For learners who are left behind [by the bus] we take a collection of R2 in order to get them public taxis. But sometimes there is no money to do that,” said Veto.

There are about 4,500 RDP households and each of the seven informal settlements has over 1,400 shacks.

Veto said people were relocated by the Nelson Mandela Bay Municipality from various wetlands to ward 41, a place without a school. The nearest school, Joe Slovo Primary, is overcrowded.

Veto said the principal of Spencer Mabija Combined School said they should register their children at her school because it had declining numbers. “She promised us scholar transport and we all liked the idea and enrolled our children at the school,” said Veto.

In February 2020, we wrote about Nkandla parents refusing to let their children board a scholar bus which they called a “moving coffin”. A new transport contract was awarded, but the situation is even worse according to the parents.

Ntomboxolo Nyendwana, a single parent, said, “How can a five to 13-year-old wake up very early in the morning and queue?”

“Most of the days we keep our children at home because the transport is full or does not arrive. I wake up at 3am every day and queue here for my two children.” She marks the place with a stone. “Then around 5am I go back home to prepare my children for school because the bus sometimes arrives at 6am or 8:30am,” she said.

“Many parents decided to hire their own transport for R250 to R300 a month to avoid this chaos,” she said.

She said the transport department promised to investigate, but “nothing has changed and our children are still suffering”.

Melikhaya Mpofu, a community leader and former ward committee member, said, “We have about 3,500 primary school learners who study outside of this ward due to a lack of a primary school. Then we have a huge dropout rate because many learners end up quitting the school because of this scholar transport problem.”

Provincial Education spokesperson Malibongwe Mtima said, “The Department is aware of the situation. On 1 April new contracts will kick in and the school will get a new budget to ferry the learners.

“Due to financial constraints we don’t have any plans to build a new school. But we will make sure all the learners are ferried to school.”