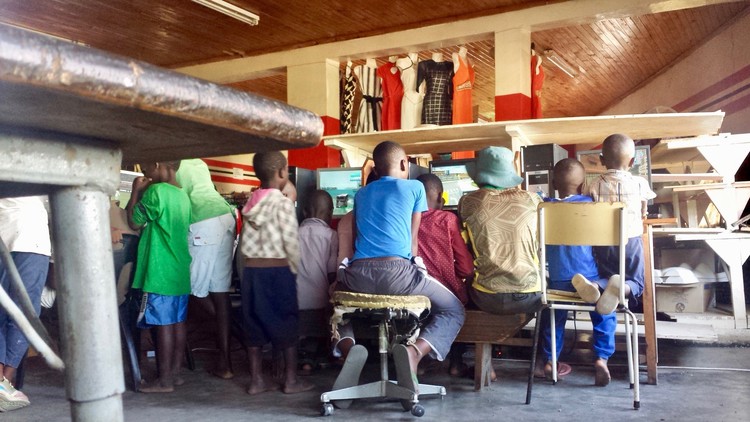 Children in one of the many internet cafés in Espungabeira on the Mozambique-Zimbabwe border. Photo: Ray Mwareya

Isaiah* says he is 15, but he looks several years younger. He lives in a rural village outside Espungabeira, on the border of Mozambique and Zimbabwe. Isaiah’s father works and lives 1,400 km away in South Africa; he thinks his son is in school. But Isaiah is out earning a rough living as a smuggler.

Isaiah rows a small wooden canoe, smuggling diesel and petrol across the muddy Rusitu River. In the rainy season, the swollen river can be very dangerous. But with diesel costing 60 US cents a litre in Mozambique and US$1,30 in Zimbabwe, there is a high demand for smuggled fuel and Isaiah earns 75 US cents for each illegal run he makes. He can earn US$6 in a day.

Child labour is flourishing in this rural area and so are internet cafés which line the river bank. This is where the children blow their earnings on video games such as World of Zoo. Both activities – smuggling and playing computer games – keep the children out of school.

Arnold Sako, who was Isaiah’s geography teacher at Chikwidzire Primary until the boy took to smuggling in October last year, says child labour is the new gold in Manica Province.

Mozambique border police, from their canvas tent pitched on the river, look the other way when the kids paddle past them.

“When I gave up school, it took me four days to learn how to steady a wooden boat,” says Isaiah. He smuggles 40 litres at a time, and does this up to eight times a day.

He spends US$2 a day at internet cafés and what is left he shares with his mother.

Lorries come from Chimoio town, 130 kilometres away, loaded with 30-litre drums of petrol. Isaiah and a friend, Gondai* – also a “river sailor” he boasts – transfer the petrol into ten-litre plastic containers and load them into their canoes. Their elders stand around smoking during the operation.

It is a five-minute trip by canoe to the Zimbabwean side of the river bank. Here, there is a frenetic effort to get the petrol into trailers as fast as possible. Drivers fear raids, fines and seizures conducted by the Zimbabwe Revenue Authority.

Back in Mozambique, Isaiah and Gondai scrape the river mud from the soles of their gumboots and enter a cattle shed that has been converted into an internet café.

“Here is my dollar. Load me the Nancy Drew game. I want to be a detective,” says Isaiah.

The café is filled with the noise of guns, helicopters, and explosives as the kids play war games.

“Computer screen games pump my blood after a day sailing the river … I want to be Mozambique’s flashiest boxer one day and protect my mother. She is my angel,” says Isaiah.

Chenje Mlele, the 40-year-old owner of an internet café next to the Rusitu River, admits that “40 children on internet games earn me $400 monthly. Business is good.”

His café is solar-powered and his computers connect to the internet through the mobile phone network.

“School is boring, smuggling earns me money. Computer games are exciting,” says Isaiah. “My father works in a mine in South Africa. He comes home every four years and sends $65 for my fees. It´s not enough. Mother and I went hungry, until I left school to work.”

Ray Mwayera’s trip was funded by the Women Taboos Radio Foundation, which has no direct connection to GroundUp.

Surnames have been withheld to protect identities.