Colette Solomon was arrested during an anti-eviction protest 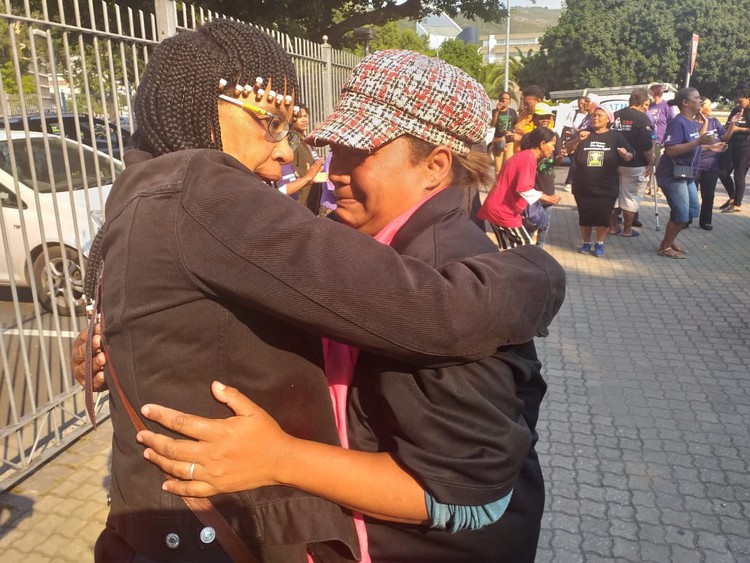 The sound of ululating and people chanting, “Viva Women on Farms, Viva” echoed through the passages of Paarl Magistrates’ Court on Thursday morning where the organisation’s director, Colette Solomon, was to appear on charges of public violence.

But moments after proceedings began, the state prosecutor announced in court that charges against Solomon were withdrawn and she was free to leave. The public gallery, which was filled with Solomon’s family, colleagues and supporters, erupted in celebration as they left the building.

Solomon was arrested on Wednesday afternoon during a protest against the eviction of Francina Petersen, 41, and her family from the Anura Vineyards near Simondium. In a video posted on Facebook, Solomon along with several other women, can be seen sitting in the middle of Simondium Road which runs past the front gates of Anura. Then what appears to be four police personnel can be seen lifting Solomon by her hands and feet and carrying her into the back of a police vehicle.

Following interventions by the Women’s Legal Centre, Solomon was released after 8pm on Wednesday and warned to be at court the following morning. But the charges against her were withdrawn at the eleventh hour on Thursday.

Outside court, supporters became tearful as Solomon waved her charge sheet in the air. Among them was Francina Petersen, who burst into tears as she hugged Solomon. “No one has ever done something like this for me before,” said Petersen as she thanked Solomon.

Petersen, her husband and their children were evicted from their home at Aura on Tuesday following a two-year court battle with the farm owners. The family and their belongings have spent the past two nights on the side of Simondium Road where they remain.

“I had to take my 11-year-old daughter to stay with her ouma. My eldest son is in matric and I’m worried about him because for him it’s like his schoolmates are now looking at him differently because of all of this. But I try and encourage him everyday to keep going,” Petersen said.

“The farm offered us a wendy house and the municipality offered for us to put it up at an informal settlement in La Rochelle which has no electricity. There are so many people that share toilets there. I can’t even imagine what will happen to my children if we move there. All they’ve known is the farm,” she said.

Angered by yet another family on a farm left destitute by an eviction, Carmen Louw of Women on Farms said their members decided to picket on Wednesday in the hope of highlighting the rampant rate of evictions in the Drakenstein region.

“Many of the women from farms in Simondium are also facing eviction. Already in 2018, Drakenstein Municipality had more than 1,000 eviction cases on the court roll, translating into 20,000 people facing imminent eviction. The Petersen family were one of those 20,000 affected people,” she said and reiterated the call for a moratorium on farm evictions.

Anura is owned by the Bouma family who bought the farm in 1989. Solomon told GroundUp that Petersen had been working and living on the farm since the age of 19. “She helped build the farm into the multi-million rand enterprise that it is today, boasting a winery, cheese factory, beer brewing, jam-making, wedding venue and restaurant,” she said.

Solomon said they were concerned that the farm owners were trying to evict the rest of Petersen’s family, including her parents and brother, who also live on the same farm.

But responding to questions on Thursday via telephone, Anura owner, Mr Bouma, denied claims that Petersen had been working on the farm as a teenager. He accused the family of misleading people about events leading up to their eviction. “We offered to build them a home and the municipality was going to provide the land. That offer still stands. We were under the impression they would accept because it was discussed in previous meetings. What more can we do?” he asked.

Outside court, Solomon promised to continue fighting for the rights of women farm workers. She said her arrest “shows the abuse of state power”.

“So many police and private security were called to monitor a peaceful protest by 30 women. They were trying to intimidate us, standing there with their long guns. I was arrested while sitting in a circle with other women singing Senzenina. It just shows the extent [to which] the state will abuse its power because there was no basis at all to charge me with public violence. The fact that it was thrown out just confirms this.”

Protests are expected to continue at the farm on Thursday.