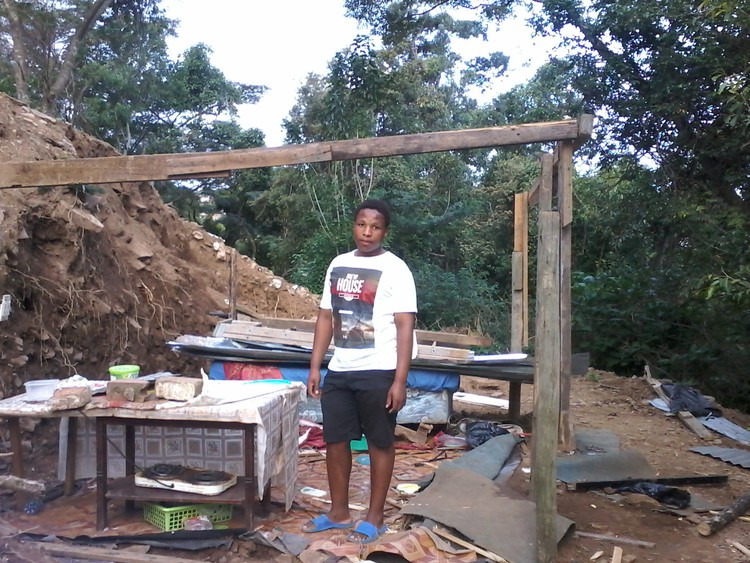 Sakhile Mtambo with what remains of his home in Khenana Informal Settlement in Cato Crest, after it was demolished by City contractors this week. Photo: Nokulunga Majola

Residents of Khenana Informal Settlement in Cato Crest, Durban say their homes are being targeted by the municipality and police.

On Wednesday at least 14 shacks were demolished by Calvin and Family Group, a company contracted by the City with the metro police and members of eThekwini’s Law Enforcement.

Residents say the demolished shacks were among 109 homes that were meant to be protected by a court interdict preventing the eThekwini Municipality from destroying them. Residents say they pleaded with the security personnel to stop but they were ignored.

Khenana has been hit by a number of demolitions in the past year which led the residents to successfully obtain an interdict against the City in February.

“I showed them court papers, telling them they are not supposed to demolish our homes but they continued. They told me they don’t care about the papers and told me to shut up,” said resident Sbongile Thabethe.

On Tuesday, residents said Calvin came to the settlement around 6pm and “started causing trouble”.

It is alleged that they returned two hours later with metro police and accused residents of stealing their gun. “We don’t know anything about a gun. They said their gun went missing earlier and when we questioned them about it, they pointed a gun at me. They were very rude,” Thabethe said.

Residents told GroundUp that when they went to report Tuesday’s encounter at the Cato Manor police station, they were not allowed to open a case against the company.

Resident Landiwe Radebe said she heard loud voices and banging outside her shack. “They were trying to break my door with an axe. When I went out, they told me to get back inside. This is harassment. We didn’t do anything to them,” said Radebe.

Chairperson of the settlement Lindokuhle Mnguni said: “This is unfair treatment from the City. We haven’t done anything and we are here legally. We have every right to the land and even have a court interdict protecting us from demolitions.”

Deputy president of Abahlali baseMjondolo Mqapheli Bonono said: “The City is interfering with the court interdict which protects the people of Khenana. We don’t know what it means when the government says we must stay indoors but the city demolishes people’s houses, forcing them to seek shelter with neighbours and relatives. We are contacting our legal team.”

GroundUp has seen the interdict but it was due to end in March. Zamantungwa Khumalo, Abahlali baseMjondolo’s lawyer explained that it still stands. “The interdict was extended in March 2019 and since then, the City launched another application for eviction. We responded but the matter was never finalised [in court]. The interdict stands but we will have further discussions with the City following yesterday’s demolitions,” Khumalo said.

She said to her knowledge, there were no new structures erected at the settlement and therefore no need for the demolitions.

City spokesperson Msawakhe Mayisela said, “Our responsibility is to prevent land invasion, not to kill land invaders. We are appealing to all formations that claim to be representing land invaders to refrain from fanning disinformation with an intention of tarnishing the image of the City.”

He said meeting the needs of the poor was top of the City’s development agenda. “No amount of lies will distract the City in this regard. Anyone with evidence is at liberty to institute legal action. The City will at all times cooperate with institutions mandated by our Constitution,” said Mayisela.

CORRECTION: This article was withdrawn for a few hours after publication to check the facts surrounding the interdict. We then republished it with a few edits.