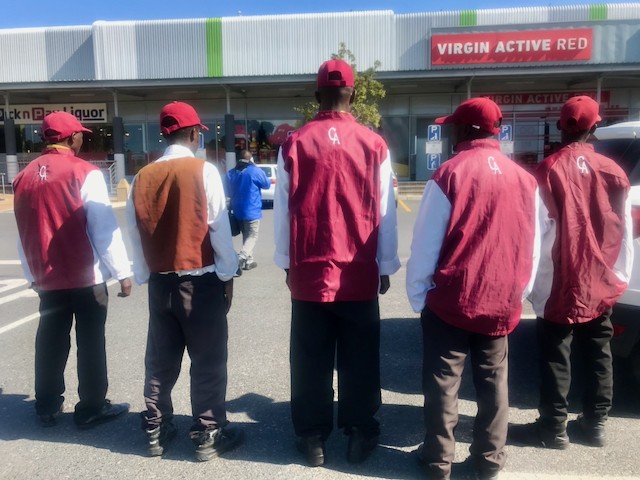 “Car guards” at Brackenfell Centre, Cape Town, say they pay R30 a day out of their tips from shoppers to a company called Customer Assistants. Photos: Tariro Washinyira

At almost every shopping mall and centre there are people assisting customers to push trolleys and packing groceries into the boots of their cars, helping customers with parking and seeing that their vehicles are safe while they shop. They survive on tips given to them by shoppers. At some malls, these “customer assistants” have distinct clothing, which they usually have to buy from the company monitoring them.

The Private Security Industry Regulatory Authority (PSIRA) says only registered security guards may guard cars. “Car guards” have therefore been rebranded as “customer trolley assistants”. For convenience, we will refer to the “customer assistants” as car guards.

Although the business has been around for decades, most shoppers do not know that in many cases the car guards pay for the “privilege” of being allowed to collect tips. And if the tips they collect that day fall below the daily “rent” – about R30 to R50 for a day shift, R15 to R25 for a night shift – they have to pay the shortfall from the next day’s earnings. And in many cases, if they take a day off, they still have to pay the fee. We spoke to guards who say they work from 7am to 7pm.

GroundUp has been told that to secure a spot at some malls, “key money” of between R1,500 and R4,000 has to be paid upfront to a company. The “car guards” we spoke to said they are not registered with the Unemployment Insurance Fund and they have never seen an employment contract. They have no job security and receive no welfare of any kind.

One car guard management company trades as Customer Assistants, which assigns spots and collects the rent from the men. (We found no women in this job.) The sole proprietor is Jon Derek McGowan.

McGowan’s company is the “car guard” agency for a number of malls and centres in the Western Cape, including Brackenfell, Parow and previously Zevenwacht (Blackheath).

When the Covid pandemic struck, McGowan issued letters in April 2020 to the “car guards”, saying they were indeed “staff and key personnel”, and an “essential service” and therefore should be allowed to continue working during level 4 lockdown.

“You are only allowed to work on the site if you have paid your daily deposit of R30,” a car guard at Parow mall told us.

“I must eat little and ensure that by the end of the day, I have the R30 daily deposit. We stand the whole day in the cold, rain and even if we are tired we are supposed to smile, greet and be friendly to customers so that we get something. If you don’t get tips on the day, you inform the supervisor, then the following day, after work, you pay double the amount,” he said.

In 2021, a refugee organisation, Africa Revival (ARF), took McGowan to the Commission for Conciliation, Mediation and Arbitration (CCMA) on behalf of 75 “car guards”, nearly all of them Burundian refugees. They argued that they were being exploited and that they should be treated as employees. Thirteen of them had worked for more than five years, and there were individuals who had worked eight and ten years, according to CCMA papers.

The CCMA case was withdrawn. This was apparently because the guards had no proof on paper that they had been paying McGowan.

Reverien Ngendakumana of ARF said they represented 25 guards from Brackenfell mall, who said they had paid McGowan’s company R30 a day, and 50 guards from Zevenwacht mall. When fees were raised for Zevenwacht, a number of them protested. For this they were dismissed.

The Burundian car guards estimated that they earned R3,000 a month gross, out of which they had to pay the daily fees. This accords with academic research on this.

Research in Durban that profiled ten guards at a free-to-park shopping mall found they earned an average of R108 a day, out of which they paid R35 to the agent, leaving them with R73.

It is not clear what the “car guards” get in return for this daily “bay fee”. Our efforts to get explanations from the agencies managing them as well as shopping mall management have come to nought. But in a 2014 article in Next City an official at one of the agencies is quoted saying that her company ensures the car guards are “easily identifiable, well turned out, well managed and accountable”.

David Esau, Provincial Chief Inspector for the Western Cape Department of Labour, said an investigation is ongoing at all the sites to determine if the “car guards” are deemed employees or volunteers, and if they are employees, what type of contract have they entered into.

The “car guards” at Brackenfell Mall wear waistcoats and jackets with CS emblazoned on them. They say they pay R150 for the waistcoat and R250 for the jacket. One guard, who could not afford the jacket, was working in his shirt sleeves with just the waistcoat.

In email correspondence, McGowan said he runs an “honest, respectful reputable business”. He said, “The business model has been around for more than 25 years. Everyone seems to know and understand how the basic floor plan works, barring those who wish to cause malice, slander and/ or trouble for others who not only enjoy working under an established company such as Customer Assistants, but take exception to those trying to undermine those who run an honest, respectful reputable business”.

He said his staff are happy and well-treated. He also threatened to sue GroundUp for defamation.

He did not respond to our questions seeking clarity on the business model.

Francois van der Merwe, operations manager at Parow Centre, said he could not comment as he doesn’t know what the arrangement is between McGowan and the guards. “Mr McGowan (Customer Assist) is rendering a service to the mall’s customers,” he said.

Acting property manager at Brackenfell Centre Venessa Roux said, “Unfortunately, we cannot share any information with you as it would be a breach of our agreement with the relevant service provider … Notwithstanding the above, we are of the view that these accusations are false and we reserve all our legal rights and remedies should you make any reference to us or the name Brackenfell Centre.”

He explained the current situation at Zevenwacht as follows: “The Customer Trolley Assistants are casual workers who have freely chosen to work at the shopping centre with full disclosure that tips are at the discretion of the customer.

“As a service provider, Nogada [the current company] has to pay the shopping centre a rental on a monthly basis as tenant to render services in the parking areas and Nogada merely provides the Customer Trolley Assistants an opportunity to provide for their families,” said Erasmus. 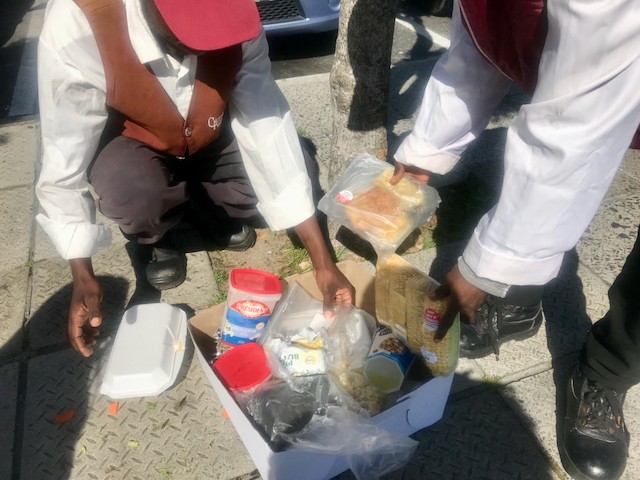 Customer Assistants’ car guards at Brackenfell mall share a box of expired food left for them by a regular customer.