City confirms that Dial-a-Ride is “oversubscribed” 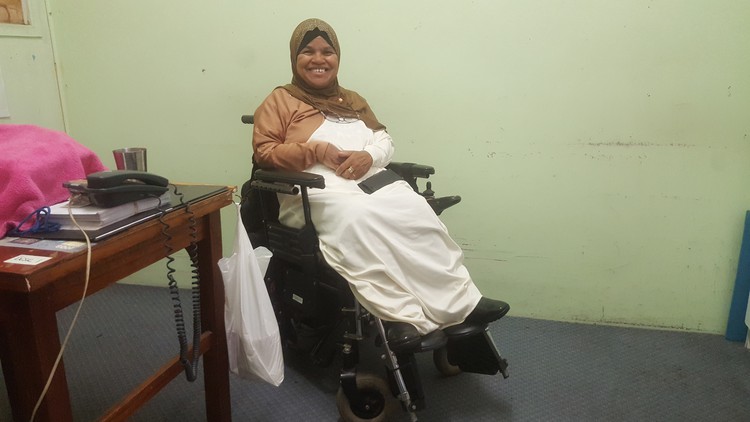 “Dial-a-Ride is supposed to make the journey for people with disabilities easier, but it is not,” says Fatima Martin, who has quadriplegic cerebral palsy.

Martin is disappointed by the City of Cape Town’s transport service for disabled people, Dial-a-Ride. She says it has had problems for years.

Dial-a-Ride buses ran late at the beginning of January because of what the City described as “unexpected delays in the procurement of a long-term, six-year contract”. In 2017, GroundUp reported that Dial-a-Ride users claimed that the service was deteriorating.

“I live in Wynberg and work here in Bridgetown. I pay R22 each way, but as you can see I need assistance, so if I take my husband with me or someone else, I have to pay extra [for this person] even though the person I am with is my ‘hands’. As much as most drivers are nice, they too get tired and some of them work long hours and many times they have attitude towards you,” said Martin.

Martin said she got hurt while travelling on the bus in 2013. The driver had not tied her seatbelt correctly and when the driver suddenly braked while speeding, she flew out of her wheelchair and hurt her leg. She said she was hospitalised for months.

“There is a lot going on with Dial-a-Ride, I have colleagues who are still on a waiting list because the service is always fully booked. Even as a daily user of the service, I have to make sure that I phone and book a week in advance if I want to be picked up,” said Martin.

The City’s Mayoral Committee Member for Transport, Felicity Purchase, confirmed that there was a waiting list. She said the Dial-a-Ride service was currently “oversubscribed”.

Purchase said new applicants for the service have to complete an application form, available on the City’s website. An occupational therapist then assesses the applicant to determine if they are able to use conventional public transport or not.

Dial-a-Ride has 24 vehicles which are retrofitted for wheelchairs. The service covers the entire City of Cape Town municipal area and is integrated with the MyCiTi bus service. Dial-a-Ride has 2,620 users, consisting of 350 regular users and 2,270 ad-hoc users.

A Dial-a-Ride driver, who spoke to GroundUp anonymously, shared Martin’s sentiments. “We work long hours. … I started working for Dial-a-Ride last year in March. I wake up at 3:30am and my first pick-up is around 5:30am. I usually return home around 8 or 9pm. My basic salary is just over R8,000 before deductions and about R7,000 thereafter.”

The drivers are not hired directly by the City, but instead are employed by companies contracted to the City. Purchase told GroundUp that aggrieved drivers need to address their concerns with their bargaining council.