Cape Town’s hostels to be upgraded

Built to accommodate black working men under apartheid, many are in terrible condition 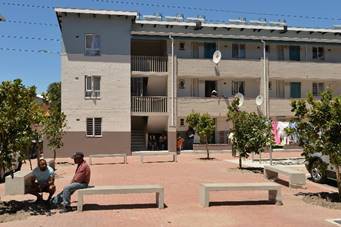 Upgrading of hostels in Langa, Nyanga and Gugulethu is likely to start next year, the City of Cape Town announced on Thursday.

GroundUp reported earlier this month that residents, who have been living for decades in hostels in Langa, say there have been no improvements to them. We described their terrible living conditions.

According to Mayco Member for Human Settlements Malusi Booi: “Under the apartheid regime, the hostels in Langa, were built for black African men who were employed as labourers for various companies within the larger cities of South Africa. During this period, it was a prerequisite of employment for companies to provide hostel accommodation for their labourers.”

Over the decades women and families have moved into the hostels, but the condition of the apartments has deteriorated.

There are currently about 11,000 hostel beds in Gugulethu, Langa, Nyanga, Lwandle and Mfuleni. According to the City, the worst-affected ones are in Langa.

A statement published by the City on Thursday said that in 2010 a survey had been done to assess all the hostels in Cape Town. The hostels were then ranked by their condition.

The City said that about R250 million had been spent on the programme so far and 463 new apartments had been built.

In the next phase of the hostel transformation programme, set to start next year, about 660 new apartments will be built in two sites in Langa. This is estimated to cost R320 million.

Booi said the majority of the hostels are in Langa. He said the City is putting in place a “panel of consultants” by August. “This panel will look at Nyanga, Langa, Gugulethu Section 2 and Gugulethu Section 3 and develop a holistic plan for all of these areas,” said Booi. “We are going to need all affected parties and stakeholders to work with us and to act in a manner that is to the benefit of as many beneficiaries as possible.”