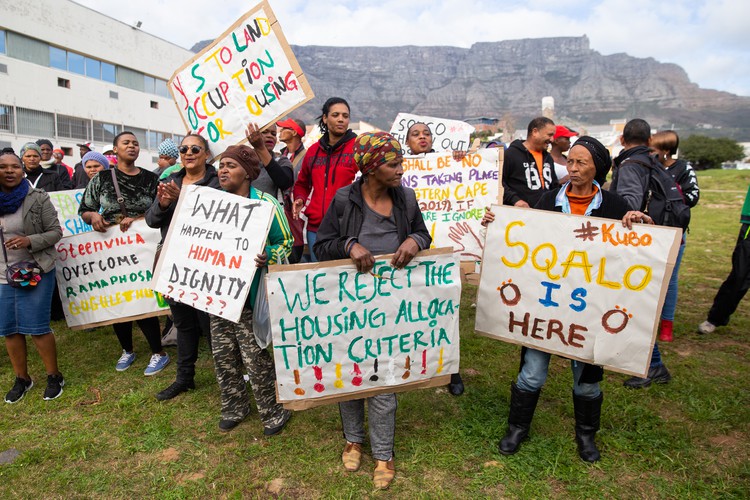 Demonstrators from Bishop Lavis, Blikkiesdorp, Gugulethu, Siqalo, Steenvilla and other areas in Cape Town gathered at Keizersgracht Street to march to the mayor’s office to demand housing and an end to evictions. Photo: Ashraf Hendricks

Jo-Ann Cupido grew up homeless in Cape Town and has been living on the streets for over 40 years. In this time, Cupido has been harassed and locked up numerous times under City by-laws.

On Wednesday, Cupido was among the 200 people who marched from Keizersgracht Street to the Civic Centre demanding decent housing for all and an end to evictions. Demonstrators came from Bishop Lavis, Blikkiesdorp, Gugulethu, Siqalo, Steenvilla and other areas.

Ebrahim Fourie of the Housing Assembly, a social movement focused on housing inequality, said that evictions were taking place all over Cape Town. “We consider it illegal,” he said. “We want the government to deliver housing.”

Cupido said that in 2010 she and many others were forcefully moved to Blikkiesdorp, the City’s temporary relocation housing area, in an attempt to “clean up” the city for the FIFA World Cup. Years later, she still lives over 25km away from the inner city. She is unemployed and has four children.

Also at the march was Jennifer Pasqualille. She and her family were evicted from her council home that they had lived in for more than ten years in Bishop Lavis a few weeks ago. At the time of the eviction, Pasqualille wasn’t home. When she returned, all her belongings were removed and R2,000 had gone missing. She was told by authorities that she had been living in the house “illegally”. She says she has been on the housing list for 19 years.

Outside the Civic Centre, some demonstrators were unhappy that Mayor Patricia de Lille sent “junior officials” to meet them. A memorandum was signed by Phumlani Godlo and Anvor Clayton of the mayor’s office. Demonstrators have given the City seven days to respond.