“When we arrived there, the fire was going crazy” 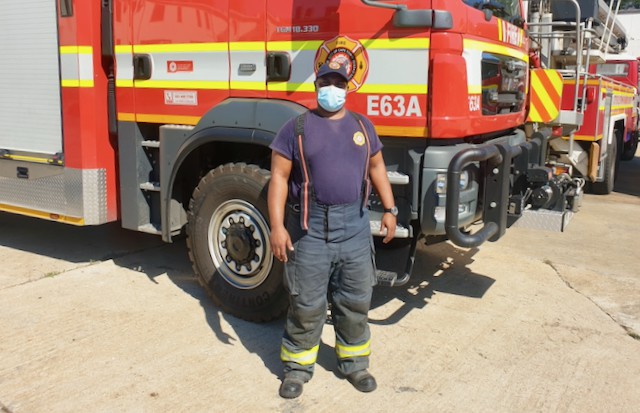 Nathan Phillips from Epping has been a firefighter for 13 years and helped fight the blaze that hit Cape Town earlier this week. Photo: Mary-Anne Gontsana

Firefighter Nathan Phillips was at work, stationed in Epping when the call came in on Sunday to fight the fire in Cape Town.

“I was on a shift on Sunday and I could see the smoke coming from the mountain. Immediately, I prepared myself mentally because I knew for a fact that is where we were going to end up, on the mountain,” said Phillips.

“The scene was devastating. We were dispatched to the offices of a University of Cape Town residence on Sunday. When we arrived there, the fire was going crazy; it was spreading rapidly.”

Phillips said they went inside the flaming building, hoses in hand and dressed in protective gear.

“I cannot exactly say how long it took to put the fire out because I don’t keep track of the time, but it was a while,” he said.

Phillips has been a firefighter for 13 years. But the job never gets easy, he says.

With a four-month old baby at home, there is always anxiety and worry, for him and his family, when he heads out to help extinguish veld fires.

“I have always wanted to be a firefighter since I was young and it also played to my love of helping people who are in need. I come from a gangster and drug-ridden area in Epping, and I had always believed that one day I would help my community in some way or another.”

The fire on Table Mountain on Sunday spread to the University of Cape Town, threatened neighbourhoods, destroyed buildings and monuments, and burnt over Devil’s Peak.

Employed by the City of Cape Town and working 24-hour shifts, Phillips works from 9am to 9am. Firefighters are rotated during the 24 hours and get time to rest while another group of firefighters is dispatched.

The different ranks of firefighters have different pay scales and their basic rates, excluding benefits and allowances, range between R52.28 and R152.96 an hour, depending on rank and seniority.

“During the week they have two days off. Weekends, they have 24 hours off after every shift, which allows each platoon to have a four day, Monday to Friday, long weekend every three weeks,” said Tyhalibongo.

Another programme in the frontline is Working on Fire (WOF). WOF’s Limakatso Khalianyane said its firefighters were employed in terms of the Expanded Public Works Programme and their stipends were determined annually by the Minister of Labour.

“We recruit young people from disadvantaged areas and train them as veld and forest firefighters. We give them more skills so they are employable in the formal sector.”

“We have a little less than 750 firefighters in the province,” said Khalianyane.