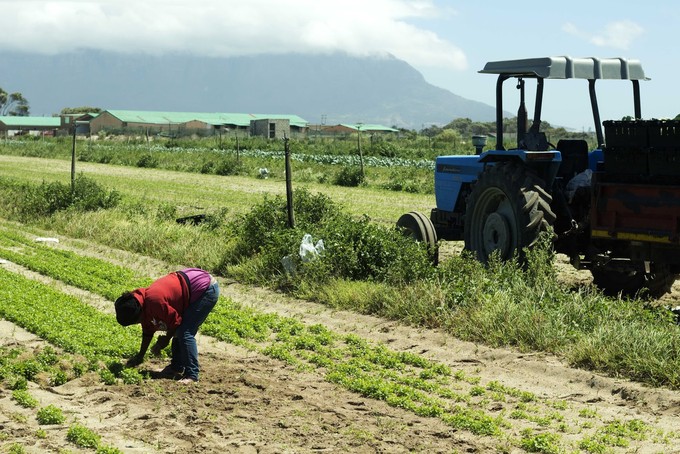 The Philippi Horticulture Area has been proposed for urban development but farmers and activists say this is a very bad idea for food security and water resources. Photo: Masixole Feni

Although right on their doorstep, many Capetonians are quite unaware of the great bounty they enjoy from the vast, flat plains of the Philippi area. A cornucopia of table vegetables are grown here. Winter rains turn part of the area into a wetland, a little known paradise for flamingos and other water-loving birds.

But this farmland in the Philippi Horticulture Area (PHA) is threatened by two proposed property developments. The ongoing saga has left farmers and activists fuming and accusing the City of Cape Town of having a sham public participation process. The City says no decisions have been taken yet on the applications received for development of the area.

Convener of the campaign to preserve the PHA, Nazeer Sonday, who has been actively campaigning against the property development for years, said, “We know that if the City approves these developments, it is going to have a huge impact on the City, not only in terms of food, but also in terms of water. It is going to destroy the aquifer and it will destroy the City’s ability to feed its population.

“We are so gatvol of the public participation process, because it seems like it’s just a matter of the government saying they will do something and by law they have to ask you for your input. You give the input and they say thank you very much and go ahead and do what they want anyway.”

The Philippi Horticulture Area Food and Farming Campaign applauded the Heritage Western Cape committee decision taken on Tuesday (in a seven to three vote) not to approve the rezone application for the U-Vest development in the south of the PHA.

However, spokesperson for Bredell, James-Brent Styan, said the City was a separate sphere of government that exercised control over all municipal planning matters in terms of the constitution and was still free to approve the rezoning.

“The City could approve this rezoning application by MSP even after the minister had previously refused the land use application,” said Styan.

The decision by Western Cape Heritage is also not binding on the City.

Facts about the Philippi Horticulture Area

Councillor Johan van der Merwe, the City’s Mayoral Committee Member for Energy, Environmental and Spatial Planning, said the City did take into account public input and did consider comments made. Currently, two applications for development had been received, but no decision taken.

He said the impact on the aquifer and food security were issues “typically considered as part of an Environment Impact Assessment (EIA)”.

According to Sonday, there are two developments planned on the PHA: Oakland City and U-Vest.

“Developers are proposing 20,000 houses, creating about 2,000 jobs. And those jobs will last for about five years. What must happen after?”

Van der Merwe said that last year the City had “received a development application for rezoning of a portion of this land, about roughly a third [of the PHA], for residential purposes. This application is yet to be decided.”

He said the “City is not working with a developer, but rather at this stage fulfilling its constitutional mandate as an impartial development regulator”.

Sonday said, “We have seen academics, we have spoken to local farmers, we have our own opinion because we live in the area, and we have spoken to food security experts and we put out 42 pages of comment, 17 appendices to support our argument. We are asking the City why they want to rezone the area for housing. And they tell us that it is for the people living in shacks in Philippi who need housing, but actually it’s not for them, it’s middle class housing which you have to get a bond on.

“So they fool people and paint the picture that housing is needed. So we are saying that they don’t have to rezone the area to apply housing. We can develop our own housing model here without rezoning the area. One of those models is an agri village, which is a national government policy. We’re trying to explore that but we are not making any headway, because the City wants to develop this area. So all our suggestions, they don’t even listen.”

Cabbages, carrots, spinach, cauliflower and coriander are some of the produce supplied to the big supermarkets by the PHA. According to the farmers, PHA supplies 150 000 tonnes of the vegetables consumed in Cape Town. The PHA farmlands and seasonal wetlands are a valuable resource and are crucial for recharging the Cape Flats Aquifer. Sonday said building over the aquifer would ultimately dry it up.

CORRECTION: This article originally said PHA supplies 50% of vegetables consumed in Cape Town; it has been corrected to 150,000 tonnes.