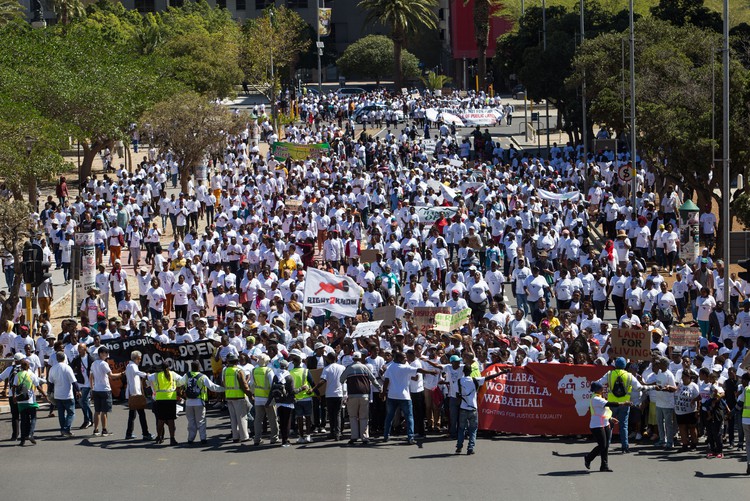 Thousands of people marched through Cape Town from Keizersgracht Street to the Civic Centre on Wednesday, Human Rights Day. They handed a memorandum to government representatives demanding land for people to live on.

The march was organised by the Social Justice Coalition (SJC), District 6 Working Committee, Ndifuna Ukwazi and Reclaim the City. It was attended by people from across the city, the majority of them people living in informal settlements or renting backyard shacks. Residents of Marikana, Khayelitsha, Gugulethu, Kraaifontein, Masiphumelele and Manenberg were there.

The protesters want land where they can build, in Notywala’s words “dignified homes that people currently do not have.” While much of the South African land debate has focussed on rural areas, for the past decade the SJC, and then Reclaim the City have been campaigning for urban land for better housing in Cape Town itself. Reclaim the City is pushing for affordable housing to be made available in or near the city centre, while the SJC has been campaigning for improved conditions in informal settlements, especially better sanitation.

Wednesday’s march follows an increase in occupations on private and municipal land across Cape Town. (GroundUp has sought statistics from the City but not yet received any.) The City has condemned these occupations, which it calls “invasions”. In a statement on Monday, it said: “When land is invaded, it jeopardises emergency and basic service delivery; it stretches our resources; and it prevents progressive integrated development to manage rapid urbanisation.”

The statement further said: “The City will not be held to ransom by those instigating land grabs and the associated violence and destruction that often go with it.”

“While we wait for houses let us wait in dignity. At least give us toilets, give us water and electricity. Let us live like people. We are not dogs,” said Cogill.

For 60-year-old Nomathamsanqa Mafanya the thought of a decent place to stay brings tears to her eyes. She is a backyarder in Kraaifontein and stays with her grandchild. Their only source of income is a social grant. “Close to R700 goes to rent and electricity for a one room shack at the back of someone’s house,” she said. “We are moving from house to house where people are treating us badly because they know we are desperate for places to stay.”

She has been a backyarder for over 20 years.

Wolverivier resident Mzwandile Mgudlwa spoke about the living conditions in the area and the difficulty of accessing basic services. “They put us in an area you can’t even find on a map. We are deep in bushes,” said Makeleni. “People struggle to even access social grants. People have to pay huge amounts of money just to go get the social grant that is already too small.”

Wolwerivier is a temporary relocation area north of the city. Activists have criticised the City for placing people who have been evicted there because it is far from jobs and services.

The memo called for the City to fast track the process of buying or expropriating land in Marikana, Philippi, as directed recently by a court, as well as to expropriate private land where informal settlements have been set up. The memo also called for the City to commit to a plan to upgrade informal settlements, and for the Western Cape government to stop the Tafelberg development in Sea Point and to properly fund the Rental Housing Tribunal.

The memo also called on the national government to fast track the restitution processes for District Six claimants and commit to a land audit of District Six.

Mayoral Committee Member for Transport and Urban Development Brett Herron accepted the memo on behalf of the City. “It is true that today is Human rights day and so we can maybe celebrate that all of those laws of apartheid that separated us are gone. But it is also true that the laws may be be gone but apartheid still exists in our spatial plan in Cape Town and in other cities,” he said. “I have made a commitment on behalf of this government that we will do everything we can to address that imbalance and spatial segregation.”

He said municipality-owned land had been identified in the inner city that should be used for housing poor people.

Representatives from Premier Helen Zille’s office as well as the Department of Rural Development and Land Reform signed the memorandum.

The organisers gave the relevant departments 21 days to respond to the memo.

This article has been updated. The previous version incorrectly attributed the quote of Wolwerivier community leader Mzwandile Mgudlwa to Joseph Makeleni.