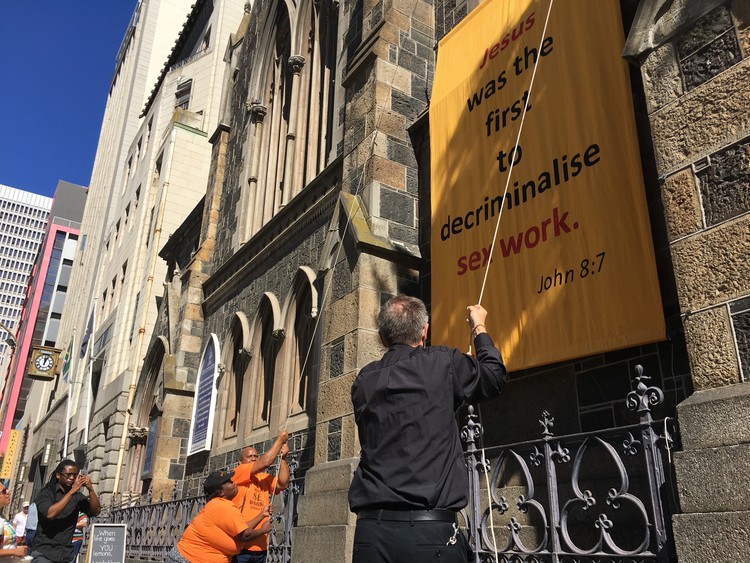 Reverend Alan Storey and members of Asijiki hoist a banner saying “Jesus was the first to decriminalise sex work” on the Central Methodist Church in Greenmarket Square. Photo: Aidan Jones

Reverend Alan Storey of the Central Methodist Mission, together with members of the Asijiki Coalition for the Decriminalisation of Sex Work, on Thursday hoisted a banner over the church steeple in support of the decriminalisation of sex work.

The banner, which read “Jesus was the first to decriminalise sex work”, is part of the church’s Yellow Banner Theology.

According to the Sex Workers Education and Advocacy Taskforce (SWEAT), this is the first time a South African religious institution has made a public statement in support of the decriminalisation of sex work in South Africa.

“What the criminalisation of sex work has done is make a vulnerable group of people even more vulnerable,” said Storey. “The unintended consequences of criminalising sex work are horrific.”

He explained that the criminalisation of sex work disempowers sex workers from insisting on safe sex practices with clients. “This makes sex workers more vulnerable to sexually transmitted diseases.”

Storey said that it also adds to the social stigma and “almost validates their social outcast status”. He said this can make it difficult for sex workers to access health services and law enforcement.

“Speaking on behalf of all sex workers in South Africa, we are so happy that we have pastors who recognise sex workers as human beings,” said Pamela Chakuvinga, assistant national coordinator at national sex workers’ movement Sisonke.

Chakuvinga said that there are religious leaders in Cape Town who think it is evil to do sex work. “They say that sex work is something demonic … They pray for sex workers to leave sex work.”

Constance Nothando Mathe, co-ordinator at Asijiki said: “I would like to emphasise to those pastors that it is not their duty to judge. Only God can do that. They are there to preach the word of God.”

“The church is a non-judgemental space, so people should not judge sex workers,” said Mathe.

Storey admitted that “very often it is the religious community more than any other community, and specifically the Christian church, that promotes criminalisation [of sex work].”

As a result of the resolution, Parliament’s multi-party women’s caucus will host a summit on sex work on 5 March 2018. At the summit, recommendations in the South African Labour Reform Commission’s (SALRC) report on “Adult Prostitution” will be debated.

Asijiki has put together a summary of this report, which is available here.