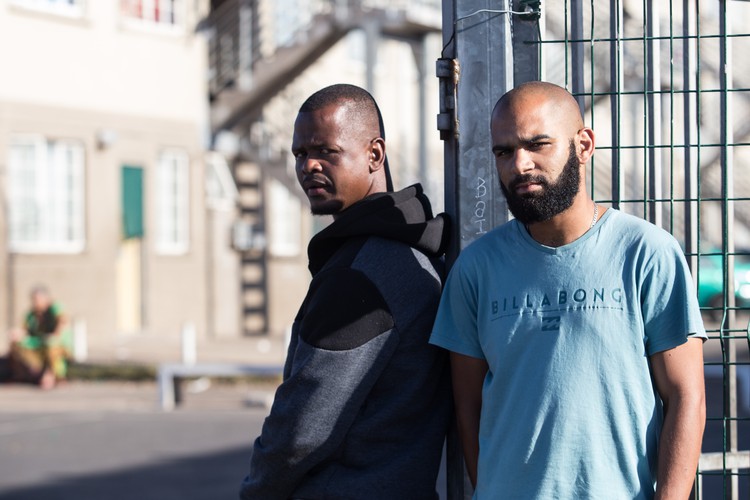 Gordon De Bruin (left) and Urswin Engel are the lead actors in the play Don’t Miss Your Turning Point, which will be staged for the first time at the Artscape Theatre Centre. Photos: Ashraf Hendricks

Gunshots often ring out from Lansur Road, one of the more dangerous streets in Hanover Park on the Cape Flats. It is the border between two rival gangs – the Ghetto Kids and the Americans. Yet in a church hall on the street, singing can be heard – a quartet of girls performing a version of It’s a hard knock life from the musical Annie. A group of determined youngsters and adults are in the final rehearsals for a play, Don’t Miss Your Turning Point, which will be staged at the Artscape Theatre on Saturday.

It is rare that children from Hanover Park get to put on at the Artscape Theatre Centre, said Tammy Matthews, the director of the show and one of its scriptwriters. Some of the kids hadn’t even heard of Artscape.

Matthews is also the choreographer for the show and gives free acting and dance classes. “If they could pay, they would probably be at a ballet school or a drama academy,” she said.

Matthews believes such opportunities can create positive change in the community. She said children as young as ten are sniffing glue. “If there isn’t something for them to do, then they’re going to do what everyone else is doing,” said Matthews.

The show incorporates song, urban dance and ballet with 50 performers, aged between four and 35. The play has a sustaining religious theme, but it also touches on romance, family dynamics, domestic abuse and gangsterism.

Some of the cast hail from Hanover Park, Delft and Mitchells Plain; some are ex-gangsters, some youth at risk. None have formal training in the arts.

Many of the performers have gone through programs at the First Community Resource Centre (FCRC), an organisation that deals with counselling, substance abuse rehabilitation, gangster reform and abused and neglected children. The FCRC is producing the show. Last year, it produced Not Another Cinderella Story, which was also performed at Artscape. 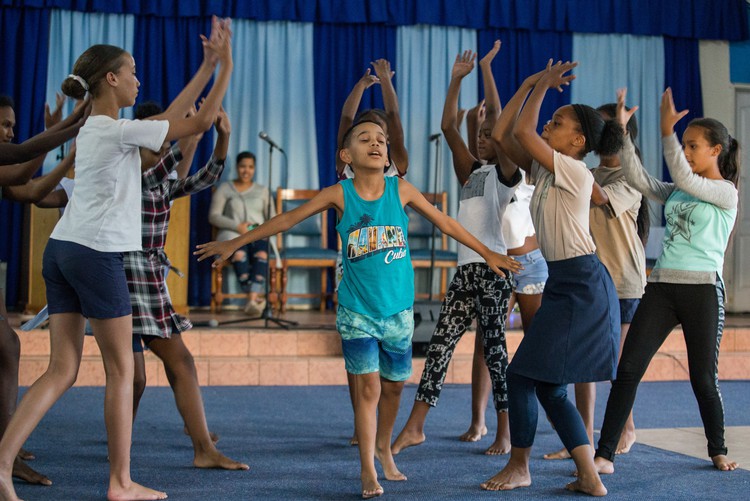 Performers rehearse at the Pentecostal Protestant Church in Hanover Park.

Based on true events, the story follows the life of two gangster brothers, Wesley and Quinton. Whereas Wesley reforms and chooses a religious life, Quinton finds himself stuck in the world of drugs and gangs. The play revolves around Quinton trying to convince his brother to change.

One of the stars of the production is Gordon De Bruin, who plays Wesley. He grew up in Hanover Park and Ottery. His father, siblings and extended family were all involved in gangs and dealing drugs.

“I was born in it, because It runs in my family,” he said. When De Bruin was 16, he was sentenced to ten years in prison for murder. He was in grade 10 and finished matric in prison. For years after his release, he still found himself in and out of prison.

Eventually, as gang life took its toll, he joined the CeaseFire program at the FCRC. It completely changed his life. “I started to see things that I’d never seen in my life before,” he said.

This was De Bruin’s turning point and he feels the show reflects his own life.

Urswin Engel, who plays Quinton, is also coordinator of the CeaseFire program. He said many children grow up without leaving the boundaries of their gang territories, whatever their suburb. When they become gangsters, “then they go only to the other territories to fight”, he said.

Once you take them out of the area and show them what else is out there “there whole mindset about life changes”, he said.

The chance to perform at Artscape therefore presents a unique opportunity. They will go back to their normal schools, but they will share their experiences and pictures and inspire others.

Engel said that the norm in Hanover Park is to run towards gunfire. The children are “running to go see the body that has been shot”.

As a young child, Engel dreamt of becoming an actor, but growing up in Athlone, that dream faded. Schools didn’t offer drama.

Jonathan Dial, chairperson of the FCRC, said that for many in the cast the story is true to life and they are portraying the things they’ve gone through.

He hopes the show will also help raise funds for FCRC programmes. The recovery programme in Strandfontein can cost between R1,800 and R2,500 per person and people enrolled in it live for four to six weeks on the premises.

A major challenge for the organisation is that so many people need help, but the programme can only support a limited number.

What cannot be shown on stage is explained by the “gossip girls” – two women who help inform the crowd of things in the neighborhood. One of the gossip girls is played by Delcarmi Domingos.

Due to substance abuse, she lost her home and family. Things became so bad at home that her husband eventually left for Angola with two of her children. This was a wake-up call for Domingos. She booked herself into rehab and through a number of jobs and volunteering she managed to save the money to get herself to Angola. She reunited with her husband and children in 2017.

Domingos said the first time she saw the show was when she was in the rehab program. It gave her hope. “From the streets, to Hanover Park, to the Artscape,” she said smiling.

“Don’t Miss Your Turning Point” was first performed in 2013 at Joseph Stone Auditorium in Athlone. This will be the first time it will be performed at the Artscape Theatre.