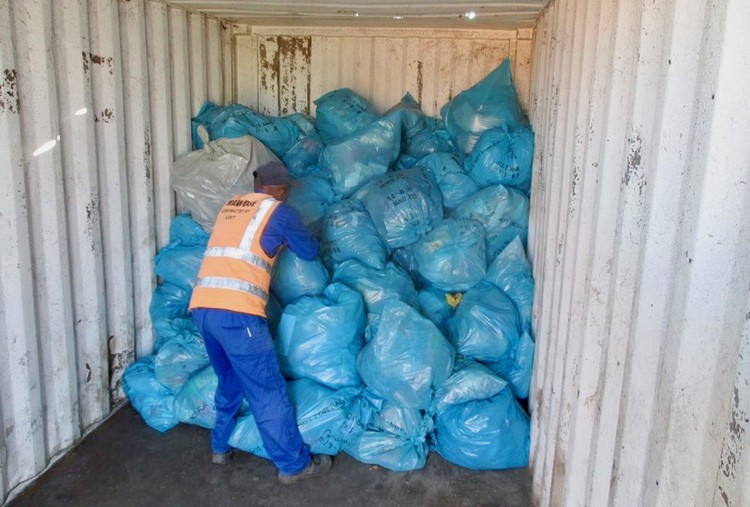 A cleaner packs rubbish bags in a container for collection. Photo: Mandla Mnyakama

Community street cleaners in informal settlements in Gugulethu and Nyanga complain that they are working without all the necessary protective gear, in particular face masks. They also say they want the same vaccinations given to janitors. They say they are afraid to complain to their bosses for fear of losing their jobs.

The group, mostly women, work for Mawose Cleansing Services, contracted by the City of Cape Town. There are 16 cleaners at Europe, ten in Barcelona, nine in Borcherds Quarry, six in Lusaka, seven in Klipfontein Road, and six in Vukuzenzele informal settlement. Cleaners from Mpetha Square informal settlement echoed their sentiments.

The cleaners collect refuse bags from shacks, general litter and garbage dumped at informal dumping sites, and drop it off at containers for collection.

They say they are often confronted with unbearable smells from disposal nappies, dead cats and dogs, rotten food, and animal skins, skulls and bones. Sometimes, they have to deal with raw sewage as some residents empty out their portable toilets at the dumps.

Patrick Silo of Mawose said, “We usually do not just give out facial masks to our cleaners for any situation, but provide them with it only when they deal with serious filth in squalid conditions.”

He said, “We fear that they might lose them easily. They have done so in the past … Whatever they told you is all lies.”

The cleaners however said none of them had ever been provided with masks. Some said they had decided to buy their own masks or relatives bought masks for them. They said their managers told them to wait ten minutes after opening the collection containers before entering to let the stench clear.

A mother of two from Europe Squatter Camp, who did not want to be named, said she wanted government to help them “because it obvious that our bosses are not willing to do so. It has been four months now since we started this work.”

Ntombizine Sobethwa, a mother of five from Vukuzenzele, said she bought her own facial masks – five since January.

She also believed in the milk myth. “No one had assured us that milk was good to protect us from what we do. We just drink it because other people advised us to do so in order to be safe from the choking stench we usually inhaled. However, the expense of the milk becomes too much, and it becomes impossible to afford regularly,” said Sobethwa.

A worker from Lusaka said she has spent R450 on a course of three Hepatitis B vaccinations since July 2016, when she started the job.

“But raising the matter with our management becomes too risky,” said a worker. “We fear that they will label us as a problematic (person), and then replace us with a new recruit.”

On Monday, GroundUp came across Elzett Mankayi, 57, trying to clean up a mound of human faeces dumped at a Barcelona refuse collection point. She had no facial mask and was struggling to cope.

Councillor Xanthea Limberg, the City of Cape Town Mayoral Committee Member for Informal Settlements, Water and Waste Services, said all contractors are expected to comply with the Occupational Health and Safety Act by providing protective clothing to all workers.

“This particular legal requirement carried a R1,000 penalty per occurrence … Each contractor is expected to comply with the conditions of the contract. We will liaise with the contractor in question to ensure that all health and safety requirements are met. If any aspects of the tender have not been fulfilled, action will be taken,” said Limberg.

Silo admitted, “It’s true, that you definitely have to wear a mask when you enter such [collection] containers, because that place stinks too much.”

“I am also thankful to you [GroundUp] for highlighting this issue, so that from now onwards I can buy all the relevant equipment and keep it ready for them,” he said.

Silo said the issue of vaccination of the cleaners had been raised with the City of Cape Town, but they informed him that their own research had shown them that it was unnecessary.