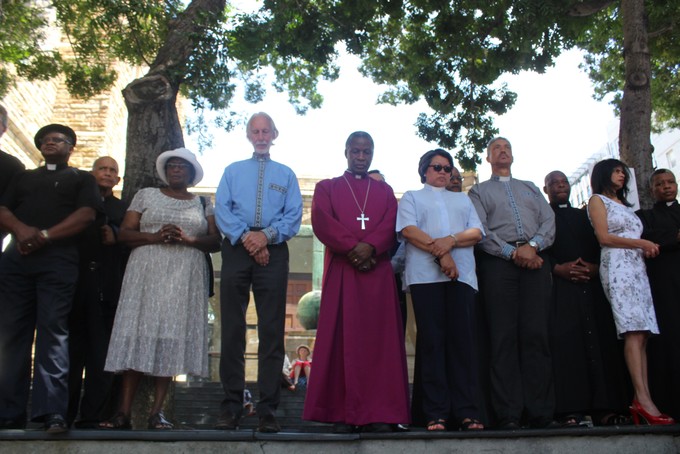 Over 200 people marched earlier today in Cape Town from St George’s Cathedral to the National Prosecuting Authority. Organised by the South Africa First Forum (SAFF), the protesters delivered a memorandum calling for the end to state capture and corruption in state institutions.

Most of the protesters wore white or apparel with the South African flag, and many carried signs that read “Defend our Constitution!”, “Stop State Capture,” and “Restore Rule of Law”.

Protester Nicoli Cloete said: “I think the main message is that too often people, citizens of South Africa… are sitting at home, and they’re unhappy with the status quo, they’re unhappy with the way the government is running things, how our current president seems to be taking advantage of that which is public. It’s about… bringing it out into the street and making people aware that yes, there is this unhappiness.”

“It’s about how our frustration has grown and grown. We’ve almost become the laughing stock of ourselves.”

A co-founder of SAFF, Crispin Sonn, addressed the crowd on the steps of the cathedral and urged them to consider the type of South Africa they want to live in. “We hope this is the beginning of our actions to bring about the society we’ve always dreamed about,” he said.

“Zuma is a speedbump. He will go, but when he’s gone, what will we have?” Sonn asked.

The march in Cape Town is one of a number of demonstrations happening across the country today against state capture.

Chanting “Enough is enough!”, the group, escorted by police, marched from the cathedral up Wale Street to Bree Street and finally to Leeuwen Street to the office of the NPA. The protesters called for the ousting of President Zuma and National Director of Public Prosecutions Shaun Abrahams.

When they arrived at the NPA, the protesters chanted for Rodney de Kock, director of public prosecutions in the Western Cape. He came out to greet the group and to receive the memorandum, read by Rod Solomons, an advocate for SAFF.

“Ordinary South Africans will no longer tolerate the abuse of organs of state, Chapter 9 institutions, and state-owned enterprises,” Solomons read from the memorandum. “The message is clear and unequivocal. Enough is enough.”

The crowd cheered when Crispin said that President Zuma had withdrawn his application to interdict the Public Protector’s report on state capture this morning. The Pretoria High Court has ordered the report to be released at 5pm today.

Speaking to the protesters from the entrance to the NPA, Crispin expressed hope for the future of the movement, emphasizing that a reform of government could happen with enough action.

“We are not marching against the NPA. We are marching for it!” he said. “We need it to work.”