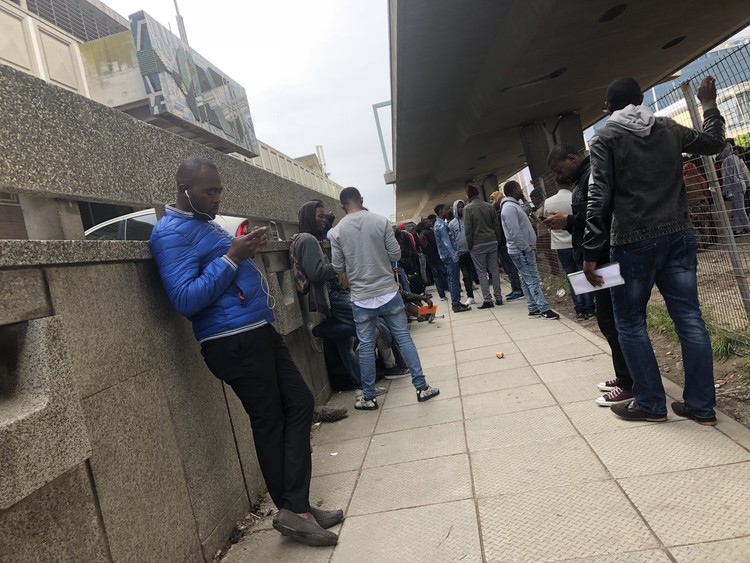 Queues at the Department of Home Affairs on the Foreshore. A new refugee office is to be opened in Maitland. Archive photo: Tariro Washinyira

A Cameroonian family seeking asylum, who arrived in South Africa on 3 April by entering through Lesotho, are struggling to legalise their status. The three brothers, together with two women and five children, say they fled their country because they were caught in the conflict between the English and French-speaking population, which erupted in 2017. The family wishes to remain anonymous and say they fear for their lives.

The family went to immigrant-rights activist group PASSOP. Like many asylum seekers they are battling to get documented in Cape Town because Home Affairs closed its doors in 2012 to new applicants.

The Legal Resources Centre (LRC) and the Scalabrini Centre took Home Affairs to court and, after a long battle in September 2017, the Supreme Court of Appeal ordered the department to open and maintain the Cape Town office by 31 March 2018. But Home Affairs has still not complied, though it has been reported that a new Cape Town Refugee Reception Office will be opened in June 2019 on new premises in Maitland.

Currently, there are only four centres – in Musina, Pretoria, Durban and Port Elizabeth – where new asylum applications can be lodged.

“We are relying on someone we grew up with in Cameroon [but is now in Cape Town]. She is not a blood sister; it would be too much to ask her to finance the trip to PE, including food and accommodation,” said the eldest brother.

“Even if they manage to raise the money to go and apply outside Cape Town, renewing is also going to be a problem, as the family will need to travel to renew at where they have originally applied,” said Tendai Bhiza of PASSOP. “We have a case of a woman who has travelled from Pretoria to renew here in Cape Town because Home Affairs is refusing to transfer her file.”

Life has been a daily struggle for the family from Cameroon since they arrived in South Africa. The ten-year-old girl had already missed a year of school and is still not in school.

“Every school I have been to here in Cape Town is asking for either a study permit or asylum document in the child’s name,” said the eldest brother.

“Life is expensive in Cape Town. I have a big family. I need to stand on my feet and give my sister and her family space but I don’t know how without a document,” he said.

He is however grateful that his family is out of danger, but he is worried about what the future holds. Without documents, he cannot open a bank account. He will struggle to find work or start a business. The family will struggle to get medical care and schooling. And every day, he lives in fear of being arrested.