Call for more churches to become places of refuge 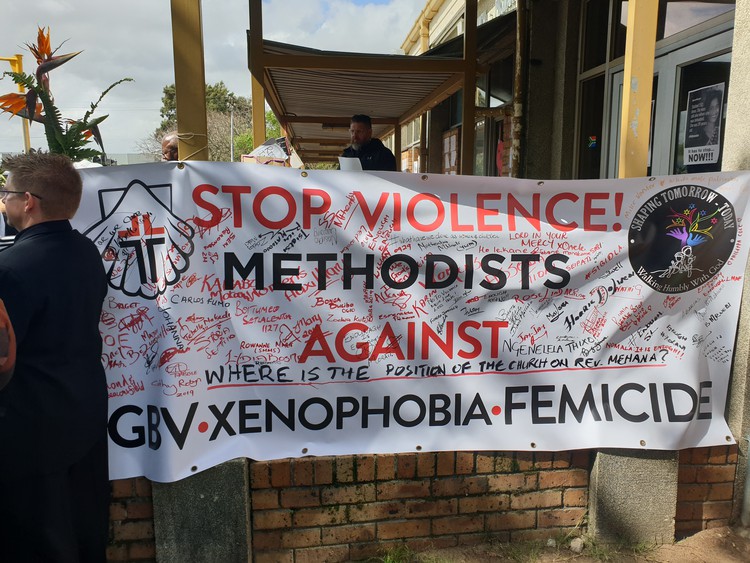 About a hundred people gathered outside the post office in Claremont on Thursday for a silent protest against gender based violence. Photo: Mary-Anne Gontsana

By Mary-Anne Gontsana and Drew Wayland

About a hundred people gathered at the Rosebank Methodist Church and outside the post office in Claremont on Thursday for a silent protest. The event, organised by church members, saw ministers and deacons from across Southern Africa speak out against cases of violence against women and children.

Picketers were dressed in black to mourn the death of UCT student Uyinene Mrwetyana who was murdered at the post office three weeks ago. Her death sent shock waves throughout the country, leading to mass protests and marches, calling for an end to gender based violence. The post office building remains closed and is decorated with flowers, posters and memorial tributes to Mrwetyana’s life.

Holding up placards which read “Disrupt rape culture”, “No means no” and “Women are not toys”, picketers sang hymns and read bible scriptures, making special references to violence against women.

Faith leaders led the crowd in prayer, then gave the community members an opportunity to voice their commitments to changing the “scourge” of violence. One woman, a marriage official, promised that she would never marry another couple that showed signs of being abusive.

Deacon Douw Grobler from Pretoria, who is in Cape Town for an annual Methodist conference, said: “Looking at what is happening in society at the moment, what the flashpoints are, what the issues are, it is obvious that gender based violence is very high.”

“For that reason we met last week as a connectional executive and we decided that we need to roll out initiatives to bring about action,” he said.

Grobler said more involvement from local churches to care for victims of gender based violence was needed. “Like facilitating counselling and partnering with them as they go to police stations and trauma centres. Just be a place of refuge for them,” he said.