Grisly find on way to school 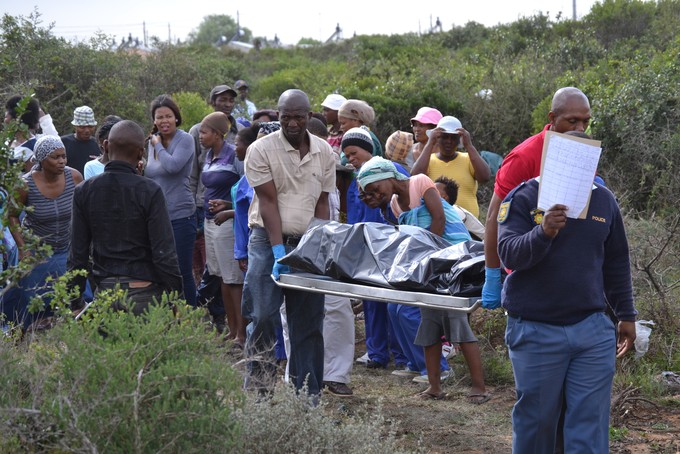 The body of one of the men suspect of stabbing Aseza Tofu to death is carried away. Photo: Joseph Chirume

The badly burned bodies of two men were found early today in Motherwell in Port Elizabeth. Residents say the dead men were suspected of stabbing to death 27-year-old Aseza Tofu at the weekend.

The bodies were discovered by a resident of Ramaphosa township in Motherwell. He was taking his child to creche at around 7.30 am on Tuesday.

“I went to the bushes to relieve myself.I was shocked to see two human bodies with their hands tied to their backs. The bodies were lying one on top of the other. I quickly reported the horrible discovery to police,” said the resident, who did not want to be named.

Tofu, who rented a room in Ramaphosa, had asked some men who were partying in the house to lower the volume so he could sleep.

Sesethu Mkonko, 24, his girlfriend of five years, said: “Aseza needed to sleep during the day as he was working night shift as a petrol attendant. He asked the partying men to lower the volume of their radio but they refused and told him to shut up as it was their parents’ house. An argument ensued and one of them stabbed him in the chest.”

She said a community member had carried Aseza to his car to take him to hospital but he had died on the way.

Two of the men among those partying had been arrested and are in custody. But three others escaped, residents said. The two dead men are thought to be among them.

“I am happy that the people who killed Aseza have also been killed. What they did on Sunday was barbaric. How can you stab somebody because he politely asked you to lower down the volume of your radio? They should have discussed it in a polite manner, not open a knife and kill him,” he said.

Another resident who did not want her name mentioned, agreed. “We are tired of these criminals. They smoke dagga and other drugs openly. The police defend them. I am pleased by this quick justice. It also serves as a warning to other criminals.”

Tofu’s murder sparked a protest on Sunday by residents who wanted the police to release the two suspects to the community. The residents wanted to mete out their own justice.

Police spokesperson Constable Mncedi Mbombo said: “A murder docket has been opened.The motive of the murder is not yet known and no arrests have been made yet. The deceased are aged between 25 and 30 years.”