Residents say they occupied the poorly built, incomplete houses after they had stood empty for six months 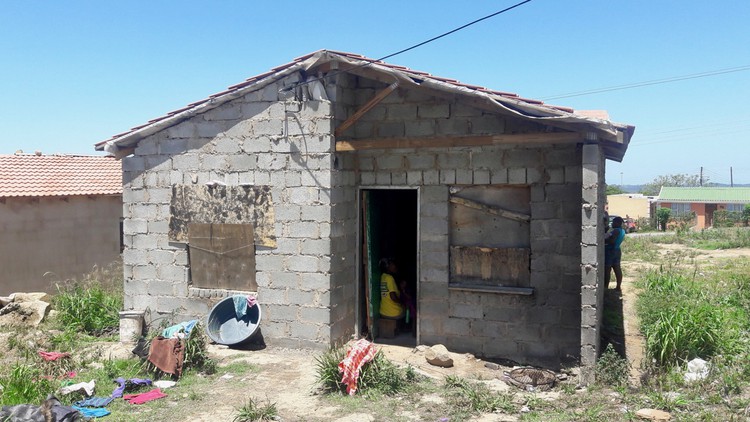 People staying in RDP homes in Velwano, Mdantsane, are living in incomplete houses and appalling conditions. Residents blame the municipality and the Ruwacon construction company. The company denies responsibility. Buffalo City Metropolitan Municipality has not responded to GroundUp’s queries despite repeated attempts for over three weeks to get comment from its spokespeople.

“When they started building the houses we were excited because we were finally going to move out of the shacks and live in a better place. But the way things are now, I think I was better off staying at the shacks. At least there I had a toilet nearby,” says Kiga Ntyala.

Kiga and Nongenisile Ntyala are elderly and suffer from disability. They have to send their grandchildren to fetch water from a tap about 150 metres away. Much of the time it is dry and the grandchildren have to walk 500 metres to access water on the other side of the location before going to school.

The Ntyalas occupied the house in 2017 after it had stood empty for six months. The walls are cracked and there are no windows or doors and no toilet. The family relieve themselves in a bucket or use the veld behind the Mdantsane train station.

Resident Mntubanzi Baka is a wheelchair user. He is 39 and lives alone. He spends R700 of his disability grant to pay people to fetch water for him daily, take him into the yard, and empty his toilet bucket. Sometimes he is stuck with it for days because there is no one to help him.

“Sometimes I have to ask children to go and fetch water for me and their parents don’t like that and they swear at me. But what can I do when I can’t find an adult to help me?” said Baka.

“The government promised they will build me a house that is wheelchair friendly … My room is small. I can’t move around. They [government] said I must ask my doctor to fill in a form. He did that and I submitted it,” he said.

Councillor Gwebile Kosani said he has been trying to help the residents but cannot do anything beyond putting pressure on the municipality.

“The municipality needs to fix this mess. There are cases where more than one person owns the same house. There are lawyers involved. The municipality knows everything. They are aware that those houses were not built properly,” said Kosani.

Nyameka Mana lives with ten family members. They had gone to the local committee active at the time and asked for their house number. They received a house, but to their surprise the walls were unplastered, the ceilings unfinished and it had no doors.

The family depends solely on social grants. They wanted to finish the house themselves, but local builders advised them that the problem was with the foundations and buying cement would not solve it.

“It’s like I am outside, but I am inside a house. I don’t feel safe here … All the rooms are leaking. When it rains, we have to move the furniture. That is the life we are living,” said Mana.

Anda Swelindawo is one of a few dozen lucky residents who received their houses officially, even though they also have problems such as cracks and faulty electricity meter boxes.

“Our houses were handed over to us officially in 2016. There were only 32 of us, while there are 268 other houses. We are also not in possession of the title deeds, but we have a document stating that we are the owners of the houses,” said Swelindawo.

Ruwacon Construction was awarded the tender. Construction started in 2013. Manager of labour relations and legal matters De Waal Boshoff said: “We can confirm that we built the houses and they were built according to the design. The foundation, walls and roofs were inspected and signed off by the engineers, who performed tests on the houses before they signed off.

“We have never received any complaints regarding the project. We completed our part of the project five years ago and de-established our site. Nothing was ever reported to us,” he said.

Buffalo City Municipality communications head Samkelo Ngwenya refered GroundUp to Bathandwa Diamond, who said she has had forwarded our email to the housing department. After many reminders, GroundUp has still not received any comment. Our WhatsApp messages and phone calls have been ignored.