Jamila Janna is becoming an expert in snails 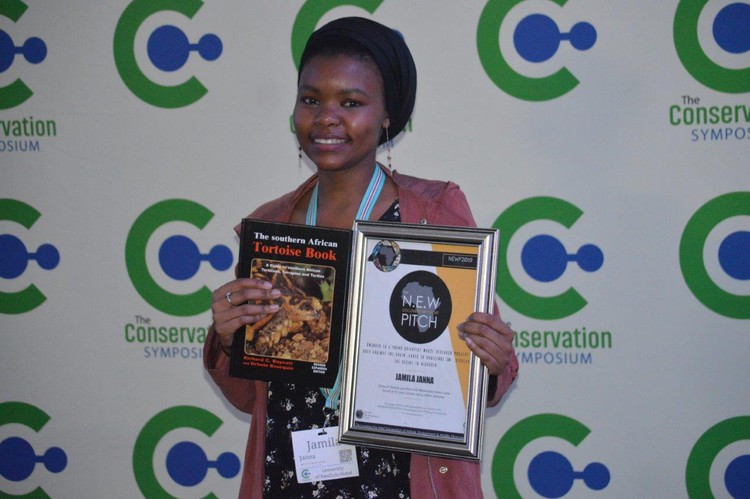 Jamila Janna has won an opportunity to pitch for film funding at the 2019 Nature, Environment & Wildlife Filmmakers’ Congress

By Thabiso Goba and Fred Kockott

The award opens the way for the University of KZN marine biology student to get assistance from international filmmakers in turning her presentation into a short documentary.

The 22-year-old has been studying invasive alien snails at St Lucia Estuary for her honours thesis.

“Receiving the award was a huge surprise,” said Janna. “I have attended the NEWF congress before and was really ecstatic to see what was happening: the integration of science and filmmaking.”

Janna will now get mentored at 2019 NEWF Congress and compete against other aspiring filmmakers in the 2019 NEW Pitch Awards.

Previous NEW Pitch Award winners include a group of youth from Ashdown and Imbali townships outside Pietermaritzburg.

Supported by the Endangered Wildlife Trust, the young “EnviroChamps” work to protect the wetlands and rivers in the area.

“I met them at the 2017 World Wetlands Day,” said NEWF programme director, Noel Kok. “I did not expect youth in the townships to be the heroes of rivers running through the area. I was impressed and challenged them to come to NEWF and tell their story as part of the NEW Pitch competition. They won.”

“They still did not how to make a film, but because they now had money, they were able to get experienced filmmakers to help,” added Kok. The short documentary, The River Gives, has since won two environmental awards, including the SA Breweries Environmental Journalism Award.

The winners of the 2018 NEW Pitch Awards held earlier this year were:

All four winners are now receiving mentorship in producing their short documentaries.

The 2019 NEWF Congress will be hosted from 16 to 18 July at the Durban Botanical Gardens.

“This is so exciting,” said Janna. “It’s going to require me to be creative. I cannot wait to embark on that journey.”

Janna is also a member of ‘Only This Much’ campaign which is advocating for greater marine protection.

Produced for GroundUp by Roving Reporters.