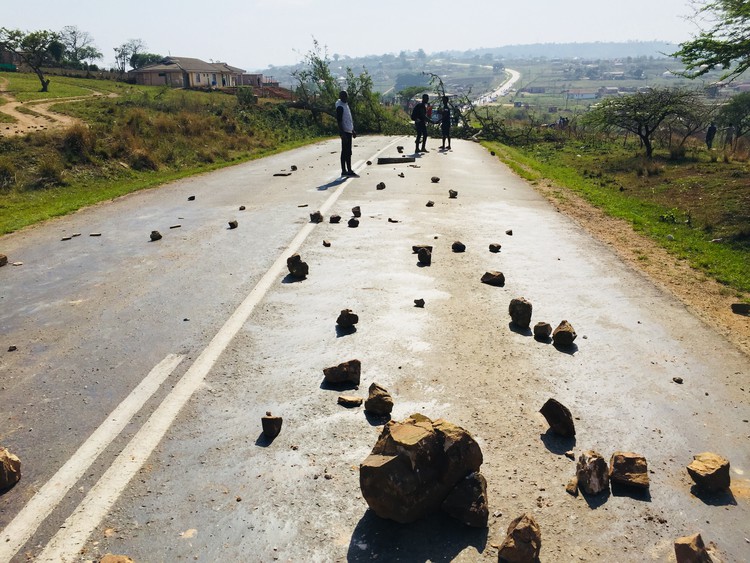 “We are tired of empty promises,” said a protesting resident in Maqongqo in Pietermaritzburg. On Monday the residents barricaded roads into and out of the township with stones and trees and burning tyres, complaining about poor roads and shortages of water.

In March the residents of Maqongqo brought the township to a standstill. The residents, supported by taxi operators and businesses, demanded that the roads be fixed. Mxolisi Kaunda, who was then MEC for Transport and is now mayor of eThekwini, told the residents that by September contractors would start on the roads.

Mluleki Mntungwa, who was the department’s spokesperson, told GroundUp in March that the department was busy with the road design.

But residents said nothing had happened.

Another resident Buhle Zulu said they started the protest at midnight.

“We are fighting for our rights. There are so many issues that we have but we are prioritising the roads for now. Our parents are suffering. Taxis are struggling to use these roads to transport residents to their homes. Taxi owners and drivers are complaining that their cars are damaged by these roads. These are the busiest roads used by the community. We have been complaining for years but our leaders are ignoring us,” said Zulu.

A resident who called herself Mama Hlela from Ehholongo said she was forced to carry her husband on her back when he was sick. She said the ambulance could not reach her home due to the bad condition of the road.

“We encountered the same problem when he passed on. The hearse could not transport his dead body.”

Acting Chief Director of Communications at the Department of Transport Nomfundo Mcetywa said the department apologised for the delays which she said were caused by “our design processes”.

“The infrastructure team is working flat out to speed up the process. Once that has been done, new time frames will be set and communicated.”