Broken lifts and stairs for commuters with wheelchairs 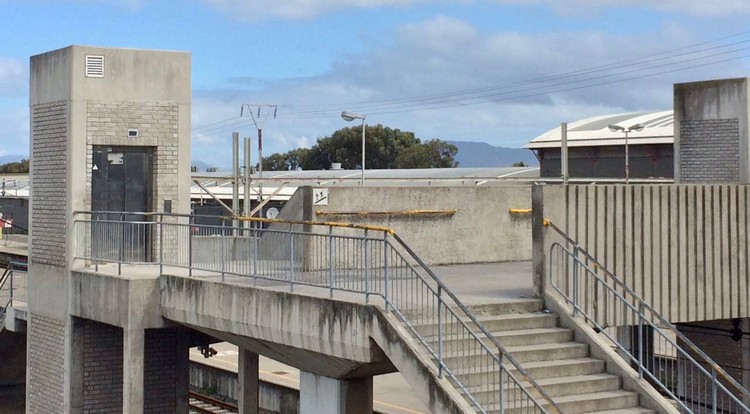 Stairs at the top of Nyanga Junction. The lift on the left is not working. Photo: Mary-Anne Gontsana

There is no time frame on when railway stations in Cape Town will be universally accessible, but they will be upgraded says Metrorail. The trains themselves will only be fully accessible for wheelchair users in two to three years.

The busiest route in the city, the Central Line, runs through Khayelitsha, Nyanga and Salt River, with 16 stops. Ten of these stations are accessible to people in wheelchairs, but at six key stations – Nyanga, Stock Road, Mandalay, Khayelitsha, Lentegeur and Mitchells Plain – lifts and ramps are still under construction, says Metrorail spokesperson Riana Scott.

There is a short ramp at Nyanga Junction but both platforms require the user to climb stairs in order to reach the bridge between platforms. The station has lifts but they do not work, which GroundUp reported a year ago. Vendors have now opened fruit and vegetable stands right in front of the lift doors.

Heideveld station has three lifts, but only one of them works. Salt River station has no lifts, but does have ramps. Khayelitsha station also has ramps but its two lifts are not working.

Scott acknowledged that the South African rail commuter system was not yet “universally accessible” in terms of international guidelines. “Universal accessibility is one of PRASA’s acknowledged priorities. All new assets, facilities and trains will have levels of access as determined by the policy guidelines,” she said.

The policy guidelines include priority corridors, appropriate signage, security, and training of employees to deal with travellers with special needs.

Scott said all new trains would have universal access for people with disabilities, including wide access doors, and doors which automatically open and close. The first trains in the new fleet are expected in Cape Town in 2019/20.

He said QASA was constantly lobbying the transport department to acknowledge the rights of people with disabilities and apply universal design principles in public transport.