Brakpan residents accuse municipality of excluding them from housing project

“They will only remove us in coffins” says protester 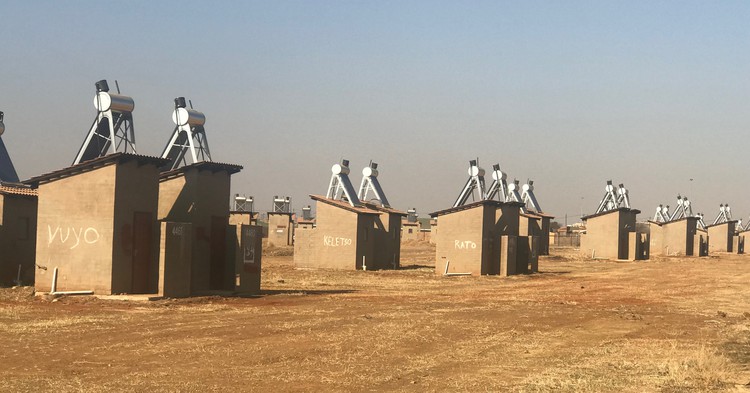 Residents have written their names on these toilet structures that have been built on an old playground as part of a new housing development. Photo: Kimberly Mutandiro

Brakpan’s residents have been protesting because they want the City of Ekurhuleni to prioritise them for houses. The protesters, aged 30 to 40, want to be prioritised above older people and people from outside Langaville extension 4 and 5, where they live.

After three weeks of barricading roads with burnt tyres, they have written their names on 200 toilet structures built on an old playground as part of a housing project.

Abongiwe Gxara of the Langaville Backyard Dwellers said previous ward councillors had promised that houses on the playground would be for his community.

He and his fellow protesters accuse the current councillor for ward 81, Makhosazana Gwayana (ANC), and the MMC for Human Settlements in Ekurhuleni, Lesiba Mpya, of excluding them from the list of beneficiaries.

But Gwayana denied this, saying that the housing department produces the list. “The problem is that certain community members want to benefit by force when they did not even apply for houses. They do not even attend meetings,” said Gwayana.

Meanwhile the houses that are supposed to be built on the playground have been on hold since 2017 after objections were lodged.

Gxara said he and others occupied the same piece of land in 2013. But, he says, metro police demolished the shacks they built, with the municipality telling them they would get houses.

The protesting residents say there has been political interference in the allocation of houses. Resident Ntombifuti Mloi makes a serious allegation: “Fancy cars have driven into our community, coming from as far as Daveyton, claiming that they have bought land for R15,000 to R40,000. If those houses are not allocated to the youth of Langaville we will demolish those toilets and build a playground for our children as it was before,” she said.

She and her two children live in a shack at the back of her parents’ house. She registered for a house in 2017. “I am old enough to have my own place. I will not wait until 2047.”

“If they do not give us the houses we will build shacks next to the toilets. They will only remove us in coffins,” said Gxara.

Some people are sleeping inside the toilet structures to guard against vandalism.

Attempts by GroundUp to get a response from the municipality were unsuccessful.