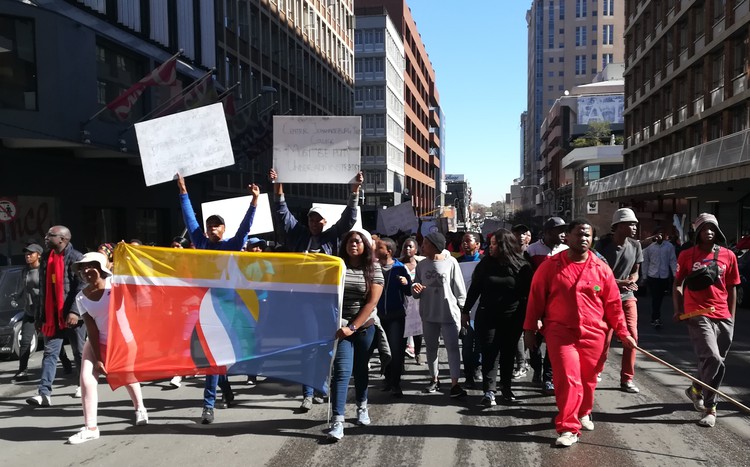 Following a two week strike, cleaners who worked in buildings run by South Point Student Accommodation are to be taken onto the staff of the new management company, Servest.

This was confirmed to GroundUp by several sources. We have also since been informed that all the workers are back on the job.

South Point provides accommodation for students. It has buildings in five provinces. The Braamfontein branch outsources its cleaning services to various companies. The new outsourced company Servest, started on 1 June and wanted to reduce the number of employees to 63.

But the cleaners were opposed to the move. They went on a two-week unprotected strike demanding that all 89 of them be absorbed by Servest. The workers did not belong to a union.

About 100 workers and students marched through the streets of Braamfontein, closing down shops on Friday afternoon. They were waiting for feedback on a meeting between Advocate Dali Mpofu, who was representing the workers, and South Point’s management.

The workers were told that there was an offer and an agreement would be signed on Monday.

One of the cleaners, Maria Ramudzuli, has been working in South Point buildings for about 13 years. She said the cleaners had been moved to about four different outsourced companies over the years.

“Each time we were moved, everyone was moved together. Now this time they want only 60 of us and they only want the young ones. We are tired of being moved around because each time we are not sure what will happen,” said Ramudzuli.

She said the cleaners work an eight hour day and earn about R3,500 per month.

Another cleaner, Ndodana Pumla, has worked in South Point buildings for about 11 years. She said she needed her salary to support her children and grandchildren.

“They [South Point Management] said they will give us two months salary but after that we must fend for ourselves. They only want young people now. So to me it sounds like another way to retrench us,” she said. “Us gogos are the ones who need the jobs, because who is going to hire us in our old age?”

South Point applied for an interdict against the striking workers at the Gauteng High Court on 2 June. An affidavit by South Point’s Facilities Manager Anjoh Poolton, said that South Point and Tsebo Solutions Group had agreed in December 2010 that the contract would expire at the end of May 2018.

She said the termination of the contract resulted in workers “embarking on unlawful actions” like intimidating front desk staff, damaging property, discharging fire extinguishers, flooding parts of the buildings and dumping waste in the lobbies.

“On Thursday 31 May 2018 … the applicant [South Point] informed the protesters that it had arranged to have 63 of the 89 Tsebo cleaners employed by Servest, without any obligation to do have done so. This offer was rejected,” said Poolton.

The interdict was granted which prevented the workers from coming within 100 metres of any South Point building.

Provincial Campaign Manager from Right2Know Thami Nkosi said the interdict infringed on the workers’ right to strike because South Point had “buildings on almost every corner in Braamfontein.”

“If workers are not allowed near the buildings, it means they will have to go picket in Johannesburg CBD somewhere which seems like madness … The interdict is essentially saying workers shouldn’t be striking,” said Nkosi.

He said workers in all other provinces were employed directly by South Point. Braamfontein was the only branch that outsourced the cleaning, he said.

Both Servest and South Point were unavailable for comment at the time of publication.