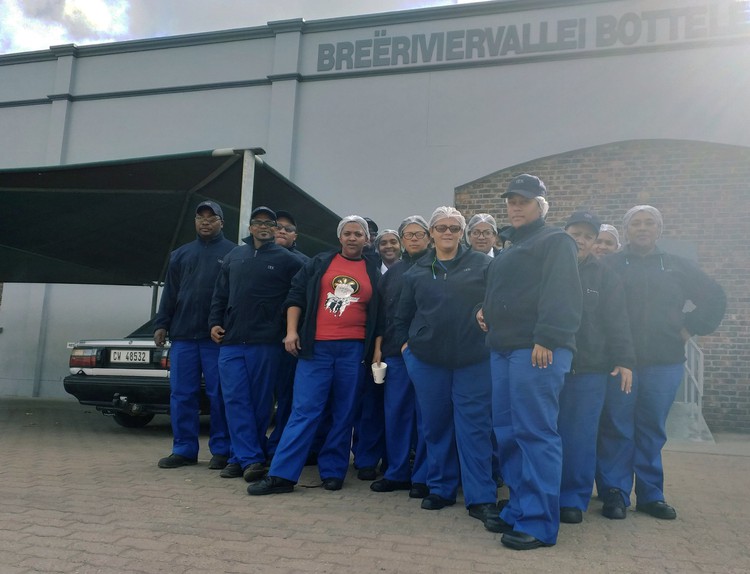 Workers at the Breëriviervallei Bottling company are considering going on strike next week. Photo: Barbara Maregele

More than 80 workers at the Breëriviervallei Bottling company in Worcester are set to down tools next Wednesday. The workers are asking for an 18% wage hike among other things.

Negotiations between the company and the Commercial, Stevedoring, Agricultural and Allied Workers Union (CSAAWU) have been ongoing for several months.

CSAAWU’s Deneco Dube says the company has not budged on any of the workers’ demands since their last meeting on 24 April. “This is why we have applied to strike and gave the company seven days notice. We will be calling on all our members to support these workers,” he said.

When contacted on Tuesday, Breëriviervallei managing director Livingstone Stanley confirmed that they were in dispute with CSAAWU regarding wage demands by their workers. He said the company had not yet received a formal notice for “direct strike action”.

“We will issue a formal response at an appropriate time,” he said.

According to its website, the company offers local cellars and wineries assistance with filtration, packaging, warehousing and dispatch of wine.

Worker and shop steward, Floors Peterse, has been permanently employed for seven years. He says that despite the company’s success, workers were being sidelined and their pleas for higher wages ignored.

“We always hear about how well the company is doing but we don’t see this translated into our pay. But there’s always money for renovations or new equipment,” he says. Peterse says most of the general workers are paid R6,500 per month after deductions while a group of about 37 workers hired in January are paid R4,500 after deductions.

Lydia Matthews was one of the workers hired in January. She says the company initially promised to pay them the same salary as other workers but instead received nearly R2,000 less. “We do the same work but get paid less. It’s not fair. In March, the company also retrenched some of us because they said they hired too many people. How can they do that?”

“I’m a single parent and what we walk away with at the end of the day is not enough to cover my monthly expenses. Most of us will strike next week,” she says.