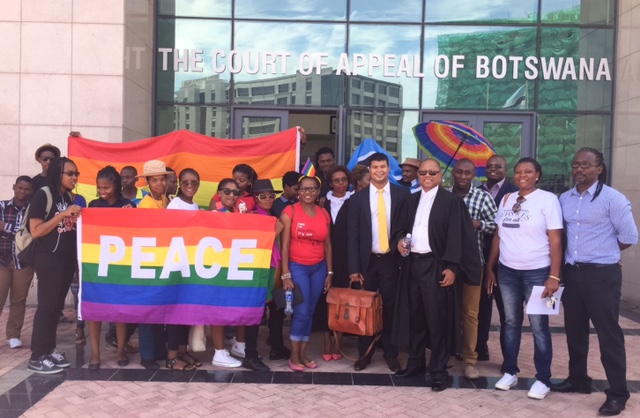 Members of Bonela, LEGABIBO and the legal team outside the Court of Appeal in Botswana. Photo courtesy of LEGABIBO

On 16 March, the Botswana Court of Appeal unanimously delivered a landmark judgment in which it dismissed the government of Botswana’s appeal against a Gaborone High Court decision which allowed for the registration of the Lesbians, Gays and Bisexuals Organisation of Botswana (LEGABIBO).

The case is a victory for the advancement and recognition of fundamental, universal human rights for gay, lesbian, bisexual and transgender persons, both in Botswana, and throughout Africa.

In February 2012, activists sought to have their organisation, LEGABIBO, registered. The Director of the Department of Civil and National Registration and the Minister of Labour and Home Affairs refused the application for registration on the basis, amongst other things, that same-sex practices are criminalised in Botswana, and therefore lesbian, gay and bisexual individuals were not recognised as persons protected by the rights provisions in the Constitution of Botswana.

But the High Court of Gaborone rejected the State’s argument as irrational and ordered that LEGABIBO be registered as an organisation.

The Court of Appeal has now reaffirmed the decision of the Gaborone High Court, by holding that the refusal to register LEGABIBO was not only unlawful, but a violation of the right of LGBTI activists to freely assemble and associate.

It noted that LEGABIBO’s objectives are to “further human rights and the wellbeing of LGBTI persons in Botswana and that advocating for the laws to be changed in and of itself is not illegal. It is the democratic right of every citizen to express their opinions about a law. It does not follow that when an organisation advocates for changes in the law on abortion, the death penalty, or same sex sexual acts, that the organisation or its members is engaging in abortion, or murder or same sex sexual acts”.

The court ultimately found that the Minister based his decision on mere speculation, that the decision was unsupported by evidence, and that it unjustifiably limited the rights of activists.

The Court of Appeal judgment is not only significant because of its promotion of human rights for LGBTI activists, but also because of its recognition and appreciation of the vulnerability of sexual minorities in society. The Court emphasised that although there might be dissenting views, “members of the gay, lesbian and transgender community form part of the rich diversity of any society”.

Notably, the Court mentioned that there was no evidence to the contrary, before it that sexual orientation is not a natural attribute of every human person or that it can be learnt or imposed.

The Court emphasised that homosexuality has never been a crime. In Botswana (as in several other African countries) the law prohibits certain sexual practices between consenting adults. The law does not, however, extend to the criminalisation of sexual attraction to members of the same sex and does not affect basic constitutional rights.

It is worth noting that although sections 164 and 167 of the Botswana Penal Code outlaw certain practices (commonly referred to as “sodomy”) irrespective of the gender and sexual orientation of the perpetrator, these provision are often interpreted and applied to stigmatise, discriminate against and harass same-sex persons.

Importantly, the Court of Appeal held that fundamental rights, including human dignity, are universal and enjoyed by every member of society irrespective of a person’s gender or sexual orientation. The State can only validly limit the fundamental rights of persons if it is reasonably justifiable to do so within the circumstances.

In a similar case, the Kenya High Court also found that it was obvious that a human being regardless of his gender or sexual orientation is a person for the purpose of the Constitution of Kenya. The court found that the rights to equality and dignity would be denied if people were barred from claiming protection from discrimination based on their sexual orientation.

Despite this victory, sexual minorities throughout Africa remain extremely vulnerable to stigma, harassment and arbitrary arrest.

The LGBTI community is in need of assistance in the quest for equal treatment. Arguably, the continued existence of laws in many African countries which criminalise same-sex practices often perpetuate stigma, persecution and discrimination on the basis of a person’s sexual orientation and gender identity.

Moreover, the criminalisation of same-sex acts also pushes vulnerable people away from important health services and information about their sexual and reproductive health needs.

Recently, Nigeria has adopted a law which not only explicitly outlaws marriage contracts or civil unions between same-sex persons, but also the formation of organizations or associations which represents the interest of LGBTI persons. This is contrary to the provisions of Nigeria’s own Constitution and other regional instruments which protect the right of individuals to freely assemble and associate.

Nonetheless, the Botswana Court of Appeal decision represents significant progress in the promotion of the rights of lesbian, gay, bisexual and transgender persons. The judgment has broader implications for Botswana and many other African countries which do not provide recognition of sexual minorities. It highlights the State’s duty to uphold basic rights and to ensure dignity, tolerance and acceptance for marginalised and unpopular groups. It also illustrates the importance of the independence of the judiciary and highlights the judiciary’s role and mandate in the protection of the most vulnerable groups in society.