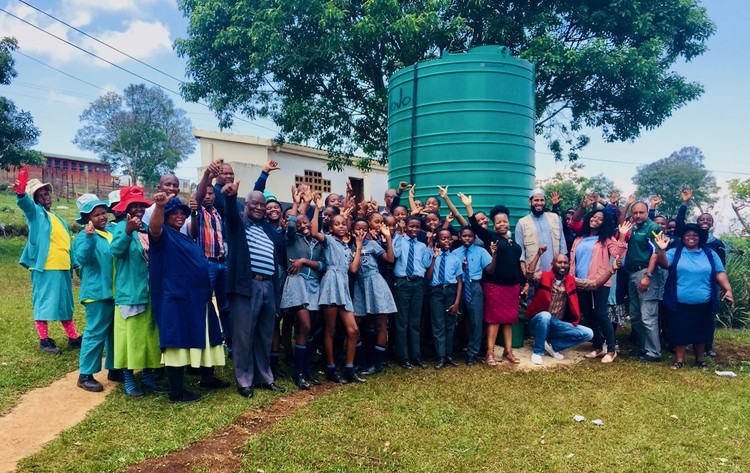 Learners from Gcina primary school next to Mcoseleli Secondary in Pietermaritzburg celebrate the handover of a new borehole with the parents. Photo: Nompendulo Ngubane

Residents of Maqongqo in Mkhambathini, Pietermaritzburg, say they are overjoyed by a new borehole.

Jamiatul Ulama KZN,​​ a humanitarian Muslim community organisation, and Gift of the Givers has built a borehole with four taps to assist the community and another four taps for Mcoseleli Secondary school.

Water tankers have been supplying water only twice a week and residents have resorted to using water from local streams.

Jamiatul Ulama project co-ordinator Billal JeewaIn said the organisation saw a report by GroundUp about how residents in Umkhambathini have to fetch water from an old tank.

Jeewa said the borehole, which is located at Mcoseleli Secondary, can supply 400 litres of water per hour.

Dumisani Mazibuko, a teacher at the school, said, “We are relieved … With the extreme hot weather they [learners] were forced to use dirty water from the stream. The teachers didn’t have water. We had to carry water to drink from our homes to work … We are grateful.”

Ahmed Mahomedy from Jamiatul Ulama said, “There are hundreds of projects we have done since we started in 2014.”

Ward councillor Nhlanhla Zondo said: “It is good to know that the project will benefit both the community and the school. Residents have shown appreciation. They are happy. So am I.”