Border War veterans fall through the cracks of reconciliation

“32 Battalion raped our women. They killed our brothers and sisters. It’s painful living with the legacy of their oppression.” 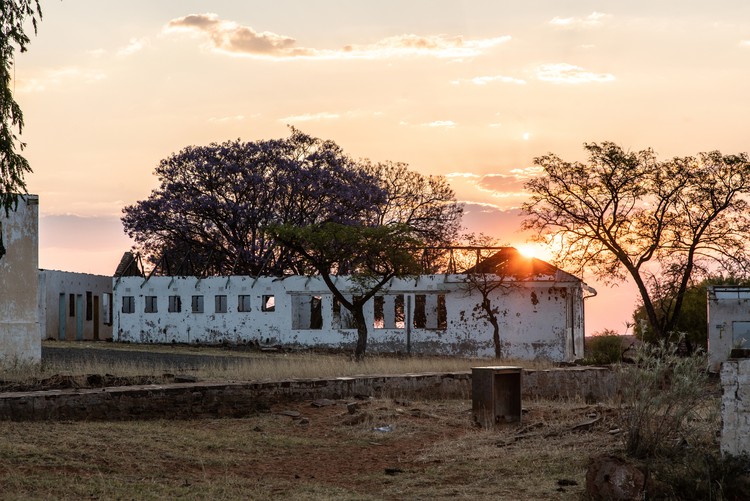 Since Pomfret was closed as a military base in 2000, the town has steadily deteriorated and many of the buildings lie in ruins.

In the crumbling town of Pomfret in North West Province, 85-year-old Eli Viwango, an Angolan veteran of apartheid South Africa’s notorious 32 Battalion, pulls himself up off a broken plastic chair in his immaculately tidy front yard and slowly makes his way into the cool living room. With a laboured sigh, he drops his tired body down onto a beige sofa.

On the wall to his right is a framed picture of one of his nephews in military fatigues. Like a number of the men in Pomfret, a place with an entrenched military heritage and scant job prospects, Viwango’s younger relative served as a mercenary in conflicts across various parts of Africa before he was shot dead in a lover’s quarrel in Bloemfontein.

For his part, Viwango, who has rheumy eyes and a gentle smile, spent almost three decades as a soldier, first as a guerrilla fighter for the MPLA in Angola in the 1960s, then switching sides to join the FNLA during the country’s bloody civil war that began in 1975. Finally, he was recruited into 32 Battalion in 1976.

“If you work, you eat. If you don’t work, you don’t eat,” says Viwango matter-of-factly when asked how he feels about the contradiction of fighting both for and against colonial regimes. “You do what you have to to make sure you and your family can survive.”

Viwango and his family were among approximately 5,000 Portuguese-speaking Angolans settled here in Pomfret in 1989 at the end of the Border War, when Namibia gained independence and the former asbestos mine camp became a South African military base.

Like most of the Pomfret veterans, Viwango, who was granted South African citizenship in return for his military service, has never been back to Angola. Many veterans have died here without ever having returned to their native country. “There are just a few of us left now,” Viwango says. “We have been forgotten. We have been left to die here.” 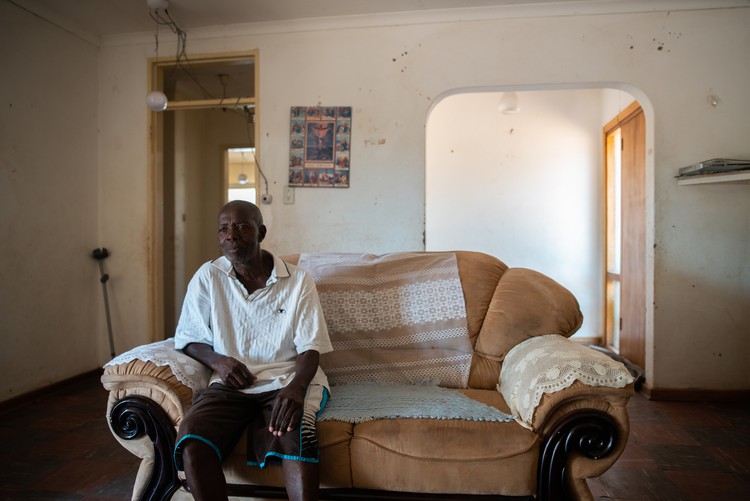 Eli Viwango, an 85-year-old Angolan, says that he and other 32 Battalion veterans have been “left to die” in Pomfret.

Since Pomfret was closed as a military base in 2000 and the Department of Public Works took over its ownership, the town has steadily deteriorated. Today, much of it lies in ruins and most basic services have been discontinued.

Meanwhile, various departments of government in North West Province along with the Ministry of Defence have sporadically attempted to relocate residents to RDP houses in the nearby towns of Mahikeng, Vryburg and Tosca. This is ostensibly due to the risk of contamination from the old asbestos mine, but many residents believe it has more to do with Pomfret’s chequered past.

Whichever is true, the 3,000 or so residents who remain here do so in a perpetual state of uncertainty. “Before we were like trees with strong roots. Now we are rootless, like the wind. We don’t know where we will go,” says Freta Kenga, a 66-year-old veteran and neighbour of Viwango’s.

Alfonso, the 37-year-old son of a deceased veteran who declined to provide his surname, says there’s no easy route out of Pomfret even for the few residents who have the will and the means to leave: “In Angola they’ll tell you you’re not Angolan. In Namibia they’ll say you’re not Namibian. But we’ll never be seen as South African either. So where must we go?”

According to Johann Smith, a security analyst and former 32 Battalion commander, despite the fact that the military veterans comprise less than 5% of Pomfret’s current population of around 3,000 (the rest is largely made up of women and children), there’s “still a prevailing political view that they’re foreigners, that they’re sell outs” that continues to inform the town’s marginalisation.

“You can’t blame the ANC government for taking a stance like that. But by the same token, you can’t just abandon these guys. Through unfortunate circumstances they were forced to shed their blood for South Africa under the old system. They were just pawns in a political game,” Smith adds.

Adrian Vorster, a Pretoria-based advocate, represented many of the Pomfret veterans for more than five years as they fought against the government’s efforts to relocate them and close down the town. He believes that the “residual resentment” directed at residents is largely the result of 32 Battalion’s “misdeployment” after the Border War as a supposed peacekeeping force in townships wracked by political violence in the final throes of apartheid in the early ‘90s.

Both Vorster and Smith say this “sounded the death knell” for the unit, which was disbanded in 1993, after a commission of inquiry led by Justice Richard Goldstone concluded that members of the battalion had acted in a manner “completely inconsistent with the function of a peacekeeping force”.

A settlement called Phola Park on Gauteng’s East Rand bore the brunt of 32 Battalion’s transgressions. According to transcripts from the TRC, during a raid on 8 April 1992, 100 Phola Park residents were “severely beaten with rifle butts”, two women were shot dead and at least four women were raped. 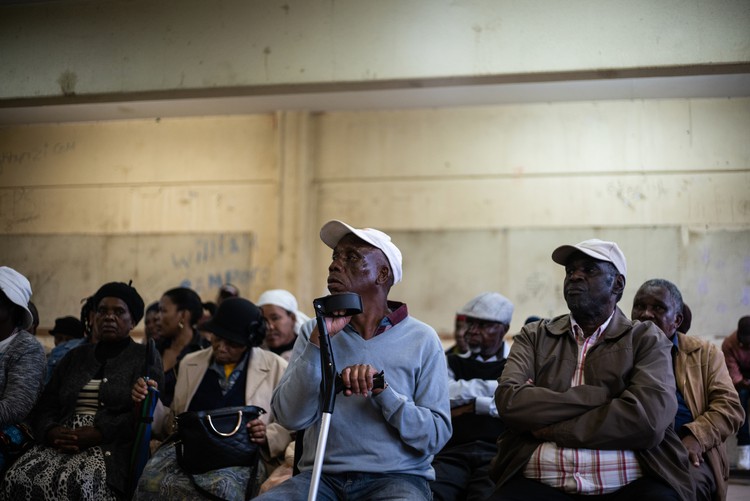 According to Khulumani Support Group, which represents more than 100,000 victims of apartheid atrocities across South Africa, anecdotal evidence suggests that the number of women raped by members of 32 Battalion was in fact much higher. The organisation claims that many survivors were never given the chance to testify before the TRC.

In the aftermath of the Phola Park raid, army chief Let-Gen George Merring said that the alleged acts of violence should be seen “in the context of the onslaught of violence in that area” and that there were “no other proven complaints about misconduct” with regards to 32 Battalion.

But subsequently, more than a dozen 32 Battalion members, some of them black Angolans, applied to the TRC for amnesty in return for testimony concerning their role in a wave of train violence that left hundreds dead in the run up to the ’94 elections. According to a Mail & Guardian article at the time, this was seen as the “first crack” in the South African Defence Force’s denials of their role in so-called “third force” violence aimed at disrupting the political transition.

Once a month at different locations across the East Rand, victims and survivors of this violence still gather together for Khulumani Support Group meetings, where they air their grievances about the lack of justice and reconciliation 25 years later.

At a recent meeting on a rainy afternoon in a drab classroom at Lethukuthula Secondary School in Katlehong, a number of those filing in had to walk with crutches or strollers from injuries they suffered at the hands of the apartheid state machinery. After everyone had found a seat, the meeting was opened with a solemn hymn and a long prayer.

“There used to be a lot more of us,” said Khulumani Men’s Forum deputy chairperson Thabo Shabangu almost apologetically. “But people are dying all the time.”

Shabangu and many others present at the meeting specifically singled out 32 Battalion as the party responsible for much of their suffering, remembering that they overheard soldiers speaking to each other in Portuguese while they carried out their human rights abuses across Phola Park and other parts of the East Rand.

“32 Battalion raped our women. They killed our brothers and sisters. It’s painful living with the legacy of their oppression,” Shabangu said.

54-year-old Zonke Ximba told GroundUp that 32 Battalion was responsible for killing her husband, Thando Ngubeni. On his way home from work on the train one day in early 1993, a group of soldiers blocked the tracks and then opened fire indiscriminately on passengers as they fled from the carriages. A number of witnesses said that the soldiers were black and Portuguese-speaking.

“My husband was not at all involved in politics,” Ximba said. “I’ve been living with so much pain all these years, and I’m still waiting to see if anyone will come and say why they killed him. That is the only thing that will take away my pain.” 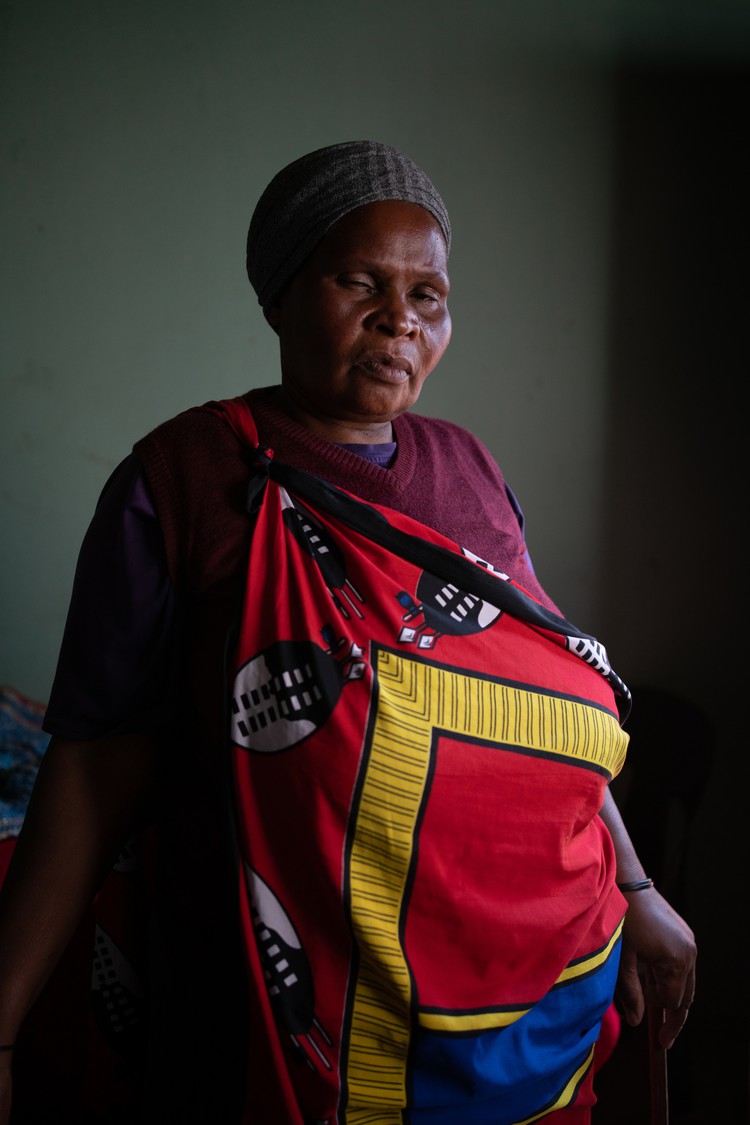 Zonke Ximba’s husband was shot dead on his way home from work early in 1993. Witnesses claimed 32 Battalion was responsible.

For Johann Smith, it was a “critical mistake” to have deployed the battle-hardened and often deeply traumatised black Angolan troops in townships in the first place: “They never had any kind of debriefing after the war. The way they were trained, if someone shoots at you, you shoot back. They just did what they’d been programmed to do.”

But many of the Pomfret veterans as well as their descendants insist that they were on the side of liberation rather than oppression. Martin Antonio, a former Pomfret resident who now lives in Pretoria, says 32 Battalion helped to bring down crime rates and “maintain peace and order” during the transition to democracy. Viwango goes further still: “Anyone who really knows the story of 32 Battalion, they will tell you that we helped to liberate this country.”

According to Angela McIntyre, a researcher who worked with the Pomfret community for a number of years: “Given the kinds of lives that these people led, the displacement, the fighting, the uncertainty, the being on the wrong side of history, I think they need to come up with some kind of coherent narrative for where they’ve been and what they’ve seen in order to move forward. I gave up a long time ago trying to find veracity in the history of Pomfret and just tried to understand it from the perspective of people piecing their lives together. Lives that have been so essentially defined by war.”

It is not only the veterans, many of whom were forcefully recruited as child soldiers in Angola before they joined 32 Battalion, whose life trajectories have been shaped by decades of conflict.

Seeking to stop the relocation of Pomfret residents in 2008, Vorster wrote in an affidavit to the Pretoria High Court that thousands of women and children were also “forced to flee their homes and villages”. For them, as for the veterans, Vorster went on, “the logic of colonial expansion, the Cold War and the freedom struggles, [were] often lost as the need to survive [took] over.”

Raina Kakhu is one of the many women who followed her husband to Pomfret on the eve of Namibian independence in 1989. The couple had met in the late 70s in Namibia’s Caprivi Strip, where Kakhu is originally from and where her husband was based before 32 Battalion moved to Pomfret.

“When I heard we were moving I knew I had no choice. My parents said, ‘You are married. You’re not ours anymore, so you must go wherever your husband is going,’” Kakhu says.

Kakhu’s husband died peacefully in his sleep in 2012 and her five adult children have all left Pomfret to seek work elsewhere across South Africa, mostly in the security sector. “I’m all alone. I miss them,” she says. “I often ask God: who is going to come and rescue the rest of us from this place?” 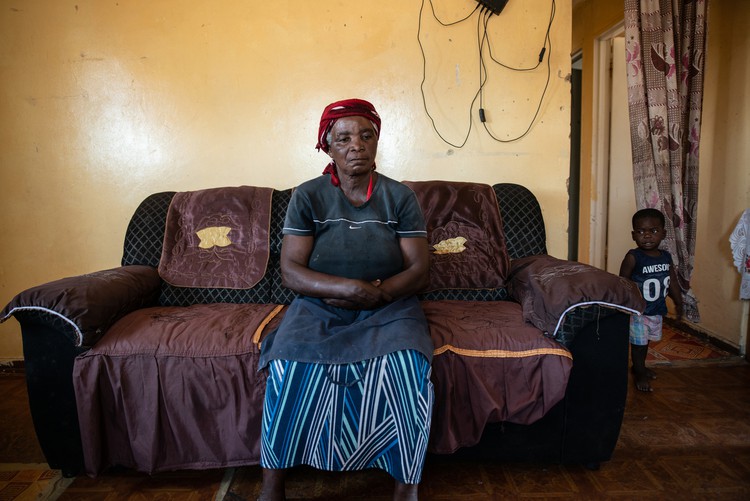 Raina Kakhu moved to Pomfret with her husband, who was a member of 32 Battalion, in 1989.

Back at the Khulumani Support Group meeting at Lethukuthula Secondary School, the rain steadily grew heavier throughout the morning, drumming loudly on the roofs of the classrooms. During a brief lull in proceedings, Shabangu stepped outside for a cigarette.

When it was cold and wet like this, bullets that are still lodged in his body from the violence of the early ‘90s cause him terrible pain.

While Shabangu said he was willing to forgive the soldiers of 32 Battalion for what they were “made to do” by the apartheid government, he scoffed at the idea that the veterans had repositioned themselves as liberators.

Motioning towards the classroom behind him, where the protracted meeting would continue for at least another couple of hours, he asked: “Do you see any free people here?”