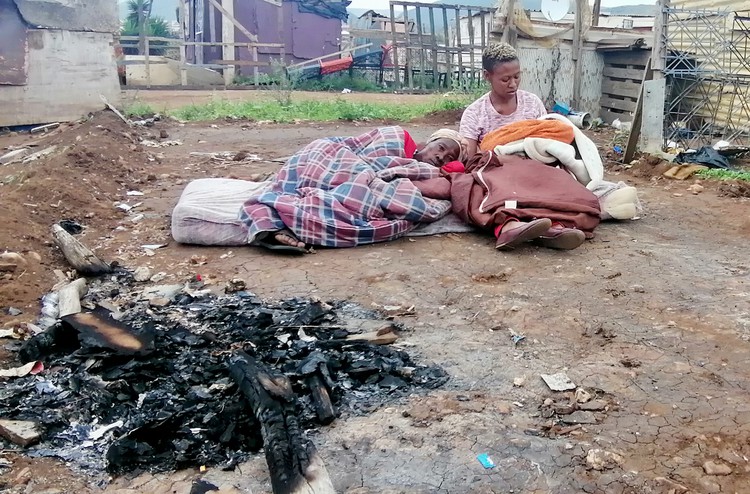 Selina Mbetheni, her daughter, Thozama Sobe, and grandchildren sleep next to a fire to guard their shack materials after relocation from Vastrap to Jaagvlakte stopped. Photo: Mkhuseli Sizani

Tensions are running high after the relocation of residents from Vastrap informal settlement to serviced sites at Jaagvlakte, Port Elizabeth, was stopped on Monday.

Anger over disappointed expectations, empty promises and long delays in the relocation of residents from Vastrap resulted in violent protests last month. Now the relocation, involving 877 Vastrap households, has been halted by Mayco Member for Human Settlements Andile Mfunda after residents from another informal settlement, Qunu, demanded to be included.

After five days of protests last month, including the torching of an ambulance, the municipality sent a surveyor to Jaagvlakte last Thursday. Mfunda then gave the go ahead for 327 sites to be occupied by Vastrap households that are at the top of the relocation list. The sites at Jaagvlakte have tarred roads and water pipes for each household, though taps still need to be connected.

Relocation started on Thursday and continued until Saturday with 117 Vastrap households being transported by municipal trucks.

However, 11 households, who had dismantled their shacks anticipating that relocation would resume on Monday, have been left out in the cold now that the relocation stopped. This happened after Mfunda met with community leaders from Vastrap and Qunu at the municipal offices at Noninzi Luzipho Building (Pleinhuise) on Monday afternoon.

Daniel Makeleni, a Vastrap community leader, blames Mfunda for the mess. “The relocation has stopped because we couldn’t agree with Mfunda’s way of decision making. Everything was going smoothly from Thursday until Saturday 11am. People on the list of relocation dismantled their shacks to avoid delays. But Mfunda ordered the trucks not to come to Vastrap on Monday and called us into an urgent meeting.

“In that meeting he told us that he has taken a decision that Vastrap and Qunu should get 50/50 of the 327 serviced sites,” he said.

“We then suggested to Mfunda that we know and understand the pain of Qunu people because they used to live here in Vastrap. But these 327 sites must be given to Vastrap residents because we fought hard for them. But we can share 50/50 of the remaining 550 sites that will be made available in Jaagvlakte after they have been finished to be surveyed,” said Makeleni.

He said Mfunda opposed their suggestion. “He said he was not asking us. But that was his final decision … That made us very angry. As a result we ended up insulting one another. We walked out of that meeting … Mfunda leaves us with no choice but to go back to the streets and cause something bigger than chaos,” he said.

Vastrap resident Sinazo Mchebi said, “I dismantled my shack on Thursday hoping that the truck will come and take me to Jaagvlakte. But the relocation suddenly stopped … Thugs have stolen my TV, gas for my fridge and my wardrobe is broken. And some of my building material has been stolen … This is painful. I thought this will be a moment of joy for me and my two children. But I am in tears.”

Selina Mbetheni, 64, her daughter, Thozama, with a baby and toddler have been sleeping out in the open. “We would not be in this situation if our leaders were managing this relocation properly,” said Mbetheni.

“On Monday night it rained and we have sleeping on this mattress since Thursday,” said Thozama.

On Tuesday, residents of Qunu blocked Stanford Road with burning tyres and rocks.

Siyabonga Myoyo, a community leader, said, “Mfunda gave us a go ahead in that meeting to tell our people who are on top of the relocation list to dismantle their shacks. Because today [Tuesday] he will send relocation trucks. We did that by dismantling shacks of 20 elderly and disabled people. But the trucks never arrived. Now, the people have no place to sleep and their material and furniture is exposed to criminals.”

According to Myoyo, Qunu has 1,486 households. It was formed after people who had invaded RDP houses in 2014 were evicted by the municipality and police.

“But why now does Mfunda not apply the law against the people who are disrupting this relocation? This will result in bloodshed and war if residents solve it themselves,” Myoyo said.

On Tuesday morning, a third group, who call themselves Ward 29 backyard shack dwellers, stormed the office of ward councillor, Vukile Dyele (ANC), and demanded that they get 10% of the Jaagvlakte serviced sites.

Speaking for the group, Thandisizwe Makhaphela, said, “Mfunda told us ‘nonsense’. He said we should go and register ourselves in backyard shack dwellers database in George Botha Community Hall in KwaNoxolo township.”

“It was Dyele from the beginning who said we should assist him by playing an active role by and going to Mfunda and asking for our 10% … We did that and now we are shutting down this office and no relocation will take place here until we get our 10%,” said Makhaphela.

Dyele said, “They are entitled to their 10% and they have been getting it in the previous relocation projects … Right now I am on my way with their leadership to meet with the executive director of land and planning to resolve this matter.”

Mfunda denied that he had divided communities. “We are leaders and our responsibility is to bring service delivery to the people … Also we cannot allow the individuals to do as they like. We are leaders and we must show the way … Both Qunu and Vastrap must get 50/50 of the 327 Jaagvlakte sites.”

But he refused to answer our question about the backyarder group’s demand.

“I am a politician. Please direct all your other questions to the officials who are handling this matter,” he said.