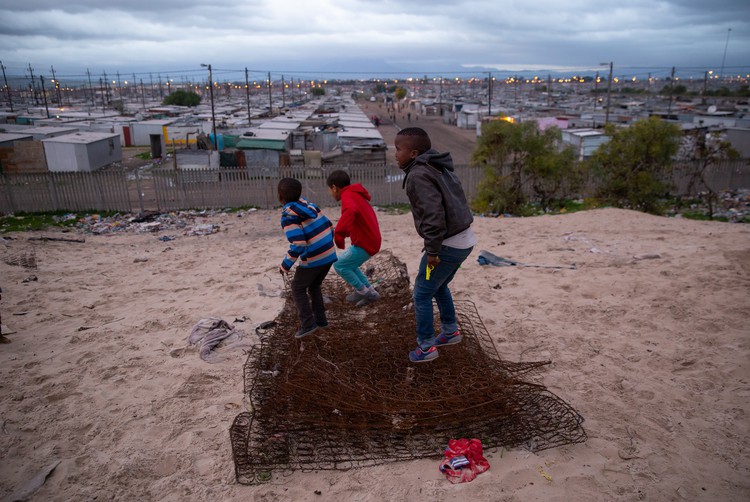 Children playing on a hill just outside Blikkiesdorp, a temporary relocation area about 25km from Cape Town’s city centre.

“That I still stay in a leaking shack even though the City approved my subsidy for an RDP house four years ago is absurd,” says Petronella Sebastian.

She lives in a leaking shack in Blikkiesdorp with her two children and her grandchild. The 53-year-old woman is partially blind and deaf. She takes high blood pressure medication and receives a disability grant.

“Every time I go to the local housing office to ask about my house, officials tell me to wait,” she says. Her house is cold and there is high crime in the area, Sebastian says. “My son got robbed at gunpoint last night.” 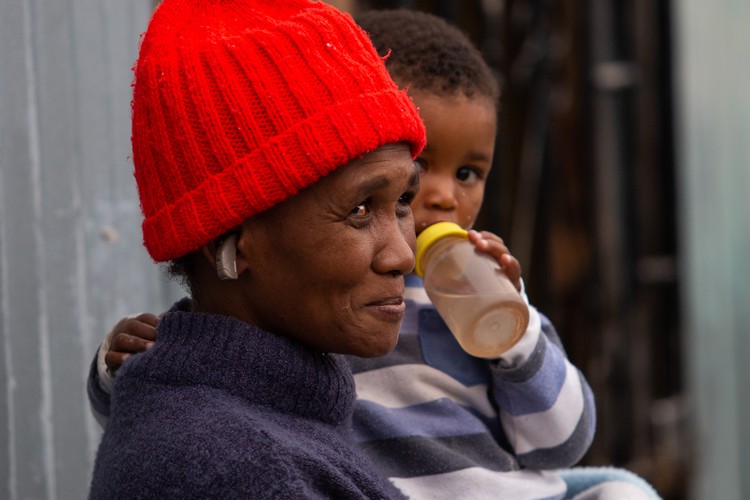 Petronella Sebastian is partially blind. Here she is holding her granddaughter.

Blikkiesdorp near Delft is what the City of Cape Town calls a Temporary Relocation Area. It is where the City moves people when, for example, they have been evicted and have nowhere else to go. Although it is supposed to be temporary many people have lived here since 2009, when they were relocated from shacks along Symphony Way. Now it is home to about 2,000 families, who live in tin houses. The City says residents will be moved to new housing projects once they are completed and the Blikkiesdorp land will become part of a future extension of the Cape Town International Airport.

But residents are frustrated about the delay in getting RDP houses. Sebastian says that on 15 January officials allowed her to see her house, which is still under construction. “I’m frustrated with the pace with which the City builds my house. It has been under construction for two years,” she says.

“I want a brick house now because it is much warmer than a leaking shack. Here I must cover myself with many blankets to get warm when I sleep,” she says. 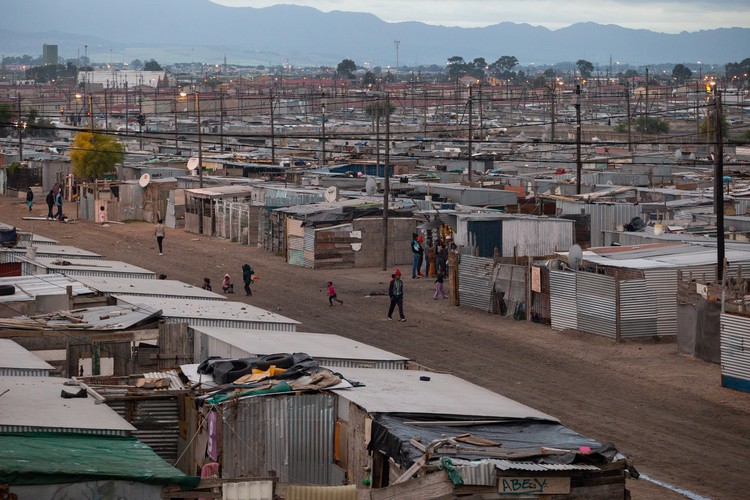 Blikkiesdorp is home to about 2,000 families.

“However, the City’s Transport and Urban Development team has been making every effort within their means to get the projects back on track so that the beneficiaries can receive their housing opportunities,” says Herron. The City plans to finish the projects within the next two years.

Ashley Cornelius has been staying with his five children and two grandchildren in a cold shack for a decade. “Life is not easy here. My roof leaks and my kids can’t sleep on their beds,” he says.

Cornelius says the City approved his RDP subsidy two years ago. He checks if his house is ready at the local housing office on a weekly basis. At one time his name didn’t appear on the system, but now it appears, he says.

Cornelius, who uses a wheelchair, says. “Once I get a house, I will thank God.” 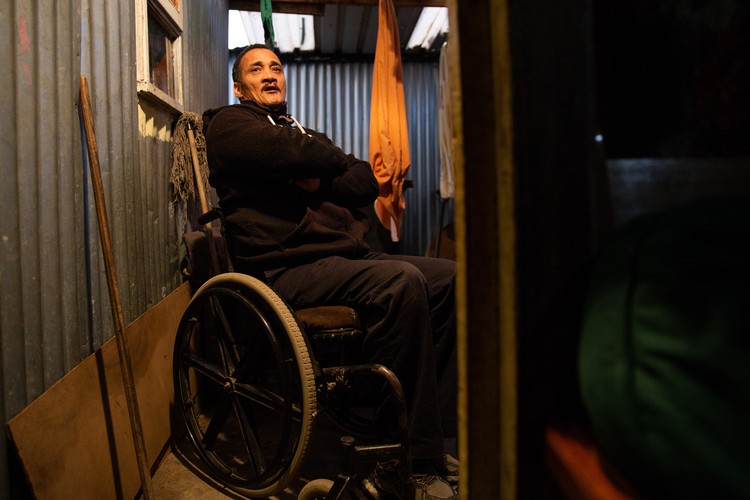 Ashley Cornelius uses a wheelchair. He has been staying in Blikkiesdorp for almost a decade.

Community leader Zuleiga Dyers says the roof of her shack has started leaking. “When I move around barefoot inside or touch the corrugated iron, I get electric shocks,” she says.

She lives with two children aged 15 and 8. She applied for an RDP house in 2004 and the City approved her application in 2015.

She has twice gone to the local housing office to find out if her house has been built, but has been disappointed both times. “The officials say it doesn’t take long to build a house, but why mine is taking long?”

“I want to leave because rapes and robberies happen too often here. You can’t even walk at night.” She says she wants the mayor to spend a day or two in Blikkiesdorp and “feel what it is like to stay in a shack during winter”.

The residents were about to protest at the local housing office when GroundUp visited them, but the rain stopped them. 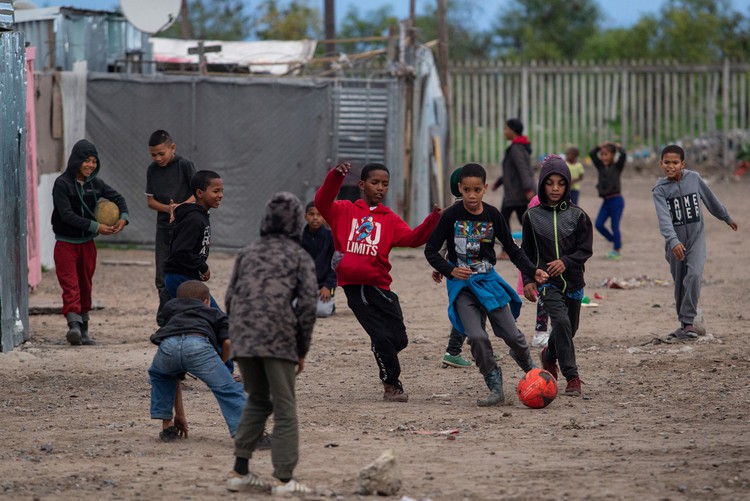 The City of Cape Town’s housing project in Delft consists of three phases:

Unfortunately, the Delft The Hague Phase 1 and The Delft The Hague Phase 2 and Eindhoven housing developments have experienced some delays, which have consequently delayed the handover of the houses to selected beneficiaries. However, the City’s Transport and Urban Development team has been making every effort within their means to get the projects back on track so that the beneficiaries can receive their housing opportunities.

The Delft The Hague Phase 1 housing development (1,012 units) was delayed due to poor contractor performance which resulted in the City terminating their contract in September 2017. Another contractor has been appointed since February 2018. This project is under way.

We sincerely regret the delays caused by the poor performance of one of our contractors. Termination of a contractor and then procuring a replacement contractor is a complex process that is highly regulated by legislation. This means replacing a contractor that doesn’t complete the project, due to poor performance or liquidation, is not seamless and this is a frustration we share with those waiting for their house.

The Delft The Hague Phase 2 and Eindhoven (1,100 units) housing development commenced in February 2018 but has been delayed due to local subcontractors making unreasonable demands. The City, together with the project steering committee, is making every effort to address these matters so that the project can continue.

The City plans to finish these projects in the next two years and will continuously engage with the community through the Project Steering Committee.