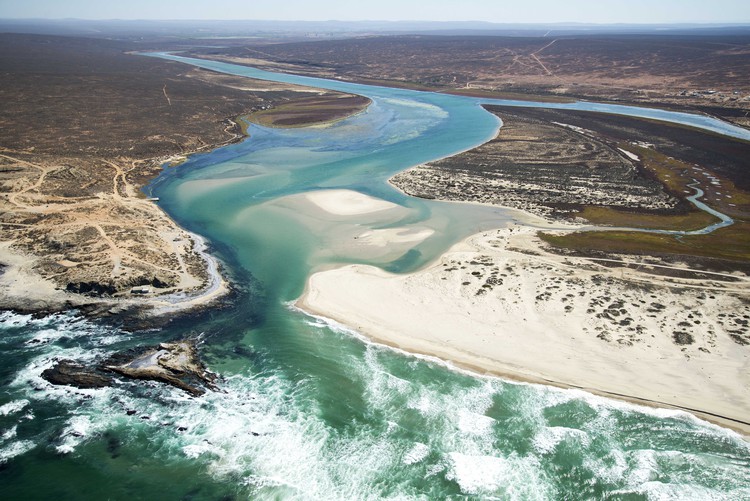 The lovely Olifants River estuary on the West Coast near Lutzville. A crucial meeting is being held this week to finalise a legally protected status for this threatened area. Photo: John Yeld

The future of one of South Africa’s most important biodiversity areas – the Olifants River estuary on the West Coast near Lutzville – could be decided at a crucial meeting on Wednesday 4 December.

This is when various government departments and conservation agencies come together at a meeting hosted by CapeNature to try to finalise a consensus proposal for legal protection for the estuary.

This issue has been argued inconclusively for more than a decade.

However, formal protection of the estuary – one of the largest on the South African coastline that is listed as a Critical Biodiversity Area (CBA) and ranked in the top five estuaries based on a conservation-worthy index – has now become urgent because of the threat of increased mining operations in the region.

The proposed format of the new protected area is a provincial nature reserve as the core, managed by CapeNature and including certain state-owned properties that qualify for protection, such as “Coastal Public Property”.

The national environment department has been looking at a second option in terms of the Olifants River Estuary Management Plan, investigating properties feasible for declaration as “Special Management Areas” under the National Environmental Management: Integrated Coastal Management Act. 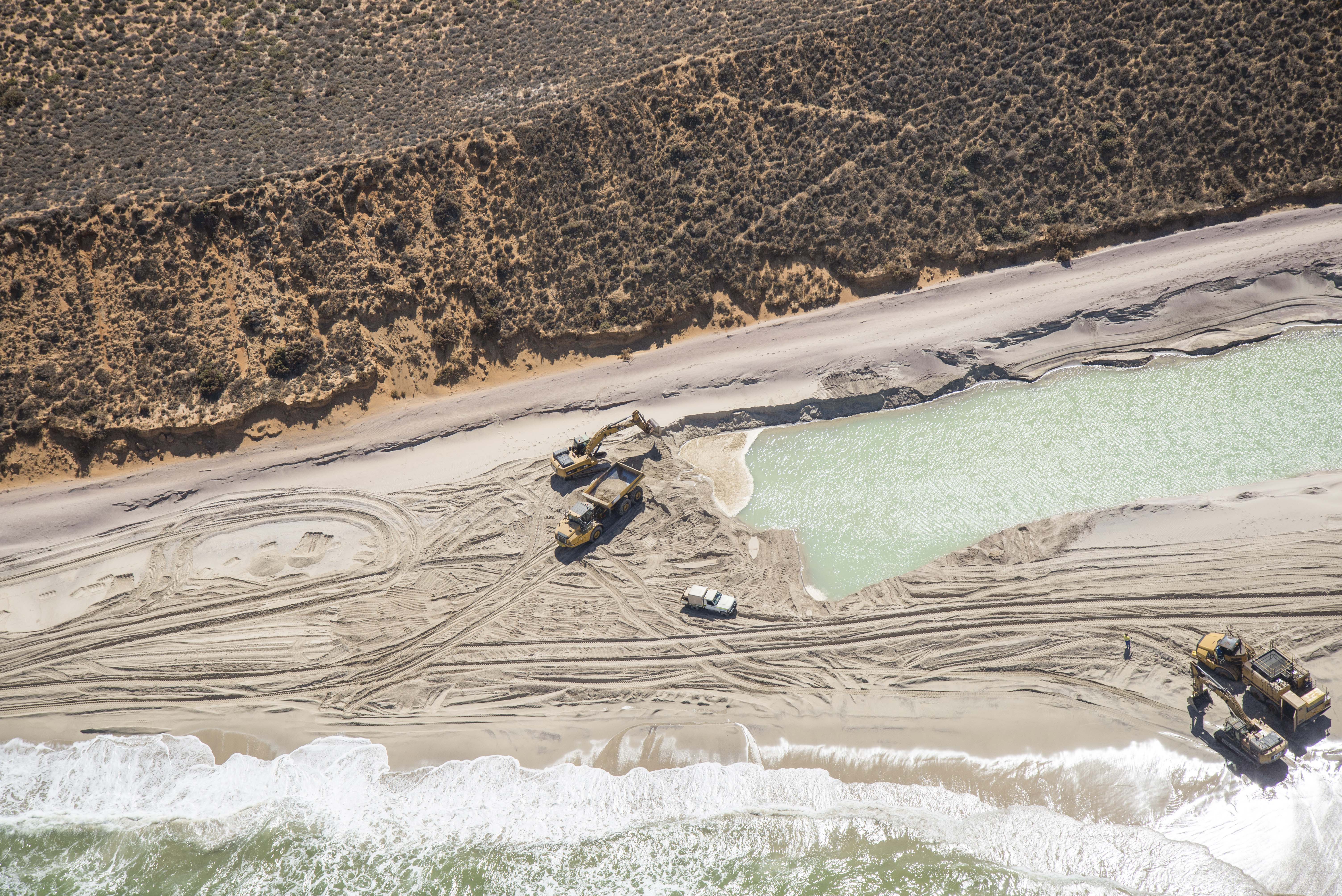 The West Coast has been subjected to massive diamond and mineral sands beach mining operations over many kilometres over many years.

A new threat is a major prospecting rights application for two farms on the northern boundary of the Olifants River, stretching from the De Punt property at the estuary to a point 17km upstream.

This application was submitted by Mineral Sands Resources (MSR), the local subsidiary of controversial Australian mining company Mineral Commodities Ltd (MRC) that operates the nearby mineral sands mine Tormin.

MSR was granted a prospecting right for zircon, ilmenite, garnet, leucoxene and rutile on the two properties by the Department of Mineral Resources in May last year, but two appeals against this were partially upheld in April 2019.

In April the Department of Mineral Resources ordered the mining company to revise its Basic Assessment Report. This report had been compiled by controversial consultant Adriaan du Toit, who had claimed to be independent (a legal requirement) but who was later shown to have extremely close links to MSR and MRC.

New consultants, Strand-based Site Plan Consulting, were appointed with a brief to produce an updated assessment report that included more details of possible impacts of prospecting on the Olifants River estuary, as well as more detail on prospecting methods and the layout of proposed drilling sites. The new report had to be subject to a round of public participation.

Their draft updated assessment report, incorporating findings and recommendations of a 2009 Olifants River estuarine assessment study by Anchor Environmental Consultants, was released for public comment last month, with a closing date of 20 January 2020.

The updated report confirms the “extremely sensitive” estuary bank marshes and flood plains within the prospecting right area and the west bank of the river, all clearly identified as “definite ‘no-go’ areas”. It also states that a 500m “no-go” zone between the prospecting drilling and the western boundary of the estuary boundary should be one of the conditions of approval.

Overall, however, it confirms the findings of Du Toit, to the effect that prospecting operations that involve the drilling of numerous test holes, will not have any significant negative environmental consequences or impact on the estuary and its other users.

But this benign assessment is currently being challenged by local groups, including some traditional small-scale fishermen. A heated meeting held in Ebenaeser on 26 November as part of the public participation process ended abruptly with a walk-out by most of those attending, leaving just seven in the audience to listen to the consultants.

Stephen van der Westhuizen of Site Plan Consulting, who hosted the meeting, told GroundUp that he and his colleagues had done everything required of them and had been ready to make a full presentation that would cover all the issues. However, he said the fishermen present had “incited” others to leave and described the walk-out as “unfortunate”.

“It was for political reasons. They have their own agenda … It was a totally objective assessment [by us] but they never waited to listen to it.”

Van der Westhuizen accused the fishermen of having “a hidden agenda” as they were opposed to mining. His company had only assessed the effects of prospecting and this would have “absolutely no impact” on the estuary, he insisted. “The fisher community is not going to be affected – those are the findings of the study.”

Veteran fisherman and former leader of the informal river fishing group Koos van der Westhuizen told GroundUp that most of the attendees had walked out because they felt they were not properly acknowledged in the public participation process and their views were not taken into account.

Speaking in Afrikaans, he said their previous efforts in the public participation process had led them into “a dead-end” – “We wanted to show our displeasure and unhappiness.”

Aletta Goliath, a community member from Papendorp who also attended, confirmed that proceedings had “turned a bit ugly” and that those who left had been unhappy at the tone of the meeting.

She also said that they objected to MSR being the applicant, as the company’s “pretty promises” to the community in earlier mining applications, such as work opportunities, had not materialised.

“Every time the same things are repeated, and they don’t meet their promises,” she said, also speaking in Afrikaans.

“Following a protracted period of deliberations between authorities and the community, CapeNature is hopeful that, with the support of partner authorities, organisations and the local community, this dream can become a reality within the very near future.”

Professor Merle Sowman, head of UCT’s Department of Environmental and Geographical Sciences, who has been working with the Ebenaeser fishing community for the past 25 years, said all the parties trying to find a fair and effective conservation mechanism for the Olifants River estuary had struggled, “because the law is complex, and the land issue is complex”.

“It’s a top priority to ensure some level of protection for the area, but to find the appropriate legal mechanism that at the same time respects the rights of the fishing community, has been extremely difficult, and it’s been contentious while the process was underway.

She said no government agency had taken the lead “and this is why it’s been really difficult to move forward”.

While the various government departments and conservation bodies have been discussing what to do, mining interests have been systematically applying for and/or obtaining new mining and prospecting rights over more and more of this coastal area.

If current prospecting and mining applications and potential rights transfers all materialise, virtually the entire 111km coastline of the Matzikama municipality and much of the coast of the West Coast District Municipality further north could become off-limits to the public – in direct contradiction of the aims and objectives of the Integrated Coastal Management Act.

This was where the biggest problem occurred, Sowman suggested.

“There have been these incremental, ad hoc, approvals of prospecting and mining rights while no-one has been addressing the big picture – the overall impact of all these rights on the coastal environment. It’s a point that we made in our appeal against the approval of prospecting rights on the northern bank of the Olifants River.”

Although two of these appeals were upheld, this decision was not based on concern about the cumulative impact on the region, she added.

“So I’m going to be making this argument strongly in our comments to the minister now in the new appeal that has to be submitted by 20 January.”

Disclosure: one of the researchers who worked on the Anchor Environmental report is marine scientist Dr Ken Hutchings, who is John Yeld’s son-in-law.