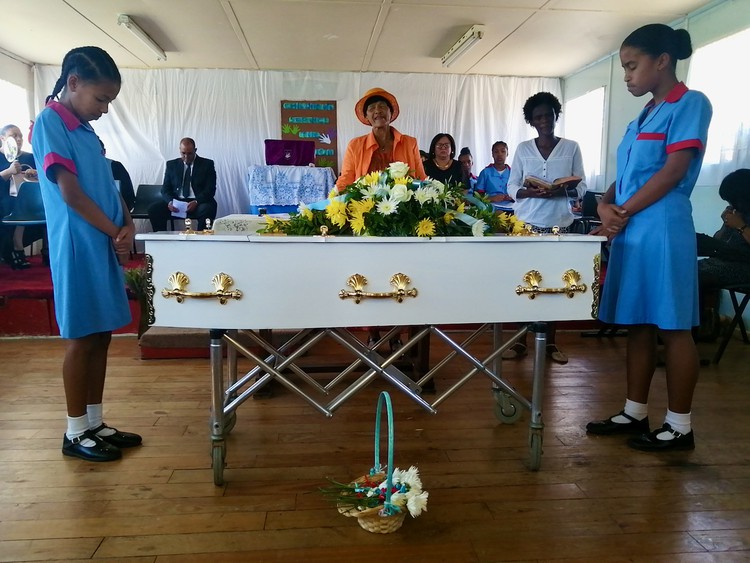 Classmates of Royden Plaatjies, who was nine years old when he was electrocuted by an illegal connection, pay their respects at his funeral at Soutpan Primary School, Port Elizabeth. Photo: Mkhuseli Sizani

About 200 mourners attended the funeral of Royden Plaatjies, who was electrocuted by an illegal connection two weeks ago. He was nine years old and playing ball with his two brothers near his home in Riemvasmaak informal settlement, Bethelsdorp, Port Elizabeth.

The funeral was held at Soutpan Primary School in Arcadia on Saturday. The family had prepared for 50 mourners, heeding to the national disaster call by President Cyril Ramaphosa as a precaution to prevent the spread of Covid-19.

But mourners defied that call, angered by the conditions under which they are living in Riemvasmaak. The settlement has 500 households with only four working communal water taps, a bucket system for toilets, no formal electrification and no rubbish collection. Learners have to cross the Chatty River to get to schools.

Mourners said Royden was the fourth person to be electrocuted in the last five years.

Royden’s parents, Raldo Bell and Sharon Plaatjies, could not hold back their tears.

Soutpan Primary School principal, Julian Erasmus, said that although everyone was “panicking about the coronavirus that has just arrived in our country”, “there are many children who [have] died like Royden here because there were no precautions taken for their safety”.

He said, “It is high time now as the communities we stand up together for the safety of our children.”

Thembela Makabane, who had rushed Royden to hospital in her car, said: “Royden died in my hands. He died a painful death because of our negligent municipal officials including our ward councillor … Not a single official attended his funeral.”

“Royden must not die in vain. We will go back to the streets and burn tyres,” she said.

Community leader Lynodia Douglas said: “On Monday evening we are meeting with our neighbours, the Kliprand informal settlement, who have the same problems … We want to join forces and fight for a better life. Enough is enough.”

Ward 34 Councillor Johny Arends (DA) said: “I couldn’t attend the funeral because I am deacon at Bethelsdorp Congregational Church. Our reverend had called us to discuss the precautionary measures against the coronavirus. But before and after the funeral I visited the family to express my condolences.”