Belhar school houses overspill of learners in a tent

The no-fee school is battling to raise the tent’s R10,000 rental fee for next month 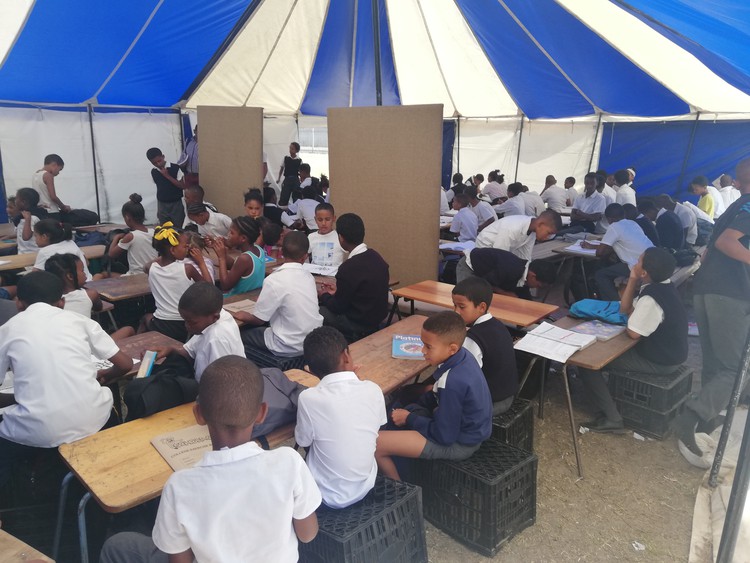 Matroosbergweg Primary School in Belhar has been accomodating an overspill of 152 learners in a tent since the start of the academic year. Photo: Thembela Ntongana

Two small cardboard billboards are the only thing separating three different classes being taught in a large tent in Belhar. The tent is being rented by Matroosbergweg Primary School to accommodate a spillover of learners in at least two grades.

At a monthly rental fee of R10,000, the large tent accommodates 152 learners, two grade 5 classes and a grade 6 class. It is on an open field directly in front of the school.

Lillian Miller, School Governing Body chairperson, said that the school has been battling with overcrowding for the last five years. There are currently 1,400 learners at the school. “Some classes have up to 69 learners like our grade 7 class. We are a no-fee school. Where are we going to get the money to pay for the tent next month?” she said.

Miller said the school first anticipated a growth in learner numbers in February last year. Despite their plea for additional mobile classrooms and 60 desks, the Western Cape Education Department (WCED) only supplied chairs for foundation learners, she said.

Miller said the school had considered numerous options in the community to house the overflow of classes. “We even considered having different times where some learners come in the morning and others [later in the day]. This, however, wouldn’t work because learners come from different areas and transport would be an issue,” she said.

“We cannot have the children in this situation long term … There is nothing protecting those children should there be shootings right in front of the school,” said Miller. When GroundUp visited the school, the tent was noisy with all three teachers making their best attempt to conduct their lessons. Learning in this environment has proven to be difficult for many of the learners, most of whom are sitting in desks too small for them or on used crates.

A grade 6 learner said: “We go home and school starts again because we want to understand what we missed in class. There are too many of us and it is always noisy making it hard for anyone to work.”

WCED spokesperson, Jessica Shelver, said the department has asked the school for an updated list of learner’s names, ages and grades. “Once we have these facts, we can then determine what additional resources are required,” she said. “The school has requested additional mobile classrooms and teaching posts. This will be considered based on the learner numbers and grades.”

“We will also experience another spike in learners at the end of January, after payday, when learners travel from other provinces or areas to take up places in schools,” Shelver added.