Having missed the peak tourist beach season, vendors want the government to help them recover 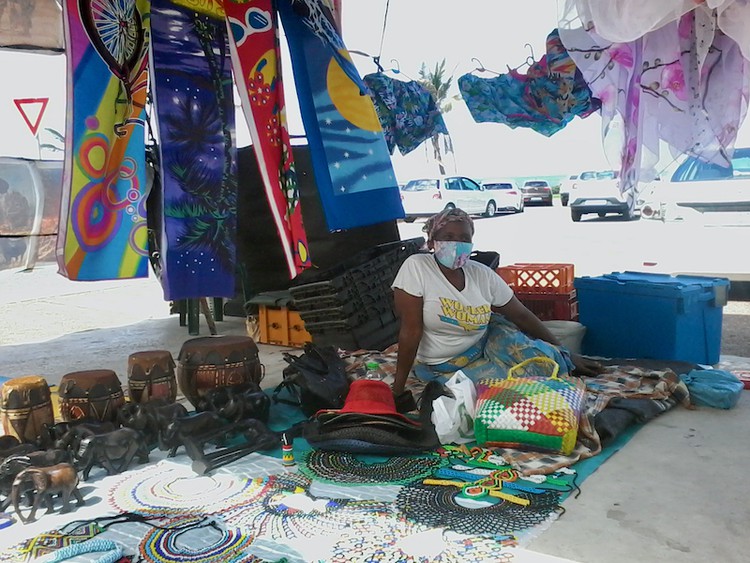 Thembisile Ngidi has been trading at the Durban beachfront for over 15 years. She says government needs to help traders like her recover from the beach closures. Photo: Nokulunga Majola

Traders who missed the peak tourist season say that despite the announcement by President Cyril Ramaphosa on Monday night that beaches are now open once again, the damage has been done.

Thembisile Ngidi, who has plied her wares on Durban beachfront for 15 years, says the busiest days of the year are in December, and this season they weren’t able to sell a thing.

“I come here to sit the whole day doing nothing. Sometimes, I keep myself busy by making beads, but what is the point if no one is going to buy them?” says Ngidi.

She sells a variety of items from R40 to R150, including animal sculptures and hats. Her turnover used to be between R400 and R1,500 a day.

“This is the first time in years that I go home empty-handed, and it has been happening day after day,” Ngidi said.

She has five mouths to feed. She no longer has enough money for transport, and she has to walk from Thokoza Women’s Hostel to the beachfront.

“The most frustrating part about all of this is that no one thinks of us. We are suffering. We also need some sort of relief from government,” said Ngidi.

Another trader, Andile kaLusipha, who for ten years has been selling hats, caps and towels at North and South beaches, said he hasn’t seen a profit since March 2020. It costs him R52 a day in transport, and he goes home having sold nothing.

“Government must intervene. We are really struggling. Without tourists visiting our beautiful city, we cannot make money,” said KaLusipha.

He has a wife and three children to support.

“Things will never be the same,” says rickshaw driver Bonginkosi Sukazi. “People are scared of the virus and those that come to the beach are not really interested [now] in our services.”