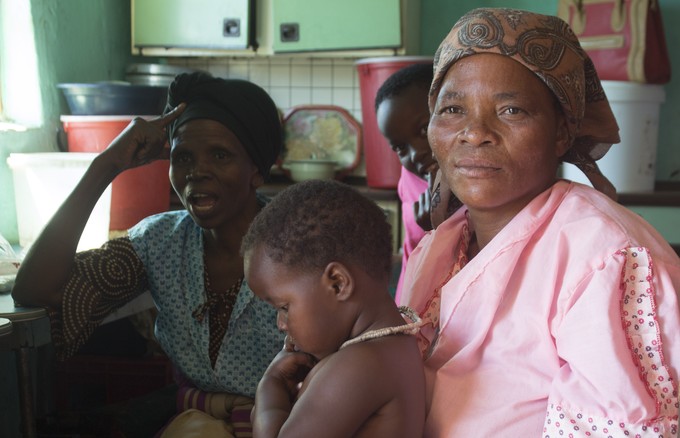 Cynthia (not her real name) and members of her family.

This is part two of our series on dagga farming in the Eastern Cape. Read part one.

In March 2014, while harvesting marijuana in a remote valley outside Port St Johns, Cynthia*, now 56, was sprayed with herbicide from a police helicopter.

“The pilot spotted me and flew closer,” she said. “I was frightened and tried to run, to shelter beneath a tree. But the helicopter followed me.”

As she ran the rotors beat metres above her head, blasting her with dust. The noise disoriented her. Eyes shut, she waved her arms, signaling for the pilot to stop. Then she felt the droplets against her skin.

“It burned and itched. The poison smelled of strong chemicals. Afterwards, there were black marks on my body.”

Cynthia recounted the incident two years later, in March 2016. She was sitting in the doorway of her home, a modest brick structure tucked out of sight of the nearest dirt road, in a nondescript village where marijuana cultivation is ubiquitous. The black marks on her skin had faded and were no longer visible. She wore pink overalls, plastic sandals, and a patterned brown headscarf. A grandchild with dripping nostrils rested on her lap.

A marijuana farmer since her early teens, Cynthia relies almost entirely on the illicit herb for an income, her harvest feeding into Africa’s largest domestic cannabis market. She also farms maize, but struggles to access a market dominated by commercial producers; mostly, her family’s food crop is for subsistence. The dagga she grows is of poor quality, earning her R600 per 30-litre tub — a fraction of what cheap dagga sells for on the street. The money is enough to buy a month’s groceries, leaving extra for savings if Cynthia’s buyers take two tubs at once.

“I paid my two children’s school fees with intsangu (dagga),” she said, opening the door to a cramped lounge. “I added this extra room to my house.”

She stood proudly on the vinyl floor, in front of two armchairs, a display cabinet, piles of cooking pots, and a small television set. A bowl of plastic fruit was on the table.

“What upsets us,” she said, turning towards the window, “is how slowly the police respond to ordinary crime. When it’s dagga they come so fast. Why do they treat us like criminals?”

For at least 60 years the South African government has targeted local marijuana producers as part of its anti-drugs strategy. In February 1957, after five policemen were killed during a dagga raid in the former Natal province, 22 Drakensberg villagers were found guilty of murder and hanged. Though subsequent confrontations have been less bloody, the state’s stance towards rural marijuana producers has changed little since then, with millions spent on eradication programs each year.

South Africa is regarded a “major cannabis producing country” by the United Nations Office on Drugs and Crime (UNODC). The quantities of marijuana seized annually by the South African Police Service (Saps) consistently rank among the highest in the world; in 2005, only Mexico and the United States reported seizing more. South Africa is also a transit hub for marijuana grown elsewhere in the region — for instance Lesotho, Malawi, and Swaziland — and exported overseas, drawing the attention of international law enforcement agencies such as Interpol, who in 2002 listed South Africa as one of the top four herbal cannabis sources in the world.

In 2004, the United States government donated a helicopter and three aerial spraying devices, worth more than R1.6 million in today’s terms, to the Saps Air Wing. The US ambassador to South Africa told News24 that it was “in the US interest … [to assist] fighting the drug trade.”

But export-quality marijuana, which can be worth thousands of rands per kilogram, is nothing like the majat (cheap dagga) Cynthia and thousands of other Pondoland villagers produce. Instead, their harvest supplies the lower end of the domestic market, hawked across the country in bankies and stoppe filled with twigs.

South Africans who produce high-grade marijuana, of whom there are many, including this middle-aged couple arrested in Vredehoek recently, have access to skills and capital beyond the reach of most rural farmers — aside from expensive seeds, growing good weed requires working knowledge of plant physiology and genetics. Yet it is rural farmers who bare the brunt of aerial eradication operations conducted by the police.

Cynthia first recalls having her marijuana fields sprayed in 1986, back when her village fell within the boundaries of the former Transkei. Before that, police patrols cleared plantations by hand, burning uprooted shrubs with petrol. “It was better that way,” Cynthia said. “Word spread whenever the cutters were coming. We always harvested some of our crop before they arrived.”

Switching to aerial spraying has allowed the police to cover much larger areas than before. In 2007-08, for example, the Saps Cannabis Eradication Program reported spraying some 1,754 hectares — an area roughly twice the size of the Cape Town City Bowl. But while spraying is efficient from a policing perspective, notwithstanding its reliance on an increasingly discredited war-on-drugs paradigm, its impact on villagers’ health is likely damaging, with evidence that Saps pilots routinely flout health and safety regulations.

Glyphosate, the chemical used to clear marijuana plantations, is the world’s top-selling herbicide. It is most commonly marketed under the brand name Roundup. Last year, the World Health Organisation’s International Agency for Research on Cancer (IARC) declared glyphosate a “probable carcinogen” after reviewing studies of its effects.

Agrochemical firm Monsanto, the manufacturer of Roundup, contested the findings, accusing the IARC of “cherry picking” data to suit its “agenda” and hiring consultants to rebut the IARC’s conclusions.

“Glyphosate poses no unreasonable risks to humans or the environment when used according to label instructions,” a notice on Monsanto’s website states.

But label instructions for Kilo Max, the glyphosate formulation used by Saps, suggest wearing elbow-length gloves, eye protection, waterproof clothing, and “impervious footwear” when preparing the substance. The instructions also specify what to do in case of skin contact: “Immediately take off all contaminated clothing. Wash skin immediately with cold water, followed by soap and water … Contaminated clothing should be washed before re-use.”

Cynthia is not the only Pondoland villager to have been directly sprayed with glyphosate. An old, hunched man, seated next to her on a plastic chair, said that he had been sprayed across his back and shoulders a few years earlier. “The poison stung,” he said, rubbing his hands on his knees. “It made me cough for months.”

Meanwhile, activists opposing the Saps spraying program have filmed testimony of another marijuana farmer — from a different village — who claims that pilots sprayed him after he raised his arms in surrender, in 2015.

“They came very low,” the man says in the video. “Even the cows scattered. [The pilots were] spraying hard. I thought the helicopter was going to knock me over.”

Reports like these form part of a legal challenge currently being mounted against the spraying program by environmental lawyer Ricky Stone. Stone is acting on behalf of pro-cannabis group Fields of Green For All, the Transkei Animal Welfare Initiative, and the Amapondo Children’s Project, as well as affected villagers.

In January 2016, Stone requested the spraying program’s immediate suspension, pending an independent review of its “effectiveness, appropriateness, and compliance” with local and international regulations.

To give one example, the SABS regulations specify that the public must be “informed about [spraying in their area] by notices posted at relevant sites.” Saps officials refuse to comply with this requirement, arguing that doing so would undermine their operations and place their pilots at risk.

“The SAPS will not inform you of the dates of planned law enforcement operations,” Lieutenant General E Mawela wrote to Stone. “This ofﬁce is not aware of any situation in the world where the police must pre-warn offenders before [operations] can be conducted.”

According to Saps statements, their spraying program is legal because glyphosate is registered under the national Fertilisers, Farm Feeds, Agricultural Remedies and Stock Remedies Act. While this is true, a 2010 Department of Agriculture policy on pesticide management states that the Act, adopted in 1947, is “outdated” and needs to be “revised/repealed”:

“Of the more than 3000 pesticides … approved for use in South Africa, many have not been re-evaluated for years. Their safety … has not been reassessed to bring them in line with today’s more stringent standards of risk assessment.”

In a letter to Stone on 22 January 2016, Saps officials also wrote: “[Glyphosate] is registered to be applied by means of aerial application as per label instructions and may therefore be applied by ﬁxed wing or rotary wing aircraft, according to [SABS] specifications.” [Emphasis added.]

Leslie London, professor of public health at the University of Cape Town, told GroundUp that while glyphosate had relatively low toxicity and broke down quickly in the environment, its probable health risks outweighed any benefits of spraying marijuana plantations.

“It is simply irreconcilable with good practice to spray a potential carcinogen from the air,” he said. “You have very little control over where the chemicals end up – they can drift for kilometres.”

He added that the burden of proof for demonstrating glyphosate’s safety ought to rest with Saps, not the public, because “it was Saps that decided to spray.”

An “expert report” on the potential health impacts of glyphosate, commissioned by Saps and prepared by Dr. Gerhard Verdoorn, Director of the Griffon Poison Information Centre, will be the focus of a separate GroundUp article next week.

A few kilometers up the road from Cynthia’s homestead, Luthando Dinwayo, Chief of the Manhlaneni Tribal Council, listened to a presentation by Ricky Stone and a group of Port St Johns activists. The group plans to interdict Saps from spraying again, after their requests for a temporary suspension were refused twice. To do this, the group needs to partner with tribal authorities and identify suitable communities for launching a legal application.

“This is a very poor area,” said Dinwayo afterwards. “A lot of people rely on dagga for survival. People have been growing dagga here for generations. Spraying affects rivers, animals — many things. I support these efforts to stop it.”

Cynthia was not at the meeting, and did not know it was taking place. It will take time before concern from environmentalists and dagga advocates translates into grassroots action. Instead, Cynthia toiled in her fields, harvesting marijuana bushes stunted by summer drought. It was the first time in more than two decades that her village hadn’t been sprayed by mid-March. (No spraying has been reported in the region yet this year.)

“When I hear the police, I run,” she said a few days later. “Even when I go to town I feel afraid, like the police will know I grow dagga just by looking at me. But I’ll never stop. It’s the only way I know to make money.”

* Cynthia’s name was changed, though she did not request this. All people photographed in this series gave GroundUp permission to do so.

Kimon de Greef is a freelance journalist from Cape Town.