A dispute over who should clean the informal settlement’s toilets is escalating. 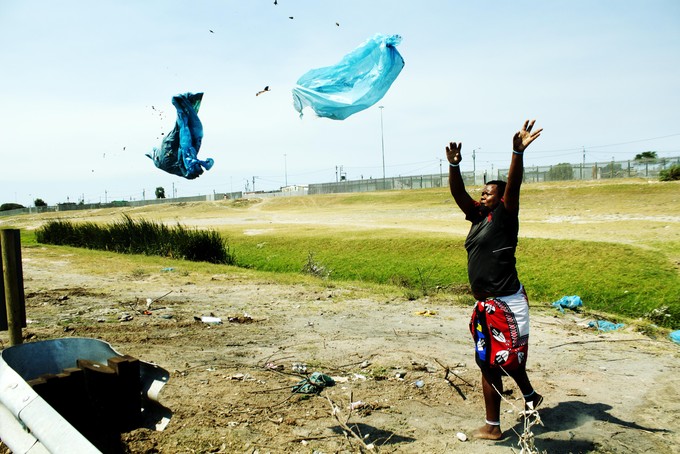 Protests broke out again last night on the N2 next to Barcelona informal settlement. Residents are furious that portable and communal toilets haven't been cleaned for weeks.

This morning residents emptied a communal toilet into large plastic bags and carried it to the side of the N2. Some threw the packets onto the road. While they were doing this, a police car arrived, so the residents ran back into the informal settlement.

Another toilet that GroundUp saw was supposed to service three homes but it was overflowing and crawling with maggots.

Community leader Mpintshi Tafana refuted this today, telling GroundUp that there have been two different lists. The community was happy with the first list that was handed over two weeks ago but the new list that they were given last week contained a different list of names, with only a few names appearing on both lists.

Mongami Mbilie, who is also a community leader, said that both the portable toilets and the communal toilets in Barcelona have not been cleaned since 31 December when the old contract ended.

He said that the community wasn’t told why there was a new list. “All of a sudden he [Nqavashe] came and changed the list,” Mbilie said.

In response Nqavashe said that the first list was randomly generated and then taken to the community for comment to see whether everyone on it still qualified for the job (e.g. still lived in Barcelona and were unemployed). He said that there were complaints with the list, meaning that some people on it didn’t qualify anymore. A new list was then generated.

Nqavashe said that there are two groupings in Barcelona that “fight each other for power”. Due to complaints with the second list he said that tomorrow he will be speaking to the residents to sort the issue out.

Mbilie explained that “residents empty [the toilets] in the canal and some of them dig holes.”

“The residents empty them [the toilets] in the canal and some of them dig holes,” said Mbilie.

“It is terrible. There are all these maggots. You can’t even sit on the toilet. Some of the toilets are close to the houses and you can see it [the sewerage] running into the house. It’s not good because of this heat as well. If you clean it yourself it only lasts two days before the maggots come. And for the children’s sake it is also not right,” he said.

The stream into which residents throw their sewerage is also by an area where children often play and livestock come to graze. We saw a cow grazing along the stream.

Resident Vuyiswa Mkendla said that the situation was “very bad” and that she had to use all sorts of cleaning agents to clean her toilet, which was expensive.

Tafana said that if they haven’t got answers soon they will go back to the N2 to protest.