Department of Health promises employees will get salary within hours 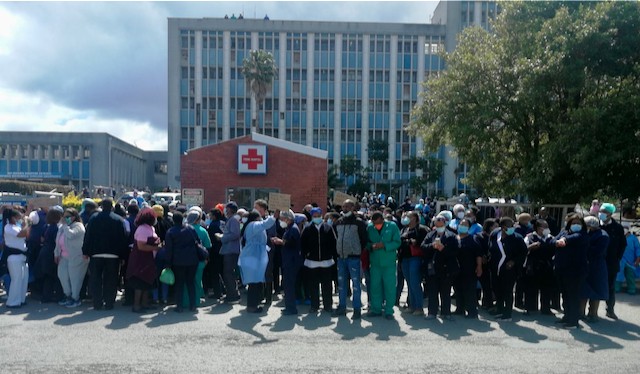 At Frere Hospital in East London, nurses, administration staff and cleaners blocked the entrance and turned away ambulances on Friday. Photo: Johnnie Isaac

At Frere Hospital in East London, nurses, administration staff and cleaners blocked the entrance and turned away ambulances at about 1pm on Friday.

Protesting workers said the department already owes them for overtime and night duty.

Thabisa Matwa, who spoke for the Frere Hospital workers, said management told them that the no work no pay rule will apply.

“We are being bullied by the hospital management instead of addressing our concerns,” she said.

She said they were aware that the department was in debt because of medical legal claims. “If we don’t stand for our rights and demand what is due to us … we won’t get anything,” she said.

“We can’t accept to be the last when we are the first when the country needs us to deal with the Covid-19 pandemic,” said Matwa.

Some workers said they had been shot at by police, and a passerby showed GroundUp she had been hit by a rubber bullet on the back. Vuyelwa Sitho said, “When I addressed them [police] … they told me that I must move out of the way as they are just doing their work.”

Eastern Cape Head of Health Department Dr Rolene Wagner said, “Whilst I understand the anger and frustration of our workers, we cannot allow unprotected [strike] action, especially where it affects the services we provide to our communities.”

She said ABSA bank experienced a technical problem when processing the payment.

“When it was brought to our attention yesterday [Thursday] that employees had not received their payments, we immediately engaged with ABSA and our provincial Treasury.”

“The first payment batches have gone through successfully. ABSA has confirmed that our employees can expect their salary adjustments to be reflected in their bank accounts from 1:30pm onwards if they bank with ABSA and from 6pm if the accounts lie with other bank accounts,” said Wagner.