“What’s the use – they give a toilet but it doesn’t work,” says Parkwood resident 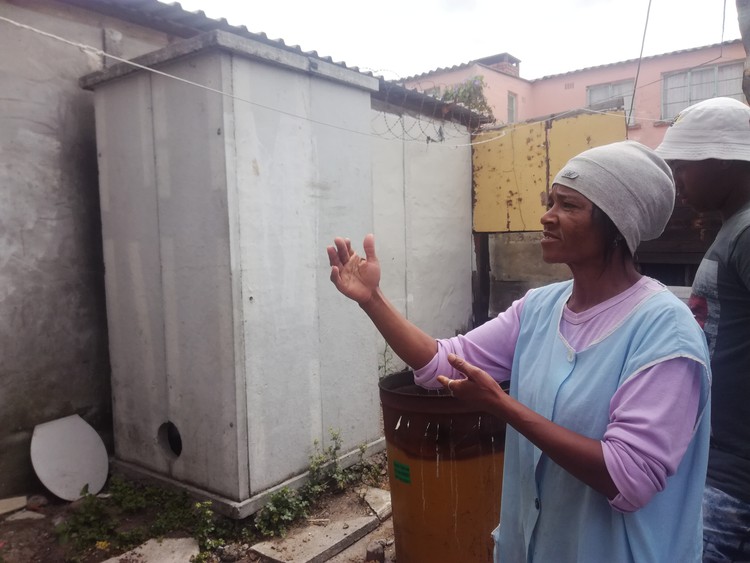 Parkwood resident Chrystolene Johannes says her family has been using the concrete stall as a store room. She says City of Cape Town contractors never completed the installation of the toilet in her backyard. Photo: Barbara Maregele

Four years ago, the City of Cape Town launched a project to bring services, such as sanitation and electricity, to backyard dwellers living on council-owned properties. The project at the time was lauded for its success, with a total of 693 full flush toilets and wash basins installed and 942 electricity connections made across the city.

According to a City media statement in July 2014, over 160 toilets, concrete walls, taps, washing troughs and sewer connections were installed for Parkwood backyarders, at a cost of R1.2 million.

GroundUp recently visited backyarders in Parkwood, where according to residents, the installation of 20 toilets was never completed. Residents say they have abandoned their attempts to get the City to resolve the issue.

“What’s the use – they give toilets but it doesn’t work,” says Parkwood resident Chrystolene Johannes. Her family has been using the concrete toilet stall as a store room because the sewage and water connections were never completed.

“We were home all the time so I’m not sure why this toilet was never fully installed,” she said.

Johannes also complained of the derelict state of the council flats. “We also pay rent like everyone else. But only the flats near roads, which people can see, get done,” she said.

Margaret Hermanus, 61, says her daughter and grandson rent a structure in her backyard. She says they often use her toilet and water.

“They [the City] installed everything but never connected it … My daughter and her son have to get water by me in the main house. We as tenants only get 350 litres of water and have to share it with the backyarders. If that water is done, then we have to wait until the next day to get water again,” she said.

“The City didn’t even give us a reason why our toilet was not connected. We are tired of the council only doing half jobs,” she said.

Backyarder Hilary Davids says her toilet was fully installed and had been working fine until six months ago. “The toilet was initially working fine until two men came to inspect it. I’m not sure what they did, but after they left, it wasn’t working anymore. When I reported it to the municipality, they said my box number didn’t exist.”

Ward councillor William Akim says he is aware of the problem and acknowledged that not all of the toilets were installed correctly. “The maintenance was also shoddy … We went around to the different backyarders and noted all of the issues related to the toilets and the meters. On Tuesday, I sent an email to the City’s department to notify them about this,” he said. “We are going to arrange a walkabout with some of the contractors and the City officials to look into all of these things.”

Mayoral Committee Member for Informal settlements, Water and Waste Services; and Energy, Councillor Xanthea Limberg, said that a service provider has been appointed to do maintenance on the toilets in January. “We will also be looking to expand the project in the area. This infrastructure has unfortunately experienced high levels of theft and vandalism and we ask residents to please report any such incidents,” she said.