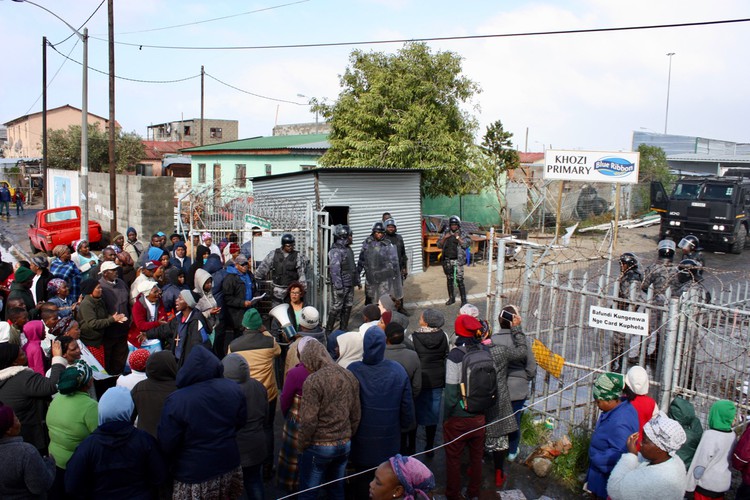 On Wednesday, dozens of parents demonstrated outside Khozi Primary School in Joe Slovo Park near Milnerton after the Western Cape Education Department (WCED) executed an interdict to remove the makeshift school.

As reported by GroundUp in May, the school, which accommodated nearly 400 learners, was opened by the community after children were turned away from Marconi Beam Primary.

Parents wanted the school registered, and the education department to provide essentials such as chairs, desks, and crayons. But the Department said its lease on the land had ended and the mobile classrooms were needed at other schools.

On Wednesday, a crowd of parents and community members had gathered around the gates of the school. Vetus Schola Security Services personnel were guarding the gate as men in blue uniform began dismantling classroom containers.

“We were all shocked to wake up and find people demolishing the school,” said Mandisa Renen. “All we asked is that the Department of Education register the school and give us books for the children. That’s all. What will happen [now] to our children who don’t have a school to go to? There are only two schools in the area, and they are both full. We don’t have money [for transport] to send our children to schools far away.”

Residents also raised issue with the fact that the dismantling of the school was carried out just as extreme weather hit Cape Town.

“What about the kids that will come to school [today],” Godfrey Jonas asked. “They can’t stand outside in the rain. It seems like this was their [WCED] plan without consulting anyone.”

Director of Communication for the WCED, Paddy Attwell, said the Department obtained the interdict to evict the “illegal school” on 6 March. “The Sheriff of the Court followed due process in executing the order today with officials from Public Works. There is no connection between the legal process and the storm that hit the province on Tuesday night,” he said.

“The WCED has placed three additional mobile classrooms at Marconi Beam Primary and two at Tygerhof Primary, to accommodate the learners from the illegal school, and has deployed additional teachers to these schools … The mobile classrooms from Sinenjongo High will now form part of a stock of 54 units that the department will deploy at various schools in the province to accommodate about 1,600 learners who urgently need classroom space.”