Australian mining company pulls out of Wild Coast mine 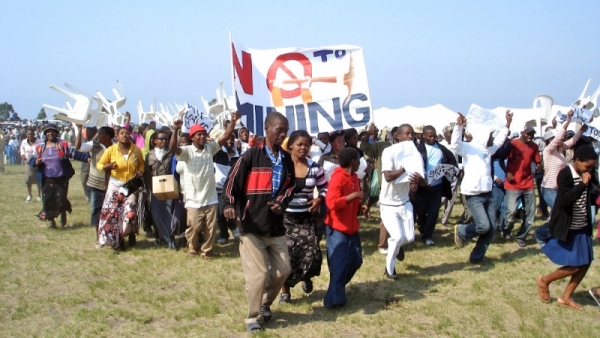 A 2008 protest against mining in Xolobeni. Photo by Ken Gaze.

The Australian mining company Mineral Commodities Ltd (MRC) announced today that it is disinvesting from Xolobeni on the Wild Coast.

Mining in Xolobeni has been surrounded by controversy and violence. In March this year, Sikhosiphi Bazooka Rhadebe the chairman of the Amadiba Crisis Committee, a local organisation opposing mining in the area, was assassinated.

MRC stated: “In light of the ongoing violence and threats to the peace and harmony of the local Xolobeni community, the company accepts that the future viability of the Xolobeni Project should be managed by stakeholders and organisations exclusively owned by South African people.”

MRC therefore is divesting its 56% interest in Transworld Energy and Resources, the entity which owns the Xolobeni Mineral Sands Project, to its BEE partner Keysha Investments.

It is not clear if this means that attempts to mine Xolobeni will continue, or how Keysha Investments will fund the purchase of MRC’s share of the project.

GroundUp will be investigating this story further.