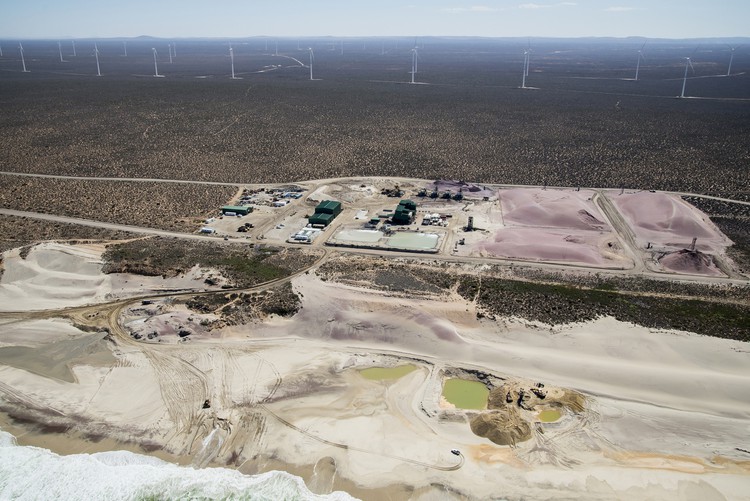 The Tormin minerals sands mine on the West Coast near Vredendal that generates close to 97% of all revenue for controversial Australian mining company Mineral Commodities Ltd (MRC).

Australian company Mineral Commodities Ltd (MRC) was quizzed at the company’s recent 2019 annual meeting about financing a reward for information about the death of Xolobeni anti-mining activist Sikhosiphi “Bazooka” Rhadebe.

At the AGM in Perth most questions – including about specifically targeted social spending – were batted away with a “put it in writing” response.

However, MRC executive chairman Mark Caruso did answer one question directly. He was asked by Louis de Villiers, a South African lawyer and environmentalist now living in Australia, whether MRC shareholders would offer a substantial financial reward for any information leading to the arrest and conviction of the killers of Xolobeni anti-mining activist Rhadebe, gunned down at his home in March 2016 by two men posing as policemen.

Caruso’s reply had been unequivocal, De Villiers reported: “It was quite a fiery meeting. Caruso said outright he’d not agree to offering a reward, and for the rest he harangued me before closing me down again, saying I should table the questions.”

In a statement after Rhadebe’s murder in 2016, MRC said it was “not in a position to comment with any authority on the incident” but any claims it was in any way implicated were “simply unfounded”.

“The company does not condone violence in any form … [and] will not engage in any activity that incites violence. The company will cooperate fully with any investigations into this incident.”

De Villiers, who held a proxy from a minority shareholder, raised questions relating to MRC’s operations in South Africa at both its 2018 and 2019 annual meetings.

At the 2018 meeting, he asked whether the MRC board had approved the “SLAPP” suit (Strategic Litigation Against Public Participation) legal action currently being brought by Caruso and other MRC-linked plaintiffs against six South Africans, with damages’ claims totalling R11.75 million.

De Villiers also asked for clarity on an apparent contradiction in MRC’s 2017 annual report: the company had announced in 2016 that it was divesting from its Xolobeni mining rights but at the same time apparently remained interested in mining there.

He said he had not got any substantive answers at that meeting.

At this year’s meeting, De Villiers and Colette Rhoding, a retired lecturer with an interest in environmental issues, who also held a proxy, again posed questions.

Rhoding asked why information about the “SLAPP” suits did not appear in MRC’s 2018 annual report, despite presenting a “significant and material” financial risk for the company.

De Villiers asked whether MRC had offered to help police find the murderers of Rhadebe and “to ensure calming of the social turbulence within the [Xolobeni] community”, and also whether shareholders would offer a reward to help find the killers.

Asked by GroundUp to comment on the questions raised at the annual meeting, MRC company secretary Peter Torre said Caruso had provided “a reasonable opportunity” for shareholders and proxy holders to ask questions.

But, he said, the annual meeting “is not a forum for one shareholder or proxy holder to dominate such questions”.

“The company’s preference at all meetings is to take questions on notice and provide a written response … given the sensitivities to any statements made by the company and the prolific misquoting and misinformation that circulates regarding the company.”

De Villiers had been asked to provide his remaining questions (from the 2018 meeting) in writing and the company had compiled detailed answers, “which took a considerable amount of management time,” Torre said.

“Given the confidential nature of some of the answers, the company sought to obtain a confidentiality agreement with the shareholder [for whom De Villiers held a proxy] … This is common practice amongst all public listed companies prior to engaging with any counterparty in the provision of confidential information.

“Unfortunately the shareholder had divested their [sic] shares immediately subsequent to the AGM and as such, the information could not be provided.

“Questions tabled at the 2019 AGM will be responded to directly to the shareholder.”

Torre did not refer to the question or response about the reward.

This week, De Villiers filed a formal complaint with the Australian Securities and Investments Commission (ASIC), citing MRC’s refusal to allow any form of recording device to be used at the annual meeting and noting that the company had not replied to written questions because it first required a “confidentiality clause” to be signed.

“This appears to be nothing other than an intimidatory tactic,” he wrote in his complaint.

In his response to GroundUp, Torre also said that in terms of MRC’s constitution, the chairman of MRC’s annual meetings was allowed to refuse the use of any “pictorial-recording or sound-recording” devices.

“The very fact that the proxy holder present who asked the questions … was representing a shareholder highlights their knowledge that only shareholders can attend, otherwise their modus operandi to purchase shares just prior to the meeting and dispose of the same shares immediately subsequent to the meeting would not be necessary,” he said. “Notice of Meeting is distributed to all shareholders, and all shareholders are welcome to attend.”